The Wandbearer Trilogy, Book 1: Juggler In the Wind by Wim Coleman and Pat Perrin

Why hello there!
How are you this fine and freezing morning?
Seriously, it's Florida....and it's also 27 degrees and suppose to go down to 18.

Yep.
Winter is upon us and WOW did it hit fast!
Oh well...I'd much rather it be too cold than too warm.
Why?  Well simply put...you can always put more on, but when taking things off, you sorta reach a point of public decency and then you're stuck....so yeah, BRING ON THE COLD.  Anywho... 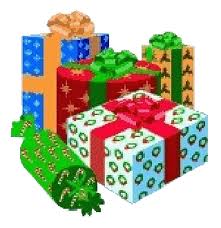 You may have noticed the sudden influx of all things contest related here at Satisfaction for Insatiable Readers, what with five contests currently running (~whispers~ and more to come).  Tis the season is what I say!  The perfect time of year to spread a little cheer to readers round the world and there's a little something for every taste too!  From the Chronicle Books Happy HAUL-idays Giveaway to Toto's Tale, a chance to win Other Goose or the wordy nerdy fun of Euphemania, plus a new addition to the holiday reading fun with The Christmas Chronicles....yep, I'd say there's probably at least one contest to suit each of you, so feel free to enter before you miss out!

Today's post isn't all about holiday magic, though that is available in plentiful amounts, it's about magic in places, things, and people that seem ordinary at face value, but extraordinary up close and personal.  It's about one boy discovering where he comes from and what lies ahead for you see he, himself, may just have a bit of magic about him as well.  Without further adieu, today's book of choice is.... 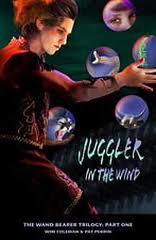 The Wandbearer Trilogy, Book 1:
Juggler In the Wind
by
Wim Coleman & Pat Perrin

Randy Carmichael is a young man with a lot going for him...no really, it's true. He's a star student, rather handy with sets for the drama productions, deemed trustworthy by parents and teachers alike...and happens to have a home life that is a bit less than desirable. His mother works hard to keep a roof over their heads and food on the table but life seems to get the best of her and she often turns to the bottle for support. No worries, Randy is quite safe as she generally keeps the issue under wraps...that is until recently.  Some new arrivals in town have her stressed out even more than usual...but why?  Better yet...who? Good question.  Performers in the Circus Olympus would be the short answer, but that is only skimming the surface of the truth, after all what could possibly stress her about the circus?  It's generally billed as one of the greatest shows on earth?  Ah, but you see this is no ordinary circus and it's one his mother is all too familiar with.  Secrets long forgotten and hazy at best are hidden all around, secrets that involve Randy on a personal level....and ones which he fully intends on uncovering for better or worse. 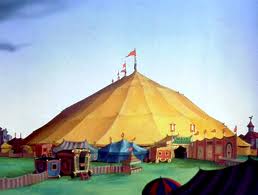 I must say, I thoroughly enjoyed this first book in the WANDBEARER TRILOGY...more so than I even anticipated that I might. The book opens on the arrival of the circus as young Randy catches a glimpse of it through his window.  Ironic how it decides to take up camp so close to the one family that shares in it's mysterious past, is it not?  (More like fate....dun dun dun....)  The opening scenes actually brought to mind a similar sequence as seen in the first few minutes of the Disney movie Dumbo.  You know (or perhaps not....I shall explain....) where the crew is working in the pouring rain at night side by side with animals and performers to raise the roof on the big top (otherwise known as the main arena/tent)?  Subtract the elephants, add in a bear, minus out a few dozen people and  you've got it.  It evokes the same imagery and anticipation verbally as the scenes viewed many times over do.  A grand start if I may say so...moving on... 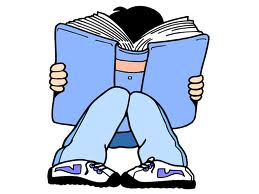 The storyline was mostly focused on the circus in its travels (and escapes) and Randy's time with them, though exactly why he is there remains veiled (until the end).  He knows why....to uncover its connection to his mother's downward spiral emotionally...but he doesn't understand fully.  Throughout the course of his adventure we learn much about Randy's character, his sense of self, and yet not enough to solve the riddle posed fully.  The performers that make up this often merry band of travellers are quite the group indeed and are unintentionally (or perhaps intentionally?) hiding things from their new friend as well as themselves.  They have powers that are fleeting; noble intentions which flicker into existence like a candle in the wind.  Gumption to move on to the next town and do it all again for a dwindling crowd one moment...and the next they are zapped of both energy and spirit.  It presents a rather interesting quandary but a happy one all the same as it allows for further adventures to be written and the past (and future) of the characters to be uncovered and explored.

The only thing I had a small issue with (and it was indeed small, but still noticeable) was one part in which Randy, our main character, does a sudden 180 in regards to his confidence. It seemed too sudden and without proper explanation....but the rest of the story flowed quite well and I will certainly be interested in finding out just what is in store for our unlikely "family" as the series continues.  The ending certainly leaves one intrigued for what awaits them once they reach the....oh no you don't...I'm not spoiling it for you.  (hehe)


Recommended reading for fans of the YA genre of all ages. There's nothing questionable in the text that I recall...unless you object to a little mystery, a little magic, or the draw that fate and destiny can have on the soul.  It truly was one of those understated reads that often gets overlooked by the general population; hopefully my review was able to shed a little light on it for you.

Special thanks to Monserrat at Chiron Books for the review copy.  (THANKS!)  To find out more about this new series and their full catalog, feel free to visit them online.


Until next time...happy holidays...and happy reading!

What part of Florida are you in?

Wow! I'd never heard of this one before you reviewed it. Definitely not one I'd pick up based on the cover, but your review absolutely changed my mind. The story is very intriguing. Thanks so much for the great review!

The1stdaughter: Egad, you haven't? Just kidding...it's one of those that can fly under the radar, and I definitely agree on the cover, but yeah, I think you might like it! ^_^