BLOG TOUR: The Silence of Bonaventure Arrow by Rita Leganski

Hi there!
Welcome back to the only place to be when your mood ring changes to that unnamed color between the blue of the sky on a cloudless day and the blue of your favorite sweater...Satisfaction for Insatiable Readers.

Today, we are playing host to the two part closing (check out the other stop over at 50 Books Project!) of a blog tour courtesy of the FAB folks over at TLC Book Tours. (Hi, Trish!) If you haven't checked out all the fun they have in store for you and yours, you definitely should...I know I've recently discovered a few new favorite reads thanks to their promotions, including the one I'm about to reveal.  It's a title that reached publication this past February with Harper Paperbacks and tells a most curious story.  No, wait...curious isn't quite the right word because it is SO much more than that.  *ponders*  Perhaps instead of pinpointing it like a species of butterfly to a board (though I'd never do that...poor butterfly!), I'll just come right out with the review.  Sound good?  Hope so seeing as that's the route I'm taking...hehe...but given the time to answer, I'm sure you would have agreed as well ESPECIALLY for this title.  Without further ado, today's blog guest and book of choice is... 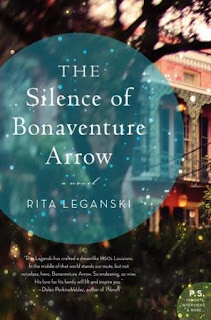 The Silence of Bonaventure Arrow
by
Rita Leganski


Conceived in love and possibility, Bonaventure Arrow didn't make a peep when he was born, and the doctor nearly took him for dead. No one knows that Bonaventure's silence is filled with resonance—a miraculous gift of rarified hearing that encompasses the Universe of Every Single Sound. Growing up in the big house on Christopher Street in Bayou Cymbaline, Bonaventure can hear flowers grow, a thousand shades of blue, and the miniature tempests that rage inside raindrops. He can also hear the gentle voice of his father, William Arrow, shot dead before Bonaventure was born by a mysterious stranger known only as the Wanderer.
Bonaventure's remarkable gift of listening promises salvation to the souls who love him: his beautiful young mother, Dancy, haunted by the death of her husband; his Grand-mère Letice, plagued by grief and a long-buried guilt she locks away in a chapel; and his father, William, whose roaming spirit must fix the wreckage of the past. With the help of Trinidad Prefontaine, a Creole housekeeper endowed with her own special gifts, Bonaventure will find the key to long-buried mysteries and soothe a chorus of family secrets clamoring to be healed.


Beauty may be in the eye of the beholder but it is also between the pages of this book.
This is one of those rarer works where to read it is to love it and to describe it in a scant few words while conveying the magnitude to which it impressed you or rather made an impression upon you is quite near impossible.  Nevertheless, for the sake of sharing this remarkable read, I shall endeavor to try.

The words will carry you away to the streets of New Orleans to the very doorstep of one particular house on Christopher Street where secrets are a plenty but borne more of self-blame than actual guilt.  The characters affected by these secrets are wide spread and how it affects them individually manifests in many ways, but in the end, as with all secrets...the truth shall set them free.  Alas, I'm only a few sentences into this post and I'm already ahead of myself.  You see, the secrets are not the first thing we encounter or at least not fully, nor are they the heart and soul of the novel; no, that belongs to Bonaventure Arrow entirely and that is how this story begins. 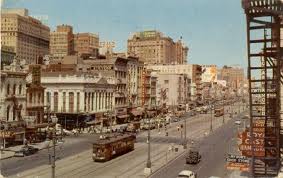 The birth of a child, the welcoming of a new life into this crazy world even in 1950's Louisiana was a cause
for celebration of great magnitude, but the balloons and congratulations will not be arriving in droves for as much of a gift as this arrival is (and the extent to which that gift if known will be years in the coming) there is a deeper sorrow lining the hearts of both the born and just born.  A life has been snuffed out as it was really just beginning and the reasons behind it seem to be nonexistent.  A crime is one thing but a senseless crime where no sense can be made even if it is a skewed version of reality to ascertain the "why" of such an event is even more burdening somehow and the ladies in the life of our newly born Bonaventure are all too ready to carry the blame as their own.  Warranted?  Hardly, but kind hearts touched by the badness of life can not be blamed for supposedly acts of heroism; they do what they do until the pure light of truth and understanding can set them free.  That light would come from the heart and mind of a child (with a little help both from above and from a kindred spirit on earth)...but not the voice.

Yes, Bonaventure had great things in his future, things that we'd be lucky to have a small hand in if given the chance in life, but he'd have to accomplish these things sans voice.  It's not that he didn't have the right equipment or that it was broken exactly, but rather a type of disconnect that happened when the harshness of life touched him while still in the womb.  In it's place, Bonaventure was graced with a superior sense of hearing that would continue to develop throughout his life allowing him to hear everything from colors and plant life to the words off a page when not spoken aloud to the birth of a star in the cosmos.  I found it amazing how something that could be so limiting on the outside became such a gift and was conveyed in such a way that it wasn't an obstacle at all, even for the reader (a feat indeed!).  Bonaventure knows he is different, his own experiences along with the voices of those he loves and those who love him have told him as much and yet they don't let it get in the way of his growth .  I can't even begin to imagine what it must have felt like to have to hide that much of yourself for fear of being singled out nor the elation that each new sound, each new emotion heard brought.  But I digress, there are more wonders to discuss... 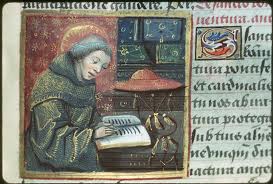 If you can believe, there is magic here beyond Bonaventure's skills, though they are a key to solving the mysterious equations running throughout, and they run a wide range of topics if ever I've seen.  Love found to love lost, debts created unwillingly and repayment taken without mercy, the discovery of secrets held and perhaps most important of all, the forgiveness that is within each of us to give.  Each character we are introduced to also brings their own flavor to the story, some more favorable than others.  We have Grandma Roman who holds herself and her faith above all (sounds nice enough, but the poor soul...her fate really is deserved), Grande-mere Letice that carries the weight of the world on her shoulders but in truth it wasn't for her to hold, Dancy the mother of our beloved Bonaventure who again takes too much blame for events that transpire but that is often the fate of those whose hearts love has touched.  In the background but only just, we have William the father that Bonaventure had never known (...in person at least), Gabe whose work helps bring life back to the broken family even when reciprocation is not a possibility, and one whose companionship seems odd in this little gathering we shall call the Wanderer.  He goes by no name for most of the story as he has forgotten that where he has been and who he once was; a poor fate to suffer, yes, but perhaps not when the deeds done since would break any piece of heart that might have remained his own.  His story is uncovered, in time...but you'll have to listen close.

In the end, I have to say this is one read I'll be recommending for many moons to come if not for the sheer enjoyment it provided but for the bittersweet symphony that is its sum whole.  The story alone is wonder-mous enough and the history that is sprinkled throughout provides a connection with our reality, but the lives created within the pages deserve to share their story...and I can think of no better way than through the leaves of a book.  After all, Bonaventure would approve of our volume-less method and the joy that it brings to our hearts would please him fully...it might even earn an inclusion in his box of joyful noises and memories.  This work has brought up many ponderings besides the obvious one of which would be the tale within.  I mean can one even wonder big enough to guess the stories that surround us on a daily basis?  I would love to know just what the color blue sounds like or the stories that a book can tell above and beyond that which we read off the page. Remove all the chatter and dive into the meaning of a look, the endless depths of the written word, the beauty of nature and the kindness of a gesture.  What would one be able to really hear if given the chance?  The possibilities are endless.

Review copy received courtesy Trish at  TLC Book Tours.  (THANKS!)  For more information on where this book hopped, skipped, and jumped across the blogosphere, check out the official tour schedule.  To discover what's up next for this blog touring phenom, pay a visit to their official website, like them on Facebook, or follow along on Twitter!  To connect with author Rita Leganski, seek thee out her Facebook page...which I happened to see included a few listings for upcoming book signings so be sure to have your calendars at the ready!  This book was released the end of last month via Harper Paperbacks so be on the look out for it on a bookstore shelf near you.  To discover more of the bookish worlds HarperCollins Publishers has opened the door to, be sure to visit their official website, add them on Google+, like them on Facebook, pin them on Pinterest, or follow along on Twitter.


Until next time...make time to truly listen to the world around you...and happy reading!

Beautiful review darling. I've been pondering this one. Thanks for your thoughts. :)

Your love of this book comes across very clearly! It sounds like such a LOVELY book, and from the way you describe how you felt about it, I think I'd have very similar feelings if I read it.