Hi there!
Welcome back to Satisfaction for Insatiable Readers...the place to be even when it's cold and dreary outside, because the books are always fresh and piping hot.  ^_^ 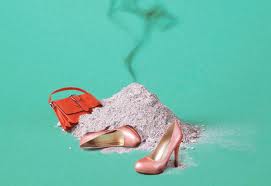 So, if you're a frequent visitor here to the site, (*HUGS*) you may have noticed my silence over the weekend.  It wasn't planned, it just happened.  One of those OMG-why-did-I-schedule-SO-many-things-in-one-week bits and frankly, I was tired.  So, since this is suppose to be fun, suppose to be enjoyable and I'm really not wanting to end up taking a hiatus like so many other of my bloggy friends have had to do from overkill...I took the weekend off.  Case closed.  End of story...well, THAT story at least...because today, I'm back and ready to share all about a recent read with all of you.  Ready?  Here we go!

Today, we taking a look a the first book of a series by author Annie Rachel Cole.  It's genre label is Young Adult and it fits both into the Fiction and Fantasy/Paranormal categories with a large amount of excitement, danger and what not throughout.  If you like your YA served up this way with a healthy dose of the gods (you know, Zeus, Hades, etc?), you are in for a treat!  Today's book of choice is... 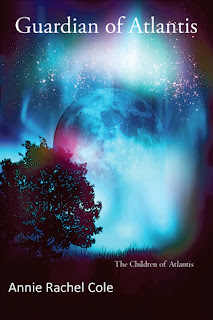 Will Raven find the inner strength she needs to survive?
Will she be able to protect Atlantis?
Sixteen-year-old Raven Weir has a somewhat normal life until she receives a mysterious necklace…a necklace others are willing to kill her to get because it contains the key codes to Atlantis. Now she finds she’s the only one standing between Atlantis and those who want to use the power hidden there to take over the world.
And Zeus is at the head of that line.
On top of worrying about social acceptance at school, Raven has to get control of her growing powers before she harms someone. And it doesn’t help that the alpha Hellhound at school is attracted to her while members of his pack are trying to kill her. And then there’s the whole biological parent issue. Finding out you’re adopted is huge, but discovering you’re actually the daughter of Medusa and Poseidon will definitely cause problems.


Oh yes, there will be drama, teenage angst and secrets uncovered but really, who can blame Raven when what you're learning about yourself and your family is such a shock!

Descended from gods, no problem...but this duo when revealed makes quite the pair....and explains a few of Raven's unusual talents.  She's your normal average teenager, or so she thinks, just with blue hair and in possession of a new locket that seems to emanate with power.  Okay, so the locket is not THAT surprising, it is her birthday and all...presents are a must!  But who did it come from?  Certainly not her "mom" and what, why am I putting "mom" in quotation marks like that?  Hehe...wouldn't you like to know... 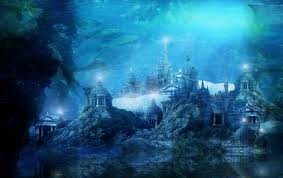 Suffice it to say that nothing is what it seems and when I say nothing, I pretty much mean NOTHING.  Raven's new school is not your average school or rather isn't attended by your average students nor staffed by your average teachers and more.  *gulp*  Nope, these folks have real bite (and I do mean BITE! *chomp chomp*) and a certain disdain for our new student beyond the fact that's it's mid school year when she transfers in.  Yes, something is definitely up and everyone seems to know something about it...except our leading lady!  *blink*  You read that right.  Raven Weir, star of our show (for the most part) doesn't have a clue but she's about to get one in a hurry because if she doesn't she might be receiving her final message louder and clearer than ever intended...i.e. she'll wind up dead.

There's nymphs and Hellhounds, gods and goddesses, oh yeah...and humans.  Almost forgot about us what with all the other worldly running around.  It's chock full of things you know and things you don't (which allows for further exploration outside of the book...kudos to the author for that!) but together they create a world of reading fun.  It teaches us that life is a journey, yes, and there will be those along the way that can be trusted (like Ethan...*mini-swoon*) and those that should have you running the other direction (nope...not telling you who, you'll have to figure those out as they come) but each situation presented is another choice and what we decide helps to make us who we are in the end.

So, it's a story about finding our true selves, from our birthright to who we want to be, discovering what fate holds in store for us...and writing a new ending if it doesn't fit our design. Sounds great, right?  It was...but there was a wee little "off-ness" worth a mention.  My only true gripe would be some of the transitions.  One moment we're on one topic and then POOF we switch gears with no rhyme or reason.  Also there's a time or two when the "win" whether it be in thought or fight comes too quickly, as the character or characters simply "fold".  Both along the same lines of issue with enough instances to irk this reader but not enough to impede my enjoyment of the read overall.  Certainly a book I'd recommend and an author I'll be watching for future works...

In the end, a great new addition to the Young Adult genre that is sure to fall right in line with other greats leading the way with mythology laced stories, given the right audience.  From page one, we're plunged right into the story without any further explanation than Raven herself is given...confusing, somewhat but it also ties you to her fate all the more and THAT worked in her favor!  Creating a connection with a character can be a challenge but you'll care about our snarky, kick butt, take no prisoners (even if she is quaking inside) heroine in the making and root for her without abandon.  You'll want her to find some measure of acceptance and true happiness as well as learn to live with the truth of who/what she is...and how it could affect us all (well, literary us...not literal us).

Did I mention this is the FIRST book in a series?  *looks back*  Why yes, yes I did...and that being noted, BOOK TWO published this past December!  The title is Wrath of Hades and if I'm being honest, I can't way I would have connected it to the first book by cover OR title despite the obvious name drop.  You all know from my past ramblings, I'm a BIG fan of series that tie their covers together in some fashion; this one...it's fine and dandy and gives us a glimpse of what Raven looks like according to the author but for me, just doesn't hold the appeal of book one.  Cie la vie...good thing we don't judge a book by its cover alone, right?  Right!  Curious to see where she takes Raven and "friends" next time around, book 2 is definitely being added to by wish list.

SIGNED review copy received courtesy of author Annie Rachel Cole.  (THANKS!)  For more information on this series as well as her other works, be sure to stop by her blog, check out her official site, visit her GoodReads page, pin her on Pinterest, or follow along on Twitter.  This book is available now in both print and digital forms so seek it out at your favorite retailer of choice.  Need a head start? Just click on the links embedded here.

Guardian of Atlantis sounds like my kind of read. Great review as always, I'll be sure to keep an eye out for this.

Hmm, I haven't thought about Atlantis in a while. Sounds like a great read. :) Thank you.

Thanks Gina for the AWESOME review!!! The third book in the series will be out toward the end of summer.