Hi there!
Welcome back to Satisfaction for Insatiable Readers...the place to be when you're in the mood for bookish conversation because you know, there's nothing we LOVE better.  ^_^  Always happy to oblige a fellow reader. 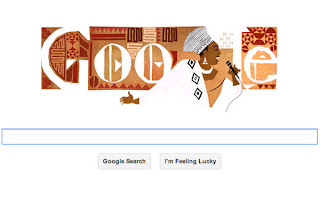 Today's book choice was selected by the fates, or rather Google and their nifty doodle drawings celebrating random days, holidays, events and everything in between.  I had pulled up the old search page while on the hunt for a pic for a friend's post and noticed today's artwork at the top.  Curious, I moved my mouse to hover over the image and discovered it was the 81st birthday of...Miriam Makeba.  *blink*

Okay, so you're probably wondering who on Earth that is and why it would give me pause in the slightest...am I right?  Well, first things first.  Ms. Makeba was "singer and civil-rights activist that many called "Mama Africa"...who played a big role in several important cultural movements across her 50-year career".  So basically a music maker, or ARTIST, who spoke out against discrimination, or INJUSTICE; two points that when combined with the singers first name add up to my moment of pause.  Miriam.  It's not a name you run into everyday or at least I sure don't, not even in the literary world and upon seeing it it instantly clued me in to a book I just finished (literally, like LATE last night) who just so happens to have a key character named Miriam.  Coincidence...or fate pointing today's book of choice?  Hmm.  You be the judge, but I'll be the jury and present today's featured title.... 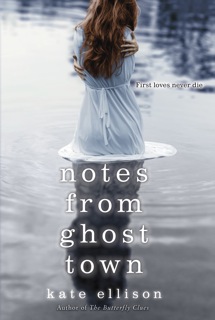 Olivia Tithe was excited for the summer and spending it with her best friend, Stern. But that was ruined when he was mur­dered...by Olivia's mother. Flashing forward, Olivia's life has been transformed since that awful night.
After her mother's incarceration, Olivia must move on, but she hates her father's new fiancée, Heather, and with her dad's new real estate development (she calls it Ghost Town) in the works, she barely sees him. But a new boy, Austin, has kindled feelings inside her that she hasn't felt since Stern's death.
Arriving at the same time as this new guy is a mysterious note that brings Stern's murder back to the forefront; Olivia knows that she must discover the truth behind her friend's death once and for all.

Hmm.  How to best summarize this one because while that synopsis goes a long way, it's not nearly half of what's seen, uncovered, explored or felt in this work.

First, we open with a summer in the making, new feelings for old acquaintances realized and enough time and youth to act upon them without risking our final "forever"...or at least that's the way it seems.  One kiss.  One monumental change not voiced.  One misunderstanding between friends that could have been more.  One unforeseen chain of events knocked into play by the dastardly deeds of another and that distant forever is snuffed out like the flame of a candle in the window on a dark and dreary night.  They never got their chance at happy-ever-after and if that wasn't bad enough, the person who gave her life is the one who took away that very chance...or did she?  All signs point to Olivia's mother, Miriam Tithe.  (See?  I told you there was that name! ) being the one responsible for Stern's death, after all she was found with the body, blood on her hands, confessing her sorrow for events too dark to understand.  Add to that the fact that she was off her med's at the time and well, it's pretty easy to blame the less-than-100%-sane person...but that doesn't always mean that's what REALLY happened and if Stern has anything to say about it, the truth will come out for better or worse.

What's that?  You thought Stern was dead?  Oh, he is...quite, but the title of the book IS Notes from Ghost Town so the involvement of ghosts in the story shouldn't come as a big surprise, though there are surprises, I assure you.  I'm not one to reveal the guts and glory of any story, as I much prefer to leave those discoveries to your own reading adventures, but I will say this the way the ghost versus living interactions are cataloged here are rather intriguing. It's not your usual haunt with flying objects and moans of terror or even a carbon copy of Ghost (the movie, with Patrick Swayze and Demi Moore?) though there are moments of closeness that will break your heart.  It's got its own vibe and its own story to tell and the duo that make the magic happen here are a memorable pair.  Now, about that mystery...

It's a search for truth that reveals a lot more than anticipated about many more people than you would have thought and takes you to places you never would have imagined...even the Gray Space which though murky in actual form stays with you after the story's end.  Now I for one actually guessed who was involved with everything (as many of you probably will too...the dots on that part aren't all that hard to connect), but the exact "why" was definitely kept in the dark so the story was still enjoyable straight through to the final page turn.  In fact, you'll be hanging on the edge of your seat to see if your preconceived notions come true because the author keeps you involved all the way through; even the final pages play a BIG role in everything that's transpired.  Good stuff if I do say so myself, and speaking of good stuff, there's an aspect of life that's explored that's common place for some but oh-so-curious to most that afflicts our young lead.  Color blindness. 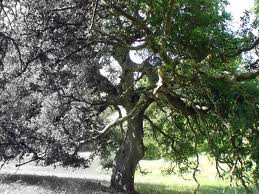 In Olivia's case, it's not something she was born with or was caused by some major accident...it just happened.  Unexplained.  No warning.  No cause to speak of.  Just one second, a world brimming with color hear and there to be explored with both the eyes and the mind, and then POOF; shades of gray on a whole new level.  The author's depth of exploration into this phenomena was very curious AND moving.  There's a scene where Olivia is talking about food and notes how she never realized just how the bright yellow skin of a pepper made it taste so much better.  Now everything is a variance on gray.  Can you imagine?  Is it any wonder she doesn't want to eat anything...everything is gray hued solids, mush or liquid?  Dressing herself is a task and a half but she finds an adorable creative way to get the job done...thank you Wynn (such a cutie!)!  Let's not even talk about driving, which she does in fact do, and any other social interactions that require color vision to successfully complete...and then there's the fact that she's an artist, or rather was.  When things go south, so does her career and ambitions in this arena.  You'd think it'd be easy to switch to black and white media but not so when it's not a choice but a forced change.  To make things even more interesting, she keep this little, well...not so little change to herself.  That's right.  A change this big and she's struggling with it all by her lonesome because the one person she did reveal it too pretty much called her crazy and she's afraid that it means much more dire changes for her ahead.  Such a shame...

In conclusion, it's a great new addition to the Young Adult genre that won't surprise you in the ways you might imagine but in all the ways you didn't while pulling you along for an emotional roller coaster ride through the depths of despair, the peaks of happiness and everything in between.  You'll see love found, lost, and discovered anew.  You'll put your sleuthing skills to work as events begin to reveal the facade that everyone seems to be hiding behind, whether they realize it or not and you'll be reminded to give everyone a fair chance no matter how sane or out-of-this-world they may seem.  It's a curiously deep story that never leaves you treading water for long as you seek to find the heart, the truth and the real "ever after" in all its gray hued beauty.  Definite recommended for young adult readers and beyond ; some of the concepts dealt with are heady (drinking, murder, suicide) but the overall journey is well worth the read.

ARC for review courtesy of Casey at Media Masters Publicity.  (THANKS!)  For more information on this promotion as well as their upcoming tours, be sure to visit their official site.  This book was released February 12th, 2013 via Egmont USA and should be available now on a bookstore shelf near you. To discover more about this title, be sure to visit the publisher's site, like them on Facebook or follow along on Twitter.  To see deeper still into the worlds of author Kate Ellison, check out her blog, or one of her Facebook pages.  Now, back to my little statement of "available now", have I got some news for you!

Thanks to the generosity of both Media Masters Publicity and Egmont USA, I have the opportunity to give YOU A CHANCE TO WIN a copy of this very book to call your own!  Excited?  You should be.  Here's all the details...

(1) hardcover copy of 'Notes from Ghost Town' PLUS (1) newly released paperback edition of 'The Butterfly Clues'!

How to enter...
Just fill out the Rafflecopter form below and BAM, you're in it to win it!
Of course, spreading the word is MUCH appreciated as well.  ^_^

The rules...
...open for entries from Monday, March 4th, 2013 through Sunday, March 10th, 2013 at midnight CST.  Winner will be selected/contacted on Monday, March 11th, 2013 and have 48 hours to respond with their FULL NAME and MAILING ADDRESS for prize send out.  If the information is not received in the given time frame, a new winner will be chosen.  Open to US and Canada residents; no P.O. Box's please.

So there you have it.
You know what to do.

Until next time...GOOD LUCK to all that enter, thanks for stopping by either way and....happy reading!

Have to admit that the cover doesn't really do much for me, but love your review and now I want to read it! And suddenly being struck colorblind? Whoa! Especially for an artist! Another great review! :)

I'm intrigued with the mysteruous premise. Sort of a ghost story and then a mystery. It's interesting and I don't know what to expect.

Please Enter Me In Your Giveaway.
It Would Be Great To Win A
Copy Of NOTES FROM GHOST TOWN And
THE BUTTERFLY CLUES by Kate Ellison.
In Response To Your Question Of
What sparked your interest in THIS book?
I Enjoy Reading
And Discovering New Authors.
Thank You For Having This Giveaway!!!