Read Across America: After Party

Hi guys!
Welcome to the Read Across America after party...the place where we'll catch up on just what went down during yesterday's celebration.  First up, a quick recap on how things went at our local event.

Though decorations (I had about oh I don't know, 1 day's notice that I'd be heading up this one....which resulted in me having about 20 minutes to make something out of nothing; go box cutter, cardboard and leftover streamers! ^_^) and attendance were smaller this year (we had planned attendance last year with 2-3 classrooms), the small group we had LOVED every minute. 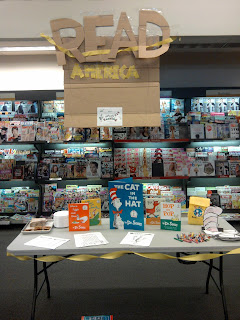 This is the initial set up they walked in on though the seating/coloring area was not captured.

First things first, we had to get the kiddos decked out in proper Seuss inspired gear!  So, out come the paper hats, crayons and coloring time.  We had classic red and white hats, blue and green, pink and white for the Hello Kitty clad little girl and several other variations...but as Seuss inspires creativity, any color was up for grabs.  Once colored, I got to help some of the wee ones but their creations on in preparation for ...snack time.  Chocolate chip cookies in hand, they were ready for the main event....STORY TIME! 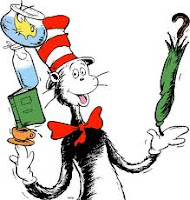 This year's selection was The Cat in the Hat, appropriate right?  ^_^  I started reading the story aloud to them and they were enraptured in every image, every turn of the page.  There was even audience participation as the kids guessed what might be in the box the Cat breaks out or what might happen to the fish as he balances on top of a cane.  More often then not, they guessed correctly which only made their smiles brighter.  At the story's end where it asks what they would have done, their answers were surprising or perhaps not...most wouldn't have told their parents which of course made all the grown ups glance around at each other (hehe) but one little girl said she would have told her Mom everything because that's the right thing to do.  Too cute. 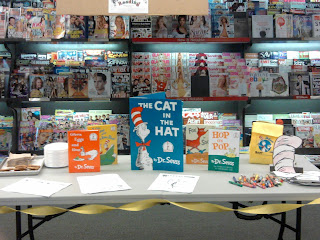 Even though the main event was over, I left the set up displayed throughout the day to encourage kids to join the fun with coloring sheets, making their own hat, tic-tac-toe and more.  You know what?  It worked!  There was a slew of kids (and adults) walking around Seuss-ified...totally smile worthy.

So, all in all despite the lack of fluffy truffula trees like I had last year and Seuss quotes from around the globe, we had a blast.  I guess it just goes to show you that sometimes even the smallest of efforts can make the BIGGEST impacts.

So...how did YOU spend Read Across America day?
Attend any fun events?
Throw any of your own?
Do tell!

Email ThisBlogThis!Share to TwitterShare to FacebookShare to Pinterest
Labels: 2013, Read Across America

Oh what fun! And I'm impressed by your resourcefulness! :)

Juju: Thanks my friend! It wasn't my best work but all things considered, it worked. ^_^ SO GLAD they had fun...that was the BIGGEST reward.

Sounds like such fun was had by all. I'm impressed that you managed this in such a short space of time.