A Reader's Read: Last Train to Omaha by Ann Whitely-Gillen

Hi guys!
Welcome back to Satisfaction for Insatiable Readers…the place to be when you’re in the mood for something different, something off the cuff, something you may not have paid attention to otherwise, but thanks to moi, you’re bound and determined.  ^_^  Just kidding…well, sorta.

Today, we are featuring a title that’s what I would call a reader’s read.  What I mean by that is it’s not a book you simply pick up and breeze through.  This is one of those titles that you take in slowly, form a connection of some sort with the characters and really have to feel your way through.  It doesn’t make it a bad read by any means, but it can make it a bit weighty; perfectly understandable when all the secrets we’re dealing with come to light.  Ready to meet today’s book of choice?  All aboard for the… 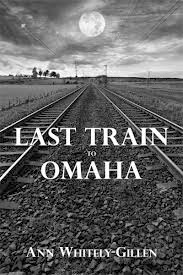 What happens when a bright young man’s promising future is tragically derailed at the age of eighteen?
Thirty-five-year-old James Milligan, the solitary and impenetrable chief architect at one of Chicago’s leading design firms, has never recovered from the gruesome death of his best friend nearly two decades before.  He’s learned that a distant heart is the only way to shut out the nagging guilt and pain that threatens to capsize him at any moment.  Only the dying veterans at the Aaron Milligan Palliative Care Center know the depth of the overwhelming compassion that James harbors within himself, and he is determined never to let anyone else into his heart – or his future – again.
However, when caring and patient palliative care nurse Rebecca Doyle enters his world, his hardened exterior begins to crack against his will.  Will Martin Diggs, the charismatic and perplexing Vietnam War veteran convince James that it’s not too late to reclaim his future?

This is a hard book to describe, hence the definite inclusion of the “about” section above.  It reads almost like a memoir in that we are truly living in the hearts and minds of the characters we touch and yet  as real as it all seems, it is still a work of Fiction.  Something to remember while living through the pages…

James had it all…he just didn’t know it.  Though this can be said of most of us from time to time for when the true value of something is staring us in the face as we are blinded by all the distractions surrounding said blessing, James’ shadows and demons are a tad more opaque than most.  His stem from the passing of a dear friend when he was but a youth in a rather traumatic fashion.  As he was there at the time, James blames himself for being unable to stop him…but there’s more to it than that, more than he’ll even admit to himself.  It’s amazing what the mind can protect us from whether we recognize the need for it or not.

In this case, he needs it initially but not to the extent that it’s carried.  You see, James is a feeler…someone who not only feels deeply himself (though he could use a lesson in expressing those feelings) but can help others feel their way through the roughest patches including their final journeys.  You might think it an enviable skill, but remember, though things may seem greener on the other side, that tall grass swaying in the breeze may be hiding an accident waiting to happen.  James uses his ability for good but also as a shield to avoid having to deal with his past.  Funny thing about the past, you can never REALLY escape it; it’s always there, lying in wait for its time…and its time it will have, make no mistake.

In James’ case, the time came from his every day life; his relationships, his ability to make personal connections and simply to let those he loves most in.  Don’t get me wrong, in the work realm, he was a success…but that’s not how you get the true measure of a man or woman.  He was a good man at heart but trying to know that person within, making it  past the walls was impossible…well, at least until Rebecca came into the picture.  Somehow she managed to connect with the man beneath the issues but only just; guess the heart knows what it wants even if the rest can’t seem to get in sync.  Anywho…Rebecca and her little girl make quite an impression both on James, those in the community, and readers.  These girls have been through a lot, and though Mom tries to make things look easy for the sake of her kiddo, times are tough…especially on the personal side of things, but that’s a story I’ll let you discover more of on your own.

In the end, if I was pressed to sum this one up in a word…it would be “journeys”.  It’s about the path you’re on, the one you’re aiming for and that golden brick one lying just out of reach over the horizon.  It’s a moving story taking you closer to that Omaha destination with every mile traversed, just not on the Amtrak-ish fast train…more of an old steam engine from yesteryear.  No matter…we all get there in our own time, or as Martin Diggs would say, whenever it’s our turn to ride.  Recommended for adult readers due to some content, themes, and a few “close encounters” between the sheets.

Review copy received courtesy of author Ann Whitely-Gillen.  (THANKS!)  For more information on this title as well as her future works in progress, be sure to stop by her official site.

Wonderful post. This is such a memorable book that you have reviewed beautifully.