READ ALL ABOUT IT: Malicious Mischief by Marianne Harden + CONTEST!

Hi guys!
Welcome back to Satisfaction for Insatiable Readers...the place that realizes there are SO many books and SO little time, but still tries to read them all...or at least share them.  ^_^

Today, we are playing host to a tour via Entangled Publishing spotlighting a title that is definitely worming it's way onto my wish list.  It from an author whose been around the world and back again, and stars a twenty-something who seems genuine even from the small exposure I've had to her.  Ready to read all about it?  Let's!  Today's book of choice and spotlight recipient is... 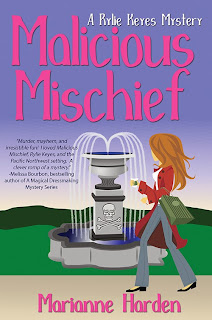 Is it strange to have the unemployment office on speed dial? Not for twenty-four-year-old college dropout Rylie Keyes. However, her current job at a small retirement home is worlds more important than all her past gigs. Fact is, if she loses this one, she'll fail to stop the forced sale of her grandfather's home, a modest lakeside bungalow that has been in the family for ages. But to keep her job she needs to figure out the truth behind the death of a senior citizen found murdered in her care.
The victim was thought to be a penniless man with a silly grudge against Rylie. However, his enemies will do whatever it takes to keep their part in his murder secret.
Forced to dust off the PI training she must keep hidden from her ex-detective grandfather, Rylie has to juggle the attentions of two very sexy, very different cops who both arouse and fluster her at the same time. And as she trudges through the case, she has no idea that along the way she just might win, or lose, a little piece of her heart.


I turned, my doubt about solving this case rising. I walked into Detective Talon.

I stumbled back, apologizing as he reached out, steadying me with a gentle hand.

“Thank you,” I said awkwardly, shocked by the comfort I found in his touch.

There came a lengthening silence as he stared down at me. His handsome face folded in, brooding, deep into a frown.

I looked at him in bewilderment. “Is something wrong?”

“It’s the way Lipschitz talks of you. It isn’t right and proper,” he said. “You do know he was once in love with you. And dammit, he quite possibly still is.”

Such concern, he must have written the Bintliff note. “There was never anything between us—why dammit?”

“A detective on a power trip, a vulnerable suspect, and an axe to grind—never ye mind, I suspect it’s better if I say no more,” he said, his voice steady but worried.

His assertion intrigued me on many levels. Though loosely exercised, it was a breach of the age-old police code of silence. Even when guilty of wrongdoing, cops don’t talk bad about other cops.

“I never encouraged Lipschitz,” I said. “He was too busy calling me bastard baby to realize that at the time. You should know something else. I had nothing to do with Otto’s death.”

“No mind, I already knew you weren’t involved,” he said. “Though it makes no sense to me, you trying to persuade your grandfather by solving Otto’s murder.”

I raised my brows, figuring he had learned this from Leland. “I need his blessing.”

“Answer me this: does the grape ask the yeast what type of wine it should be?”

Puzzled by this man, by how he talked in riddles, I stepped back, clumsily turning on an ankle. He didn’t steady me this time, didn’t touch me. It shamed me how much I had wanted him to. “I find you so confusing,” I said self-conscious, a bit shy.

“I cannae fault you for that. I’m up to my neck in confusion. There is no rhyme or reason in why I’m willing to break a dozen department rules to discuss this case with you.”

“Don’t risk your career for me,” I said too hastily, too coolly, as one does when skeptical, for police officers carried another burden, the binding pressure of their code of conduct.

He picked up on my doubt and gave me a half-amused smile. “My career will survive, though my ego may not be as blessed.”

I forced myself to say, “Ego complicates things.”

He continued to look at me with his dramatic eyes. I saw the soulfulness in them and thought back to his anger over Lipschitz’s contempt for me. I wondered why it bothered him, why he felt the need to write the anonymous Bintliff note. Surely, he had more to worry about than me. He was a man of contrasts; I could see that now. The dangerous detective with a discerning stare, concerned stranger abhorring the ways of a hateful partner. I smiled, oddly becoming more at ease with him. But there was something baffling, even staggering about the suddenness of this change. I was entering dangerous grounds, I knew I was, but still I said, “Maybe yours just got out of bed on the wrong side.”

“No,” I said, but it had been, and I turned cold all over at my boldness. I was acting harebrained. It had to stop. “Talon, why are you doing this? I’m more often the friend than lover.”

About the author...
Marianne Harden loves a good laugh. So much so, she cannot stop humor from spilling into her books. Over the years she has backpacked through the wilds of Australia, explored the exotics of Asia, soaked up the sun in the Caribbean, and delighted in the historic riches of Europe. Her goals in life are simple: do more good than harm and someday master the do-not-mess-with-me look. She divides her time between Switzerland and Washington State where she lives with her husband and two children.

Special thanks to Anjana at Entangled Publishing for the chance to participate in this promotion.  (THANKS!)  For more information about this title as  well as their full catalog, be sure to stop by their official site, follow the #entangledbooks hashtag on Twitter, or friend them on Facebook.  Speaking of the publisher....

In conjunction with this tour and as a THANK YOU for reading all about it and perhaps spreading the word, YOU now have a chance to win!  Enter below via the Rafflecopter widget and BAM, you score a chance to win a NOOK HD!  (Sorry international fans, this one is for US readers only per the publisher!)