Hi guys!
Welcome back to Satisfaction for Insatiable Readers...the place to be for a bookish break in your day because as we ALL know, it makes it that much sweeter.

Today, we usually partake of a teaser post...you know, where we share a line or two of our current reads to tease and entice other readers into the literary world we are partaking of.  It's fun, it's cool, it's gonna get skipped directly this week...but today's post sorta plays into that fun in a new way.  How so?  Keep reading my curious little bookish friends...

SO, when you think of the name EDGAR ALLEN POE, what comes to mind? 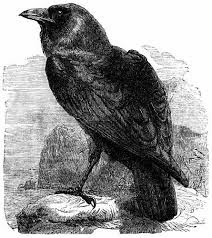 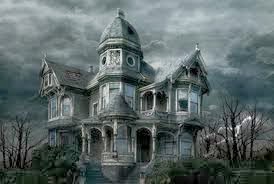 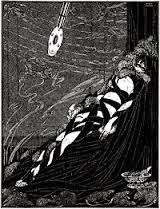 How about all of the above?
*nods*

Okay, so we have the symbolism his name invokes, but how about interest, enjoyment, and understanding?  Is the thought of reading Poe's work, enjoyable and enticing....or something akin to getting a root canal? 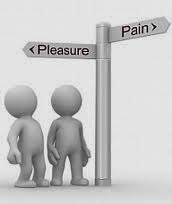 Whether your feelings fall to the former or most especially the latter, I just might have a solution for you.  It comes to us from an author that cut her teeth in the world of teaching, especially in the areas of English, composition, and Language Arts, so you know she's run across an assortment of students with varied understandings on the subjects covered...or in this case, authors.  She saw a problem...students struggling to understand the concepts behind Poe's classical works due to writing style and language....and formulated a solution, or rather a sort of study aid.  Which leads us to today's book of choice... 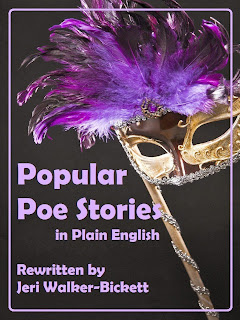 If the title doesn't explain it all right there, I'm not sure what will...but I will try to expand on it.

Here we have a collection of FIVE of Poe's most popular tales, cut down to size.  Now, that's not to say the stories were changed or the meanings lost, just the maze of words and ramblings that Poe was known for, cut through into bite sized, student-friendly pieces.  Did it work every time?  Well...allow me to indulge in a brief overview of each if you will....

The Cask of Amontillado - Having not read this story first hand and only a faint notion of the story line in advance, I do believe it gets to the heart of the matter, or rather the deep dark sunk in the earth core, but I can't say I'm extraordinarily fond of it.  It's basically a man taking revenge on another avenging the wrongs he was dealt by the same said individual.  The only problem...the dude was uber smashed when the evil deeds were carried out....smart for the planned events, certainly as they'd give less resistance, but less satisfying I would think.  Anywho...

The Masque of the Red Death - Though I've not read this one previously either, I have seen the story visually and while not quite as creepy or stirring, it works.  You get the feel for the extravagant lifestyle presented for the benefit of the "guests" (or is it prisoners?) to escape their impending doom, while coming to understand that no one can truly escape their fate no matter how many gold gilded walls you build.

The Oval Portrait - A new story to me, but definitely engrossing.  Perhaps the shortest of the retellings, and yet one that will give you pause....reminding you that art imitating life is nice, life imitating art in it's most stringent sense is not.

The Pit and the Pendulum - This is the only one for me that really seemed to stick to the original pattern for most the story; that is the wandering story line and ability to still lose the reader.  Though about halfway through it rectify's it's approach, I still wasn't as fond of this effort. 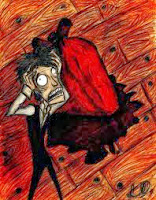 The Tell-Tale Heart - Aw yes, now this one is another of his tales that I've actually read and while yes, the original can be a tangled web of delusion to work through, it still obviously works...as does this rendition.  We still feel his connection to his "boss".  We still feel his hatred of the eye.  We still feel his guilt creep mightily up his spine until he simply can't ignore the beating of that long dead but not to be silenced heart. *thump thump...thump thump*  Good stuff indeed.

In conclusion, a great way to introduce young minds to the works of Poe as well as assist student readers in understanding the basics of the tales before diving in head first.  There's no harm in asking for assistance if something is too perplexing, that's what study guides and group discussions were made for!  Take advantage of the resources at your disposal and discover an author you may have written off of your own "to read" list, finding a home there once again.

Ebook for review courtesy of author Jeri Walker-Bickett.  (THANKS!)  For more information on this title as well as her growing body of works, be sure to stop by her site, like her on Facebook, pin her on Pinterest, or follow along on Twitter.  This ebook is available now so be on the lookout for it on an eshelf near you...or you know, click HERE.  ^_^

What a great idea, I know lots of people who are daunted by Poe's works, myself included.

Ooo, Poe. I've not read any Poe since high school. I should pull out a story here one day. :) Thank you.

This is very cool - now Poe is less intimidating! This approach could open up Poe to a whole new audience :)

Great way to make a classic author, as Poe, more accessible to all kind of audiences... I truly enjoyed the way you summarized his most well known brief stories:
Cheers, Aquileana :)