BOOK SPOTLIGHT: Turning on a Dime by Maggie Dana

Hi gang!
It's time for another adventure through the pages with yours truly on the site that doesn't know the meaning of "no" when a potential great read is involved....Satisfaction for Insatiable Readers. 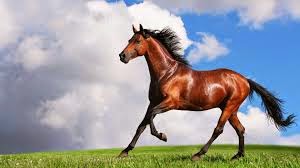 Today, we're spotlighting a NEW RELEASE in the Kid's Fiction, or more specifically Middle Grade (though the appeal is much wider), genre from an author we've met once before....or rather thrice.  That's right!  It's the return of Maggie Dana (Hi Maggie!), an author who definitely has a knack for creating stories that are relateable, characters who are memorable, and works well with animals....specifically horses.  Ringing a memory bell now?  Thought it might.

Yes, it's the writer behind the Timber Ridge Riders series (of which my reviews of the 1st, 2nd, and 3rd installments can be seen right here on the site) and this time, it's not a new addition to TRR but rather a new adventure we're embarking on.  This time around it pairs two horse loving girls through the curtain of time with big dreams and tense situations to overcome if they're both to reach their goals.  Sound good?  Read on my friend, read on.... 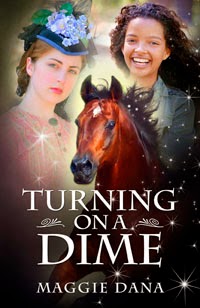 Turning on a Dime
by
Maggie Dana


Two girls from two different centuries and the horse that brings them together.
Teenage equestrian Samantha DeVries wants to be the first African American to ride in the Olympics. Her father, a successful trainer, pushes Sam to excel, while Sam’s academic mother tries to instill a sense of heritage in her headstrong daughter who’d rather be riding horses than studying history. But Sam’s beliefs and her carefully constructed world shatter like a jelly jar when she travels through a time portal and lands in the canopy bed of an 1860s Southern belle.
Even more surprised by Sam’s unexpected arrival is Caroline Chandler. She’s a tomboy who wears breeches beneath her crinoline and rides horses bareback, much to the dismay of her critical mother.
But neither girl has time to fret over petticoats and prejudice. The Civil War is raging, and soldiers from both sides are stealing horses. At risk is Pandora, Caroline’s beloved mare. Without her, Sam’s future Olympic horse, Nugget, won’t exist in the present.
Neither will Sam if the slave catchers grab her.

Not usually one for historically tinged novels?
Me neither...BUT...if my past experience with her work is any indication, it's got BIG potential.  As I said, this is an author who knows how to create a story easily accessable to readers of the targeted set as well as those beyond in years.  Whether equestrian expert or just horsing around (get it?  HORSE-ing around?  ^_^), you'll be welcomed into the fold with open arms and the additional danger aspect in this tale sounds like it adds that little bit of grit readers in the tween set are looking for without crossing that line into questionable territory.  Though not reviewing this title currently (due to previous obligations, but don't worry....it's coming!), I can honesty say I can't wait to learn more about Samantha and Caroline as they face uncertain times but also learn about themselves.  Sounds like my kind of read....how about you? 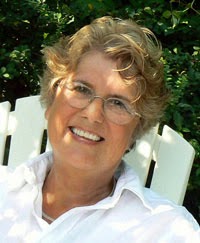 About the author....
MAGGIE DANA’s first riding lesson, at the age of five, was less than wonderful. In fact, she hated it so much, she didn’t try again for another three years. But all it took was the right instructor and the right horse and she was hooked for life.  Her new riding stable was slap bang in the middle of Pinewood Studios, home of England’s movie industry. So while learning to groom horses, clean tack, and muck stalls, Maggie also got to see the stars in action. Some even spoke to her.
Born and raised near London, Maggie now makes her home on the Connecticut shoreline where she divides her time between hanging out with the family's horses and writing her next book in the Timber Ridge Riders series.

Special thanks to author Maggie Dana for the head's up on this upcoming release.  (THANKS!)  Fore more information on this title as well as her other amazing works, be sure to check out her official site, or connect with her on Twitter.  This title is available now in print and ebook formats via Amazon,
Barnes & Noble, Kobo, and iTunes.

Sounds like a read that will appeal to all of those who loved Black Beauty as well of course those who just love horse stories in general.

Thanks for the Spotlight today. I'll be uploading the ebook version of TURNING ON A DIME in the next couple of days. Official launch is Friday, May 16th, but it should be available a little before then.

Hurray for another Maggie Dana book! Definitely a favorite author of mine.