For Fantasy Fans of all ages comes....Monster Goose Nursery Rhymes!

Hi there!
Welcome back to Satisfaction for Insatiable Readers, the place for readers from just beginning levels to well beyond their years....we've got a little something for everyone.

Speaking of everyone, today's chosen title fits that bill directly for although the intended audience falls to the younger set, I am convinced it will be seen in the hands of readers of all ages.  Wonder where I'm getting my bravado about the book?  Ah, well wonder no more!  Today's book of choice is ready to make a monstrous entrance and enchant the minds of those near and far.  Don't say I didn't want you..... 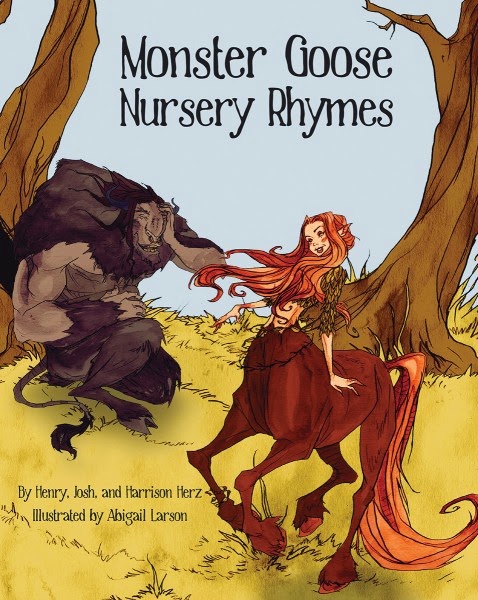 About the book....
Enter an enchanted land of mythical creatures where manticores reign and ogres roar—a land of mystery and fright. A unique twist on traditional rhymes of everyone’s youth, Monster Goose Nursery Rhymes presents a more sinister approach to these childhood classics, and yet the sing-song nature of the poems renders them playful and jovial at the same time. Little Witch Muffet is not frightened by a silly, little spider; she adds him to her stew!

Rotten zombies, giants, dwarves, and goblins mingle with werewolves, centaurs, and fauns. Follow along the skeleton stepping stones, scale up a palisade, claw at the window of a tasty child and bake him into a pumpkin shell. Monsters cook up delicious elvish pie, too! Every kid who has an eensy weensy bit of sense wants a pet with feathers white as snow, who flies like an eagle and bleats like a goat—a hippogriff, of course!

Six forest sprites with four times as many pixies escape from a loaf of bread atop the elaborate table of the fey queen; her feast has flown away! If you enjoy mischief and have a penchant for the morbidly hilarious, the Herzs’ rhymes will satisfy your mythological curiosities.

Now THIS is the nursery rhyme book Fantasy fans and players of role games have been WAITING for. (No, I'm not one of them, but I enjoyed it too!)

Each page is a full color spread of fantasy illustrations that could have come straight from a Tolkien movie or D&D card deck.  They're dark and creepy, earthy and base in their hungers (we're talking trolls eating elves, nothing more), all while playing with the rhymes we already know and love.  The end result?  Some come out just as sweet and some...a bit sinister.  Let's explore....

Take the first, 'Hefty Jack Horner'....needless to say, a play off of 'Little Jack Horner' and recited to the very same tune.  Let's just say, what he pulls out of his pie is NOT a plum, nor a very happy moment for those that helped MAKE it.  *gulp*  Then there's 'Eensy Weensy Brownie'...sang to the tune of 'Eensy Weensy Spider'.  I mean really, if his mischievous grin wasn't enough to give away his mission, the outcome of the rhyme surely does...and with flair!  Hey, it's not everyone that can match 'palisade' with 'dissuade' and make it work!  On the sinister side of things would be 'Manticore, Manticore'...read to the tune of 'Pussycat, Pussycat'.  Umm, well the pictures are scary enough by themselves but the ease at which he recounts his activities while in Persia leads me to believe someone else didn't enjoy the visit quite so much.

Though everyone will have a personal favorite either by verse or design, one of my own has to be 'Mary Had a Hippogriff'...for me it combined one of my favorite nursery rhymes and a Harry Potter creature I adored (okay, well it's not just from that story, but Buckbeak was memorable!).  Of course, it was an additional smile inducing element to see the school girls running away at the site of these two....honestly, you'd sweat they'd never seen one!  *wink*

All in all, there is much fun to be had within these pages and I do believe it will find a home on shelves with little ones as well as those Fantasy fans that simply couldn't help themselves.  Really though, who could blame them?  A fine read for anyone that appreciates somewhat timeless verse,  illustrations that are anything but mere flights of fancy, and an education via Bestiary inclusion....right at the end of the book, perfect!

Electronic ARC for review courtesy of Bergen at Pelican Publishing Company, Inc.  (THANKS!)  For more information on this title as well as their current catalog, be sure to stop by their official site, catch them on Twitter, or like them on Facebook.  This title is set to release late January or early February 2015, so be on the lookout for it on a bookstore shelf or virtual retailer of your choosing VERY SOON!  (Or you can always pre-order it...)

Such an eclectic range of characters, I love the sound of the hippogriff.

Monster Goose sounds much more to my taste than Mother Goose ever did, so thanks for the heads up! What a fun sounding read!

Terri @ Alexia's Books and Such...