Straight from the horses mouth....Audrey (Cow) by Dan Bar-el

Today, we stepping off the agreed to review path and featuring a title I won a short while ago on one of my favorite bookish social sites, LibraryThing.  If you've never checked them out, I'd highly suggest you do.  Anywho, I was perusing the newly listed titles available to win and stumbled upon a Children's Fiction selection that sounded curious indeed.  One entry later, and the rest is history as it became one of the fun arrivals in my mailbox.  Today is the day it reaches the blog limelight as I get to share it with all of you.  Get ready for a curious read that's going to get the story straighter than straight because each and every aspect comes right from the horse's, I mean cow's, I mean dog's, I mean...a variety of animal's mouths.  ^_^  Ladies and gents, today's book of choice is.... 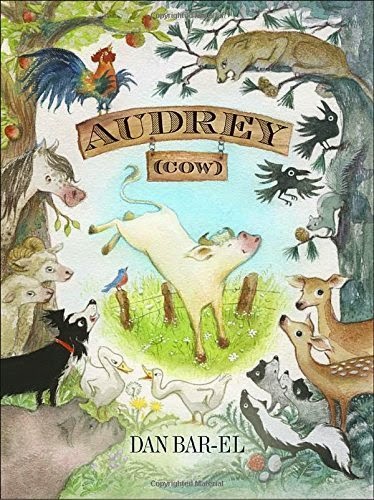 About the book...
Audrey is a cow with poetry in her blood, who yearns for the greener pastures beyond Bittersweet Farms. But when Roy the horse tells this bovine dreamer that she is headed for Abbot's War, the slaughter house, Audrey knows that she must leave her home and friends sooner than she ever imagined. With the help of a whole crew of animals and humans alike, Audrey attempts to escape the farm she lives on--and certain death. Cleverly written as an oral account, this unique illustrated tale of an animal on the run, told "to camera", uses over thirty narrative voices, including six humans, four cows, three sheep, two sheep dogs, one pig and a very silly rooster.

First surprise....this is actually based (somewhat) on a TRUE story!  I had NO IDEA until the final pages when the author shares this tidbit with readers and we get to read what happened to the real life "Audrey".  Pretty cool stuff, if I do say so myself.  Now, back to the story...

Every bit of it is as true (in a fictitious sense) as can be.  Scouts honor.  How do I know?  Because...because the author shares this heroic and dashing tale of life, love, and friendship through the eyes of those that lived it...the animals.  Yep.  Each animal that was involved in helping Audrey escape her fate gets to be heard, from her friend Eddie the dog to Buster the pig, Roy the horse to June the deer...even a few humans.  (Whoa...)  What starts as the story of a cow on her way from a wee little one to prime market value, takes shape into a tale you won't soon forget.  You have board balancing cows, truck stopping dogs, gate opening pigs, chaos creating sheep and so many other things that break loose, or set their fancy free that if not for the driven direction of the story, one could easily lose their way.  Worry not though my fair readers, no one will be lost that is not intending to be and by book's end, all is sorted into perhaps not their natural order but the one they chose for themselves that's better fitting, leaving us with the distinct impression that all things are possible and to never stop reaching for your dreams.

My favorite?  Hmm, that's a hard one.  I could easily say Audrey for her plucky nature and never-say-die attitude.  I could definitely pick Eddie because really, he's a pup that knows right from wrong and stands by his friend despite what his pop thinks.  Wanna know who I really pick though?  Boris...the skunk.  Yep, the lonely little skunk.  He tries SO HARD to help Audrey escape the clutches of those trying to track her down and pretty much by his lonesome brings their search to a screeching halt time and time again.  He made me laugh, he made me smile, and he even warmed my heart (you'll see when you read it).

In the end, it was a SURPRISING read not only for it's real life tethers but for how things played out.  I started out as a skeptic thinking there was no way I would be able to read an entire book broken up into different voices so frequently that it almost read like an interview (which it sort of is...now that I think about it), and wound up really enjoying myself by book's end.  It's a touching tale that covers a variety of topics, making them all kid friendly and easier to discuss with adults if further questions are raised. Recommended for Children's Fiction readers of all ages and animal lovers too.

Special thanks to Tundra Books for the review copy won via LibraryThing Early Reviewers.  (THANKS!) For more information on this title as well as their full catalog, be sure to stop by their official site.  This title is available now, so be on the lookout for it on a bookstore shelf or virtual retailer of your choosing.