I don't know about you, but we had some killer storms last night in my area, and by last night I mean the wee hours of the morning when no one should be up except by choice. Wind, rain, and I'm pretty sure some hail (which is what woke me up because we have a sunlight in the kitchen...imagine THAT "alarm clock"), came down upon us but in the end the only one worse for wear is my poor little Scout.  He abhors storms of any sort but we gave him his special toy and a good cuddle to help ease his stress.  Now, the pups are all tucked in and I'm...off to work.  Bummer...but someone has to do it.  I couldn't leave you a second day without a post though.  ^-^

Today's spotlight falls on a Tween title that will have you reliving your childhood days of journal writing, phone call making, constant texting, and eagerly falling the every move of your favorite stars (hey, wait a second...do any of us actually grow up because some of that sounds pretty darn familiar still...).  It's the first in a planned series (though how many in total, I can't be quoted on) via Red Sky Presents and...well, let's just let Emma do the talking, shall we?  Grab your cutest outfit, BFFs, and get ready to SCREAM out your joy (or bring earplugs...up to you), because here comes today's rockstar spotlight title...

About the book...
Emma G. is CRAZY about Aaron, lead singer of Boyz3000. Of course, she doesn’t actually know him, but so what? Feelings are feelings. That is until Josh appears… and he’s soooooo CUTE. Navigating her two crushes and her middle school life, especially with eight-grade hater Renee around, is a challenge. And oh yeah, she’s got to earn money for an AWESOME trip to the Bahamas to see the band of her dreams. Hello???? How much can one thirteen-year-old take???

This reads very much like the tween journal that it is written to be.  It has all the fangirling, all the squealing, all the excitement you'd expect when you world revolves around the acts and reactions of your one true favorite band...with the dreamy member you just KNOW you'd connect with in person.  It's definitely true to the characters...and for me, that both worked for and against it. I mean I had my favorite bands when I was little (and now), my favorite authors when I was little (and now), and my favorite "insert whatever your favorite thing is here", but I never really fell onto the whole squealing fan girl wagon...at least on the outside. Inside, I'm pretty sure I was melting with sure joy, but outside, calm and fairly collected.  The joke was always that I was born an adult and just grew taller. I suppose in most respects that could be true but that doesn't mean I didn't find my own enjoyment in the story.

Emma's relationship with her siblings was endearing, her friendships were real, her determination to get to the Boyz3000 concert very much in line with her personality, and the effort she put forth to get there admirable...especially when the dog walking turned into dog washing. Let's just say that was quite an adventure. *giggle* She hit hard times, roadblock after roadblock, but whenever she was ready to truly throw in the towel, her love of music (and Boyz3000) pulled her through...as well as the helping hands of friends and family.  It's nice to see a story with those aspects represented in a GOOD light, instead of everyone at each other's throat.

I will admit about halfway through I had almost reached my point of tween language limits (call it the adult in me again) but I'm glad I continued because once I reached the end or shall I say the lack-of-ending-with-a-total-cliffhanger-surprise, I knew I would have to put myself on the list for the second installment. Hey, I've got to know what happens for Emmie, her BFFs (which I applaud the inclusion of a guy in that category!), "the new guy" (just to tease you), and something else bigger than them all that affects her future ... which I can't tell you about so you'll either have to live with the curiosity or satisfy it with a read.

Recommended read for the tween set as well as those masquerading as teens through adults in their daily lives.  ^-^

Taro Meyer is a Grammy, Parents’ Choice and Audie Award winning Audio Producer who has been producing and directing YA audiobooks for over 20 years, including The Princess Diaries Series, the All American Girl Series, The Inheritance Cycle (Eragon, Eldest, Brisngr) and Judy Blume’s The Pain and the Great One, Here’s to You Rachel Robinson and Tiger Eyes among others. She lives in New York City and Malibu California. 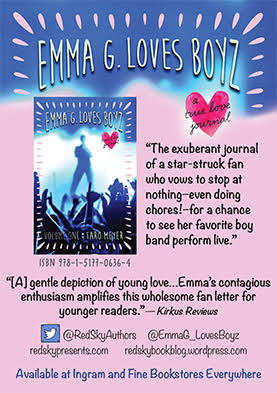 Special thanks to Brittany at Red Sky Presents for the copy for review.  (THANKS!)  For more information on this title, the author, the series, or the publisher, feel free to click through the links provided above.  This title is available now, so be on the lookout for it on a bookstore shelf or virtual retailer of your choosing.