When You Give An Imp a Penny by Henry, Josh, and Harrison Herz - Review + Interview!

Hi there!
Welcome back to another exciting week here at Satisfaction for Insatiable readers, where the bookish are welcome with open shelves....hahaha!  Like we REALLY have space on our shelves... ^-^ 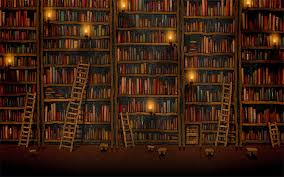 Today, we're shining the spotlight on a title that I had the pleasure of reading once upon a time, but am only reviewing for you today.  Why?  Cuz...no really, because publication day arrived last month and now that it's out, what better time to add it to your wish/but list?  Exactly!  Now, on with the show...

The title at the center of today's post comes to us from a publisher we've read before and an author we've featured.  Nothing like familiar faces to bring a smile to your day, am I right?  Of course I am (^-^), especially when that smile is delivered through the pages of a charming Picture Book complete with fantasy style illustrations to delight those that are kids at heart OR introduce those to the art form who are currently kiddo age.  Alas O'Rourke, I'm waxing rather long on this intro and so in the spirit of keeping my review shorter than the book (maybe), allow me to introduce today's book of choice... 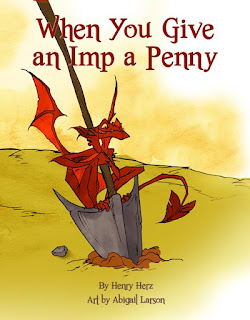 When You Give An Imp a Penny
by
Henry, Josh, and Harrison Herz
Illustrated by
Abigail Larson
9781455621446
Pelican Publishing

It all starts with a penny and ends with a...penny.  Wait, what?  That seems a bit simple and yet it makes for a fun romp through the pages.

It seems our imp is nothing if not practical and while his train of thought seems sound...coin bag for the penny, shovel to bury it, pebble to mark it...it all eventually leads to mischievous little acts that seem to follow him...sweep up the dirt, the broom catches fire, replace the broom, irritate the cat.  Basically, we can boil down our experiences to a quick guide.  Brownies like to tidy while imps prefer mischief, so don't get suckered in if one comes callin'!  If you keep your cool, you'll be rewarded handsomely...and gain a friend for life.  Umm...about that last bit.  Be brave, be bold...have a tight hold on your purse strings, thank him kindly, but send him on his way.  Your house and cat will thank you.

All in all, another grand adventure through the pages of a Picture Book with something MORE.  Speaking of that something "more", the illustrations that give it that BOOST must be remarked upon.  They are certainly as charming and devious as the story, allowing the fairy tale aspect to be seen but also the sneaky nature of our friend and his new victim...I mean, human acquaintance.  A great balance is achieved between sight and word, giving readers something to entice the mind and eye equally.  Certainly a book I can see pulled out for story time both at home and school, or just as easily used as a mythical creature point of reference.  Whatever your interest, I'd say remember all you've learned here and go forth to snag a copy to call your own!

Now, sometimes a review is simply not enough and more words need to be spoken...err, typed.  To continue the thread of interest and dive a little deeper, I had the pleasure of interviewing the author behind the work, and here's what he had to say...

1)  Why this genre?  What about Picture Books called to you as a writer?
The first book I fell in love with, even more than the Dr. Seuss classics, was Sendak's WHERE THE WILD THINGS ARE. Who wouldn't want to (spoiler alert) travel to a distant land, lead a wild rumpus, be crowned king of the monsters, sail in and out of days, and return home for dinner (still warm)? I was hooked on fantasy in elementary school. To this day, fantasy and science fiction are my favorite genres.
I am drawn to picture books in particular by their heavily illustrated format. If I'm going to take my readers to another universe, setting, and/or time, the illustrations make the experience so much more immersive. It's said that brevity is the soul of wit, and I enjoy the challenge of creating a compelling story arc, developing interesting characters, and conveying a theme, all in 500 words or less. A practical benefit is that it's much easier to get friends to critique your work when it is a picture book and not a 100,000 word novel.

2)  As this IS a picture book, we'd be remiss if we didn't talk about the illustrations.  How did you connect with the illustrator and how did their imagery fit with what you had in mind?
There is a rule of thumb in traditional publishing that says an author who is not an illustrator should not submit artwork with his or her manuscript. I broke that rule with my first traditionally published book, MONSTER GOOSE NURSERY RHYMES. That was because I wanted to have artwork to self-publish it, as a backup plan. So, I scoured DeviantArt.com for illustrators whose style I thought was appropriate, and who were willing to work on spec. Happily for me, I discovered the talented Abigail Larson. Once we sold MONSTER GOOSE to Pelican, I asked her to collaborate with me again, and this led to WHEN YOU GIVE AN IMP A PENNY.
Abigail's illustrations have a darker, more mature feel that your typical picture book artwork. But, I felt that, aside from being beautiful artistically, her illustrations helped convey the medieval fantasy feeling I wanted for my books.

3)  Did you always see yourself as a writer or were there other paths you considered pursuing?
I'm a management consultant helping companies make their processes more efficient. I've only written professionally for about the last five years. My journey, like Bilbo Baggins's, was an accidental one, but one I'm glad I've taken.
A few years ago, I wanted to share my love of fantasy with my young sons.  They were too little for watching most of the fantasy and sci-fi movie classics, and there are only so many good fantasy books available for that age range.  Struck by inspiration one day, I came up with a way to share the joy of entering the magical realms of fantasy. I would write a fantasy book for them.
What I did not anticipate was that my boys would give me feedback on the story.  They devised some of the character (Nimpentoad) and creature (Neebel) names, and made plot line suggestions.  And who better to help make the story appealing to kids than other kids?  So, the goal of interesting my sons in fantasy transformed into also encouraging them to write.
Originally, I only shared the story of NIMPENTOAD with family, for their own enjoyment.  My sister-in-law suggested that I consider publication because she felt the story was much better than many of the books she was seeing for her similarly-aged kids.  We decided to give it a try, and that launched my writing career.

4)  My first encounter with your work was MONSTER GOOSE NURSERY RHYMES, a rather enjoyable read I might add.  This time around, we're dealing with Imps.  What's the fascination with monsters and creatures from tales of old?
Thanks. I've asked myself the same question, and have a theory for why I (and kids in general) like stories about monsters. I believe it's the same reason kids are drawn to dinosaurs, superheroes, and giant robots. Subconsciously, kids recognize that they are smaller, less independent, and (in some ways) less capable than adults. So, it's great fun to imagine oneself having (or being friends with a creature that has) extraordinary abilities, or even an unusual appearance.

5)  If you could go back in time and be the creative genius behind any work, what would it be and why?
Thanks to my extensive reading in the science fiction genre, I'm not falling for your travel-back-in-time trap! If I change something, I cannot predict the ripple effects. And who am I to go back and try to horn in on, say, Sendak as he created his masterpiece? Would it be better? I think  not.
However, if I give in to the Dark Side, I would have loved to be involved in the creation of The Lord of the Rings movies. I would have been the angel on Peter Jackson's shoulder telling him not to deviate so much from Tolkien's canon.

6)  If you could choose ONE message readers would walk away with after reading your work, what would it be?
The theme of WHEN YOU GIVE AN IMP A PENNY is: it's the thought that counts. The imp is really trying to be helpful, even if the results are quite the opposite. I'm a big fan of irony.
Before you lend an imp a penny, there’s something you should know—such a simple act of generosity could set off a side-splitting chain of events! WHEN YOU GIVE AN IMP A PENNY shows us just what happens when an accident-prone—but well-intentioned—imp comes along asking for favors! From tracking mud on the floor to setting the broom on fire, this clumsy little imp causes accidents wherever he goes, but he’s determined make things right again. The only thing it will cost his host is a little patience—and maybe a bit of time cleaning up some messes! It won’t be long before this troublemaker has won over the entire family (except for the cat) with his irrepressible charm. 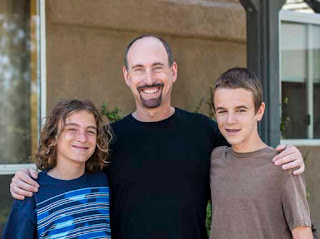 Special thanks to the author team and Pelican Publishing for the interview and digital copy for review. (THANKS!)  For more information on this title, the authors, the publisher, or future releases, feel free to click through the links provided above.  This title is available now via Pelican Publishing, so be on the lookout for it on a bookstore shelf or virtual retailer of your choosing.

Definitely a book worth spending, ahem, a 'penny' or two on, this sounds like a story I'd really enjoy and not just because I'm a sucker for a cute dragon.

A dragon? Where did I get a dragon from? I of course meant to say for a cute IMP.