Today, we're taking another look at a Children's Chapter Book series I've come to love as the third title makes its way through the blogosphere via Kit Lit Reviews and Snarl's Book Blog Tours.  Hey, wait a minute...Snarls?  How did HE get to be in charge of the tour?!  Oh wait, he is a dragon.  It stars the fun and spunky Princess Petra and her wonderful mix of friends, setting forth on adventures worthy of the first princessy knight to protect their fair kingdom.  This time around, there's a MISSION of utmost importance and she's determined not to let anyone down along the way.  Ready, set, read all about it! 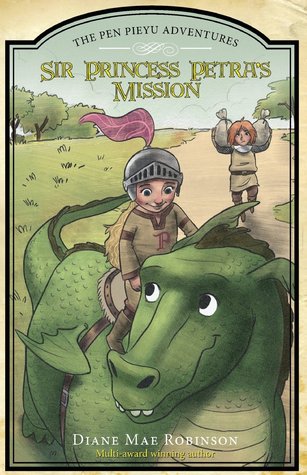 About the book...
Sir Princess Petra has already attained her knighthood in the Kingdom of Pen Pieyu and her non-princess-like talent certificate from Talent School, neither of which pleases her father and mother, the king and queen. The king writes up more silly rules in the royal rule book to deter Sir Princess Petra from her knightly ways and useless talent, and turn her into a real princess once and for all. Will the king finally succeed with this newly written, ridiculous mission for Petra?

When I caught wind of this tour, I couldn't say no despite the fact that I had actually reviewed this particular installment a few months back (click HERE for a quick read through).  No, I simply knew I had to find a way back into the world of Pen Pieyu...and I did.  I got the chance to chat with the Sir Princess herself!  That's right.  I scored an interview with the ever busy Petra and she was kind enough to share a bit about her self and a look behind the scenes on her adventures.  So, if you think you're ready, let's go on an adventure and welcome Sir Princess Petra! 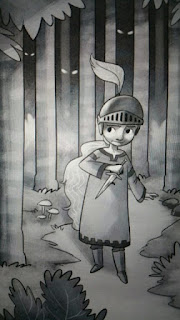 What do you really think of all the rules your Father the King has in that rule book of his?
Hehehehe. Father does try so hard to make rules that will somehow make me behave like a princess, but it’s never going to work. Besides, Father doesn’t study his grammar and his rules are all muddled up. Anyway, I decided a long time ago that I am a knight and that’s that. I sometimes get annoyed when he makes a new rule and I roll my eyes at him. He doesn’t like that. Gosh, can he ever bellow when he wants to.

Which of those (rules) you've encountered do you consider the most preposterous?
Father’s rule that I attend Talent School to make me more princessy was absolutely incredibly ridiculous and the most hairball corny idea I have ever heard of. Me, crochet? Or Get Over Fainting Fast School? Or Jewelry Budget School? Sheesh! My parents are so old-fashioned!

You've a way with words, as proven by your uncovered talent, and a good dose of wit. Tell me...given the chance, is there any other talent you'd wish to wield?
I really want to study magic. Several new moons ago, Pen Pieyu Castle had an elderly elf mage summoned to the castle to entertain for Mother’s birthday. He only wears cloth armour because he has invisible shields of protection—I want that. He turned water into wine, which Mother liked a lot, then the mage struck his claw-and-orb-topped staff on the floor three times and made father vanish into a cloud of sparkle dust. Father re-appeared shortly thereafter with a scowl on his face. Father then told me he noticed a gleam in my right eye; that made him squish his eyebrows together in that funny way that he does just before he talks louder than necessary, so he bellows out, “Nay, Princess! Rein in your horses!” I know, it doesn’t really make sense since there were no horses in the court. Anyway, Sir Tan Lee, that’s the mage’s name, said I could venture with him one day soon. I told my writer girl. 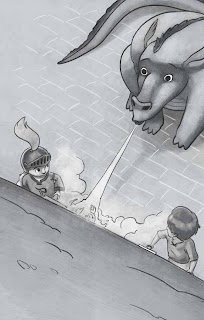 In your first adventure, you encounter Snarls...who is pretty intimidating. After all, he IS Dragon. Be honest...were you just a teensy but scared? How do you find the courage to persevere?
Before I answer, I first need to know if you are going to put this interview all over that internal net thingy, like Sue Morris does on her bog site. She interviewed us characters before and then blabbed our answers to all four corners of the world on that internal net. Oh, just a moment . . . Hmmmm, Snarls is poking me and saying it is a good kind of blabber because that’s how we will get more subjects to read about us. Snarls has a crush on Sue, you know. Heheheh. Ouch! . . . Okay, okay, I’ll answer then. Sheesh! When I first encountered Snarls, No, I was not scared. That stuff in the book about my knees shaking, pure hogwash by my writer girl and her drama, drama, constant drama.
Snarls says we’re off the internal net now, so I’ll tell you what really happened when I first saw him—I nearly let loose my bladder. I turned to run away, like all the other soldiers, but when I thought of a forever horrid life of itchy girly dresses smothering me, bodice girdles that break my ribs, the constant chatter of crochet, and the lady’s maid who pulls and stretches my hair into ringlets with a hot iron, then fetches the jewelry that causes body injury with pokes and stabs, well, you get the scene, I found my courage. Princess stuff is just scary!

Did you ever think you'd have readers following the tales of your adventures or inspire other young minds to seek their own path?
A long time ago, when my writer girl first discovered me etched in the bark of a tree and created me, that is exactly what she told me her mission was—to inspire young subjects. I liked the idea and agreed to be her character. Then we went looking for more tree bark etchings to answer the summons of more worthy characters. All of us characters think that inspiring young subjects to walk their own path in life by being brave, honorable, kind, and believing in themselves is the noblest cause, even if our writer girl is a little dramatic about it all.

Time to get to know you a little better... 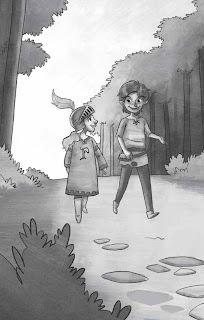 Favorite color? Pink
Favorite food? Chocolate, mushrooms, olives, nuts, wild berries.
Favorite place in Pen Pieyu? Hobble-Wobble Creek, where my friend, Letgo, the crocodile lives. We have the best wrestling matches.
Favorite place OUTSIDE the kingdom? The Vast Wilderness. That’s where the lost donkeys, from The Land of Lost Donkeys, hide out, and where the ganutes live—they are all a swell bunch. I’m teaching the ganutes to read and write so they can interpret the royal rule book. They want to become knights.
Best memory so far... The day I met Sir Norton Nastybun, from the Kingdom of Mesoggie, and he wanted to duel me but I tricked him into dancing with me instead. I danced him until he was dizzy and that’s when he started talking and when we figured out the misunderstanding about the dueling part—sometimes things are just not as they seem and need to be talked about. Henceforth, we have become the best of friends.
Fondest wish for your future... That young subjects think us worthy as characters and want to read about our next adventures. And that our writer girl still wants to write about us, even though we sass her sometimes. Oh, did I ever tell you how she deals with our sass? She takes us out into the forest and shows us tree bark—scares the billywilligers out of us.

Thank you so much Sir Princess Petra for taking a moment out of your adventuring to answer my pesky inquires!  I'm telling you, you've been a joy to have and your answers were just what I'd expect from a lady of your character.
^-^

Diane Mae Robinson started her love of reading and writing when her Grandma Robinson gave her the book Black Beauty for her seventh birthday. Diane lives in a small hilltop castle in central Alberta, Canada amongst an old and magical forest inhabited by gnomes, fairies, a princess, and a dragon. This magical forest is where Diane creates her characters and gets the inspiration for her stories.

The author has a journalism diploma from the Schools of Montreal, and an advanced diploma from the Institute of Children's Literature in Connecticut. Diane is also an artist, art teacher, writing instructor at the Creative Writing Institute, and a children’s book editor. 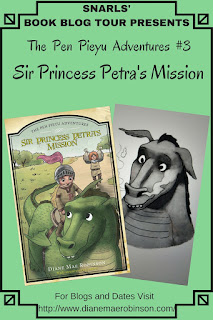 Special thanks to Sue at Kid Lit Reviews, author Diane Mae Robinson, and Princess Petra herself for the chance to participate in this tour today and their wonderful insights into the Kingdom of Pen Pieyu.  (THANKS!)  For more information on this title, the series, the author, THIS TOUR, or those promotions on the horizon, feel free to click through the links provided above.  This title is available now, so be on the lookout for it on a bookstore shelf or virtual retailer of your choosing.

This sounds SO fun!! Thanks for sharing! :)

All About Children's Books said...

I can't believe that scallywag Petra gave you an interview. Gads, she hasn't been talking to me for months now, ever since I've been working on writing my next book--The Dragon Grammar Book coming out in 2016. Thanks so much for participating in the blog tour and for reviewing my book. The Pen Pieyu gang and I really appreciate it. :)

Gina, Thanks for taking part in Diane's . . . oops! Snarls' Book Tour. I'm positive he appreciates all your work and enthusiasm.

Your interview with Sir Princess Petra is wonderful. I can't believe you had her spilling so many royal beans. I've known Petra for three years now and she hasn't said so much as maybe 2oo words to me, and none of those were juicy Kingdom Pen Pieyu insider knowledge.

Oh, I hope the King and Queen don't use the Internet. It could cause His Royal Highness to furl his brows and write a new goofy rule in his Royal Rule Book. And the Queen . . .she'll simply "faint." (I think she's a tad passive-aggressive, though in a royal kind of way, of course.

Gina, you DID buy the "Royal (Civil) Suit Insurance for Interviewers and Other Knumbskulls," right? (It's offered at the bottom of your contract with the Kingdom you signed before the interview. You do need the Royal Magic Magnifier to read it. Snarls was supposed to loan it to you when he had you sign the contract.) Oh, well. I'm sure the King will accept 21st Century insurance.

Fantastic Interview (the entire post)! You should try interviewing Snarls next time. :)