Keep your eye on the sky and a hold of your heart...BLUE VISION by Marie Lavender

Today, we're jumping between the pages of a book in a genre I've not previously explored...from a galaxy far away.  (Sorry, I couldn't resist!  ^-^)  It's the first book in a Paranormal Romance series and before you go rolling your eyes too hard, let me tell you...it was QUITE GOOD!  There is one little caution I would give though, but we'll get to that in a second.  Ready or not, here comes today's ebook of choice... 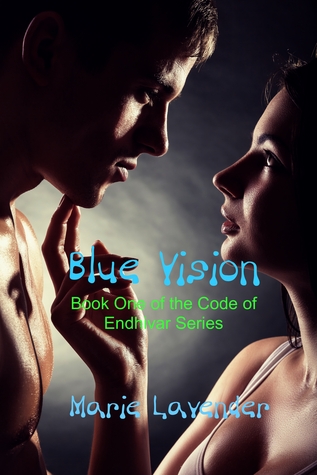 About the book...
Brooke Sanders just wants to get away from her life for awhile. A remote cabin in Montana fits the bill. She doesn’t expect to encounter a mysterious stranger with unusual blue eyes, or events that cannot be explained…

Colin Fielding is on a mission – scout a planet and return home to Endhivar. Simple really. What he doesn’t anticipate is that fate has a pretty twisted sense of humor. Suddenly, this human calls to him, every part of him, like the call of a true mate, and he can’t deny the connection as he gets closer to her.

Little do they know, someone is out to do them harm, as well as the world Brooke holds so dear. Can they stop what’s coming before it’s too late? Or will the universe lose a perfect gem?

So about that warning...
...though YA fans may be tempted to dive into this one as the cover is appealing without overtly romantic undertones (despite the intense eye gazing...*sigh*), and the synopsis is certainly attention grabbing, take heed...it's in the Paranormal Romance genre for a reason.  I'm saying target audience is at earliest New Adult to Adult as there are some pretty "memorable" moments...is it getting warm in here?  Now that that's said, let's get to the story!

Like I said, this is along the lines of a first for me as I'm not really into the whole alien bit, but Colin (as we come to know him and I shall call him because his Endhivarian name is beyond me to repeat) is a truly likable guy...err, alien.  He has enough humanity built into his character that apart from the extra organs, blue tinged skin, and powers of persuasion (and then some), you'd never even know he was from another world.  In fact, you might think he is a grand example of our species...wish the same could be said about the rest of his race.  As it seems, Colin is not the first of his kind to make the trip to our stratosphere (he's a scout...take that as you will), and he may not be the last. *dun dun dunnnn*  Speaking of which, what about our girl Brooke?  She's definitely a tough cookie despite all the darkness that has affected her over her short-ish lifetime.  I applaud her coming out the other side of those hard times with a protective shell intact but not making it so tough that nothing could ever break through.  As it seems, all she needed was the heart of a good man...and boy, she gets it in more ways than one.

To conclude, this read has all the feels (and then some) that you could imagine with a story to back it up.  The author utilizes her writing experience and spins a tale with appeal for sci-fi fans and newbies alike.  She gives us the big "what if" as well as the potential for a happily-ever-after, while still having us keep a wary eye on the horizon.  Will things end in a bigger explosion than Colin and Brooke make between the sheets?  Or will she be his undoing to the point that the side he called "right" no longer feels like home?  Good question, but I'm not about to spoil it for you.... *wink*  Say farewell to 2016 with an out of this world story you won't soon forget...

Marie Lavender lives in the Midwest with her family and three cats. She has been writing for over twenty years. She has more works in progress than she can count on two hands. Since 2010, Marie has published 23 books in the genres of historical romance, contemporary romance, romantic suspense, paranormal romance, science fiction fantasy, mystery/thriller, literary fiction and poetry. She has also contributed to several anthologies. Her current published series are The Heiresses in Love Series, The Magick Series, The Code of Endhivar Series and The Blood at First Sight Series, but she has many other series in mind.

Special thanks to author Marie Lavender for the ebook for review.  (THANKS!)  For more information on this title, the series, the author, or the publisher, feel free to click through the links provided above.  This title is available now via Solstice Universe, a division of Solstice Publishing, so pick up your copy today wherever ebooks are sold.