BLOG TOUR: A Greyhound, A Groundhog by Emily Jenkins

Today, we're joining Random House Children's Books in celebration of a Picture Book title about to celebrate its book birthday.  It's releasing under their Schwartz & Wade imprint and from my own experience between the pages, I can see little ones getting a kick out of it....and adults being plied with "just one more time, please" over and over again.  Why?  Oh, you'll see.  Ready or not, here comes today's blog tour guest and book of choice... 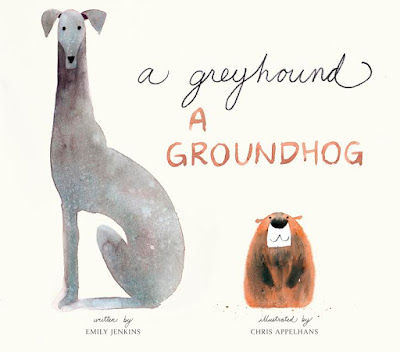 A Greyhound, A Groundhog
by
Emily Jenkins
Illustrated by
Chris Appelhans
9780553498059
Schwartz & Wade

From the moment my eyes read the title to the second I saw the cover, I knew I had to see what magic was in store for me in this read...after all, how often do a get such a cute set of animal friends on the cover, with their opposite ends on the back!  ^-^

The watercolor (at least to my eyes) treatment of the images works perfectly to create texture within our "dogs" without having to resort to extreme detail work, making it easier for wee ones to simply have fun with it all.  Surprisingly though, the book is at first more rhyme than picture, as the sparse illustrations allow the word play to be front and center.  As the tongue twisty ride progresses though, we are treated to a visual array of wonders equally as beautiful as the simple tale being portrayed...the interactions and friendship between a greyhound and a groundhog.

I dare you to try to make it through this tale without tripping over your tongue at least once.  It practically begs to be read allowed and I've no doubt (as mentioned in my intro) that readers will have the request from the listeners, over and over again.  The trick...getting the listeners to join in!  Really don't think that'll be a problem though with this adorable duo.

Emily Jenkins has written many highly acclaimed books for children, including the picture book Toys Meet Snow, a New York Times Notable Children’s Book and a Wall Street Journal Best Children’s Book of the Year, and the popular award-winning chapter books that feature the same beloved characters, Toys Go Out, Toy Dance Party, and Toys Come Home. She is also the author of A Fine Dessert, a New York Times Best Illustrated Book of the Year; Water in the Park, a Booklist Editors’ Choice and a Bulletin Blue Ribbon Book; and Lemonade in Winter, a Publishers Weekly Best Book of the Year. You can follow Emily on Twitter at @elockhart.

Chris Appelhans was selected as the Children’s Choice Illustrator of the Year at the Children’s Choice Book Awards for Sparky!, written by Jenny Offill. The book received two starred reviews, including one from Booklist declaring, “Appelhans is a revelation.” Chris has also worked on several films, as an illustrator and a production designer for Coraline, an environment designer for Fantastic Mr. Fox, and a visual development artist for The Princess and the Frog. You can follow Chris on Twitter at @dairysnake.

Special thanks to Kathy at Random House Children's Books for the copy for review as well as the chance to bring this tour to you.  (THANKS!)  For more information on this title, the author, illustrator, or publisher, feel free to click through the links provided above.  This title is set to hit store and virtual shelves January 3, 2017, so mark your calendar or preorder a copy today!

Loving the cover. Sounds fun whether you get others to join in or not.