HI there!
Season's greetings from Satisfaction for Insatiable Readers.

Can you believe how fast December is going by?  I mean, it's the ELEVENTH already.  There's only 19 days til Christmas!  *-*  I just finished the decorations (outside) the other day, barely have my shopping done, and still have to wrap everything, with a full work and reading schedule.  It's enough to make anyone say Bah, Humbug!  But I digress...letting the stress of this spirited time of year get under your skin can be an easy task, but if we keep our eye on the prize and remember what the season is really all about, it turns from hardship to joy in the time it takes for the sleigh bells to ring.

Today, we're shining the light on a recent release via Gallery Books courtesy of my friends and yours, Tandem Literary.  It's a holiday title that is not to be missed.  Why?  Well, for oh-so-many reasons, but to illuminate them twice, may make my review longer than the work, and I know you want to read the review because of what comes after it... ^-^ ... so, let's cut to the chase, shall we?  Today's holiday title in the red and green spotlight is...

About the book...
A wounded warrior and his younger brother discover the true meaning of Christmas in this timeless story of family bonds.

As far as ten-year-old Miller McClellan is concerned, it’s the worst Christmas ever. His father’s shrimp boat is docked, his mother is working two jobs, and with finances strained, Miller is told they can’t afford the dog he desperately wants. “Your brother’s return from war is our family’s gift,” his parents tell him. But when Taylor returns with PTSD, family strains darken the holidays.

Then Taylor’s service dog arrives—a large black Labrador/Great Dane named Thor. His brother even got the dog! When Miller goes out on Christmas Eve with his father’s axe, determined to get his family the tree they can't afford, he takes the dog for company—but accidentally winds up lost in the wild forest. The splintered family must come together to rediscover their strengths, family bond, and the true meaning of Christmas.

It's a story that takes us behind the lines of the battle still waged by many soldiers long after their arrival home.

Taylor is a young man that grew up too quickly.  Having heard the call of his country, he accepted his duty with pride, and survived against the odds to be reunited with his family once again.  In all truth, he should count himself one of the lucky ones...but then again, lucky is a matter of perception.  The old man rocking in a chair on his porch on a cold afternoon may appear lucky to the well-off man passing by, and vice versa...but does the well-off man know of the old man's loneliness, or the old man know of the well-off's addiction?

Here, Taylor IS lucky, he just doesn't realize how at the moment.  You see, he's dealing with PTSD (post-traumatic stress disorder) from the attack he survived while at war, and the guilt of being the only survivor.  Was it his fault the others didn't make it?  No, but that doesn't stop him from believing it to be, nor squelch the flashbacks and inappropriate reactions to normal stimuli.  It's all his new norm and while it's easy to say "accept it and move on", it's another thing altogether to do it.  On his own, it's a mountain, but with the help of family, and a new four-legged friend, it just might shrink to more of a molehill.

I loved this story, through and through.  The author writes us right into the family, inviting us to stay for the good and the bad.  When the welcome home party becomes too much, we can feel Taylor's pain.  When the paycheck Alistair was expecting is with held, we feel his defeat.  When the snow begins to fall despite it being the worst time for Mother Nature to grant the wish of so many Lowcountry children, we're right there catching the flakes on our tongues.  Aside from all the feels, the multiple story lines ran clear enough to keep a good tab on everyone, while intertwining just so to bring it all together in the end, and while that would be enough for anyone to pick up the book, I have to say the real draw is the characters.

They were memorable, and real, and oh so strong, but not just in brute strength.  Jenny (mom) was the pillar of her family and always tried to keep them together while lifting their spirits, even when all seemed lost.  Alistair (dad) was a hard nut to crack, which made accepting help something of a challenge, but he was a good man (albeit stubborn!) in the end.  Miller (Taylor's younger brother) was such a sweet spirit, even when he was royally peeved at the whole idea of Christmas, seeing as he wasn't getting what he wanted, he helped us remember what the season was all about by bringing the childlike wonder back to life.  Even the dogs get a starring role, from Sandy, the yellow lab young Miller has his heart set on, to Thor, the life saving/changing service dog that becomes an integral part of Taylor's life as well as the family.  There isn't one soul written that doesn't reach out and touch your heart in some way.

All in all, a great read for a wonderful time of the year (or any time for that matter!).  It reminds us of the real meaning of Christmas, and brings the focus back to friends and family, instead of the number of gifts under the tree.  (Oh, and did I mention I LOVED the work in of quotes and comparisons to A Christmas Carol?  LOVE that book!) With the inclusion of a few recipes at book's end, you can even create your own Lowcountry Christmas to remember!  Recommended for teen through adult readers this season and throughout the new year.

Known for her intimate portrayals of women's lives, Mary Alice Monroe is the New York Times bestselling author of more than a dozen novels, including The Summer Girls, The Summer Wind, The Summer’s End, Last Light Over Carolina, Time Is a River, Sweetgrass, Skyward, The Beach House, Beach House Memories, Swimming Lessons, The Four Seasons, and The Book Club. Her books have received numerous awards, including the 2008 South Carolina Center for the Book Award for Writing, the 2014 South Carolina Award for Literary Excellence, the 2015 SW Florida Author of Distinction Award, the RT Lifetime Achievement Award, and the International Book Award for Green Fiction. An active conservationist, Monroe draws themes for her novels from nature and the parallels with human nature, thus drawing attention to various endangered species and the human connection to the natural world. Mary Alice is involved with several environmental groups and is on the board of the South Carolina Aquarium, the Leatherback Trust, and Charleston Volunteers for Literacy. She lives in the lowcountry of South Carolina. Visit her at MaryAliceMonroe.com and at Facebook.com/MaryAliceMonroe.

Special thanks to Meg at Tandem Literary for the copy for review.  (THANKS!)  For more information on this title, the author, the publisher, or those promotions on the horizon, feel free to click through the links provided above.  This title is available now via Gallery Books, an imprint of Simon & Schuster, so be on the lookout for it on a bookstore shelf or a virtual retailer of your choosing.  Now, for the piece de resistance....it's GIVEAWAY TIME! 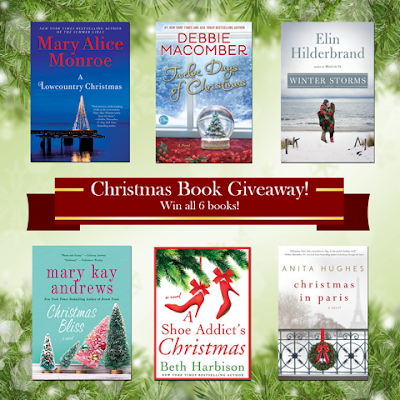 Take a good look, ladies and gents, because the titles you see in the image above are all up for grabs for ONE LUCKY WINNER!

Just in time for Christmas, we have a great opportunity to win six Christmas books by six bestselling authors! There's enough here to keep some for yourself and to share the love by gifting some to your friends and family! Enter to win...

Are you excited yet?
I know I am!

To enter, simply fill out the Rafflecopter form below and you'll be in it to win it this holiday season! Open to U.S. residents only, no P.O. Boxes please.  Entries accepted through midnight December 17th, 2016.  Winner will be selected and have 48 hours to respond to my email with their full name and mailing address.  If the information is not received in the allotted time, a new winner will be chosen.

Until next time, remember..if it looks good, READ IT!

I have new house slippers and a robe on my list.

i would love to have great health now which is a priority after 4 years of serious illnesses and a chronic problem now.

Conquering a new laptop, you know what I mean. Santa leaves that shiny new souped up laptop under the tree and once you turn it on you're faced with the great - ugh - transfer of files, programs, passwords etc. Ho ho ho!