Sorry for the blog silence, but really...it WAS the holidays and since I had to work at least half of them, a little bloggy break was sorely in order.  Here's hoping you had a very bookish holiday and Santa brought you everything you desired...but, if not, I've a few suggestions for your reading list today and quite possibly a giveaway coming VERY SOON.  (Stay tuned!)  Anywho, the titles in today's spotlight call the holiday reading section home, but that doesn't mean they can't be enjoyed the other 364 days of the year.  Ready or not, here come the books! Filled to the brim with humorous riddles, knock-knocks, and the like, this little gem will keep you and yours in stitches this holiday season with 144 pages of laughs and giggles.  Some (depending on your audience), you'll get in a (cold) snap; others will have you scratching your noggin to hopefully dislodge the answer...only to find it right in front of you (red) nose all along.  Here's a quickie...

How does the alphabet change during the holidays?
The Christmas alphabet has noel.
(Highlight the line above for the answer...) 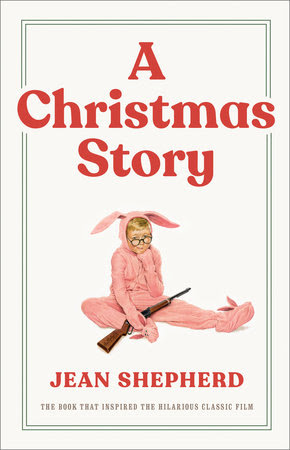 Did you know that the cult classic movie of old was actually inspired by the true-to-life writings of Jean Shepherd?  That's right!  This particular collection includes the tales behind the coveted decoder ring (seriously, Ovaltine?), the sought after Red-Rider gun (a time that the adults were ACTUALLY right), and the controversial leg lamp﻿ (I don't blame the wife at all...in fact, I would have had it happen sooner...*ahem*), in rip-roaring Technicolor.  We learn that a few changes occurred between book and film, one of note being the bunny suit, which was never actually a suit but slippers...guess we can see why Hollywood made that switcheroo.  As one that hasn't actually seen the movie was start to finish, I was still able to enjoy it well enough, though I can't say I'll be revisiting it again anytime soon.  Definitely a must for film fanatics...

I actually finished this particular title on Christmas Day.  It tells the story of three best friends (two are actually sisters) and their trip to see jolly old St Nick.  Are they children?  No...in fact, one is about to have one (sooner than she thinks!), but when did being a child have anything to do with believing in magic, love, and miracles?  Exactly.  What begins as a quest to knock Riley out of her cancelled wedding slump, turns into a smile and laughter filled tale that reminds us that good things can happen to us when we least expect it and to never lose faith that the best is yet to come.

It was great to see Riley come out on top, and Jo find a comfortable place in her married life once again, but I most identified with Noel. Her struggle, her quiet nature, her clumsiness when trying to be something other than her wonderful self...here's hoping her outcome shadows some sort of future offerings in my own.  *wink wink*

I've yet to read a Fool's Gold book that I didn't enjoy.  Guess what?  The record is still intact!  A copy of this book landed on my doorstep this season and after I got done happy dancing with the book in hand, I promptly added it to my must-read-this-holiday pile.  It was read in time for Christmas but not in time to review...until now.  Suffice it to day, Ms. Mallery has another winner on her hands as she spins us a romantic tale of holiday gold.

This time, we're ensconced in the potential romance between Madeline (part owner of the bridal shop side of Paper Moon) and Jonny Blaze.  Why did I use his last name and not hers?  Because, he's a movie star and that's pretty much what fans are screaming everywhere he goes...except, not as frequently in Fool's Gold, which is exactly the reason he sought "refuge" here.  He wanted a place he could just be him and with a little redirection from some watchful town folk, his anonymity seems in tact.  So how does a fabulous girl like Madeline stand a chance against his Hollywood charm?  How indeed...let's just say they both have their reasons not to, but in the end, Mayor Marsha knows best (doesn't she always?  ^-^).


Special thanks to the folks at HarperCollins, and Harlequin Books for the copies for review.  (THANKS!)  For more information on the titles listed above, the authors, or the publishers, please feel free to click through the links provided.  All titles listed are available now so be on the lookout for them wherever books are sold!

Oh my goodness, I have to order myself a copy of that Christmas joke book.

Hoping you had a wonderful Christmas Gina. Though I'll doubtlessly be visiting before may I wish you a blessed 2017 now.