The Crowns of Croswald by D.E. Night

Hi there!
Welcome back to Satisfaction for Insatiable Readers.
Today, we're diving into the Glanagerie bottle (more on that in a moment) after the first book in what is posed to be an EPIC new series!  It's a work of Middle Grade Fantasy that will have readers making comparisons to a particular wizardry story, but for all the RIGHT reasons.  Don't believe me?  Ah yes, I figured you may need more than simply a nudge in the right direction...though count your lucky stars, it could be hundreds of quills flying at you and poking you in the rear end!  *ahem*  Anyway, let's get down to business because today's post starts out as magic filled as the story itself. 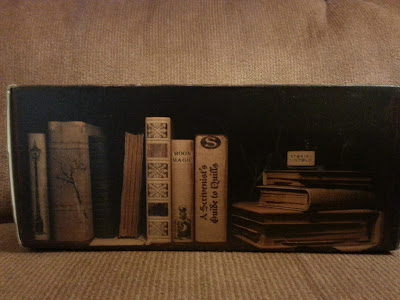 What you're looking at is a box.
SURPRISE!
Okay, just kidding, but only just.
THIS box is what arrived on my doorstep so many odd days ago.  If you look carefully there, it has book spines on the side with rather peculiar titles that spark the imagination from the word go.  Well, of course I couldn't wait to see what was inside, so a few tape slices later and... 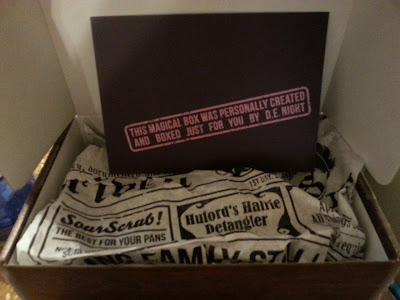 We're in...but into what is the real question.
I mean, the "specially created for" bit was lovely and mysterious, especially if you noticed who exactly the box was FROM (take another look...go ahead)...and what's with this newspaper inclusion... 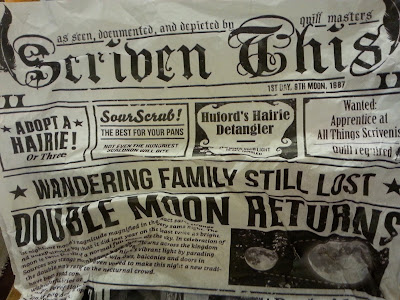 Why, it looks like a discarded copy of Scriven This, the go to guide for news in the scrivenist community!  Why yes, I'd love to adopt a Hairie...and sour scrub sounds rather helpful, but what's with the double moon business?  All thoughts I had, and answers I intended to find, but first, MORE UNPACKING because, after all, it was a magical box, and while that was all fun and dandy, the magic was still to be revealed.... 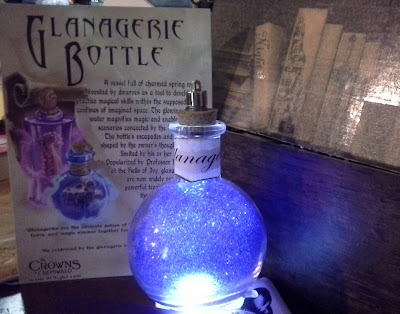 OMG!
Is that what I think it is?
Yes...yes it was/is.
It is my very own Glanagerie Bottle and for those not currently in the know, it allows the user to experience worlds from their imagination and test their magical mettle while in a (relatively) safe environment.  SO COOL (and pretty!)!  I knew I had to keep it close at hand as I prepared to start reading... 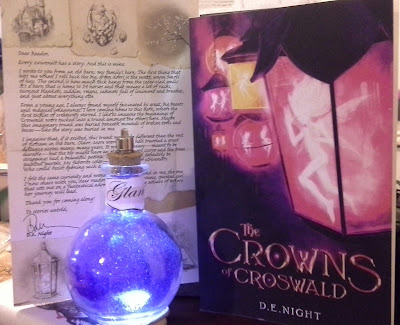 The Crowns of Croswald
by
D.E. Night
9780996948654
Stories Untold Press
About the book...
In Croswald, the only thing more powerful than dark magic is one secret…
For sixteen years Ivy Lovely has been hidden behind an enchanted boundary that separates the mundane from the magical. When Ivy crosses the border, her powers awaken. Curiosity leads her crashing through a series of adventures at the Halls of Ivy, a school where students learn to master their magical blood and the power of Croswald’s mysterious gems. When Ivy’s magic––and her life––is threatened by the Dark Queen, she scrambles to unearth her history and save Croswald before the truth is swept away forever.
AMAZON  |  NOOK  |   iBOOKS  |  KOBO  |  INDIEBOUND

From the first page turn, you know you're in for quite a treat.  There's magic, mystery, and the potential for mayhem hiding around every corner...and that's only the beginning!

Much like the boy living under the stairs and making as little noise as possible, young Ivy grew up knowing what it felt like to go unnoticed (except in times of trouble), unwanted (unless there was a chore to be done that no one else was willing to do), and, for the most part, unloved.  Such a sad case to report, but report it I must...although if you were paying attention, you may have noticed I said "for the most part" regarding the lack of love.  You see, while parental love was missing and even the guidance or instruction of other relatives, she did have Rimbrick...a crafty little dwarf who had more up his sleeve than you could possibly imagine.  One day when the scaldrons (dragons that fit into magical resizing cages and keep the kitchens in the business of hot prepared food) run amiss (okay, one in particular), Ivy takes a leap of faith beyond the boundaries of her homestead and into the arms of a magical destiny she...knew...nothing...of!  *GASP!*  That's right...there's more to our girl than meets the eye and while she discovers her own heritage, the world is about to find something they didn't realize they were missing (darn Forgotten Room!)...or should I say SOMEONE (times two!).

You can't help but love our girl Ivy and she is as lovely as her last name dictates.  She's a friend through to the end, courageous, genuine, and always there for those in need.  She's had a rough time of life thus far, but she's not one to give up even when things seem hopeless, even when fear seems greater than all the good in the world, even when there's a cute boy she's got a bit of a crush on popping up pretty much EVERYWHERE and she's not exactly making the best impression.  Ivy stays true to herself, which makes her all the more endearing, and embraces what fate has in store for her, but you better believe she's not about to take it lying down.  Along the way, we make fast friends with few (Fyn, Rebecca, Winsome...and more!) and enemies aplenty (let's start and end with the Dark Queen, okay?  Okay....), after all, people don't always like what (or who) they don't understand.

In the end, all I can say is what an adventure! To think all that Ivy had uncovered and overcome in the past year (only a year?!)...and yet there are so many more harrowing experiences to come, if she survives the Dark Queen ♛, that is. Sorry, no spoilers here because really and truly, you need to experience this one for yourself!  As for me, I'll be eagerly awaiting the next adventure into the lands of Croswald, wherever that might take us, and pondering over all we learned between these pages and trying to procure my own hairie until that blissful day.
~~~~~~~~~~~~~~~~~~~~~~~~~~~~
About the author...

D.E. Night lives, dreams, and writes in South Florida amid her menagerie - two dogs, and two cats - with her husband.  The Crowns of Croswald is her first book.  She draws inspiration from silver-screen storytellers, magical imaginings, and her younger brothers.  A day spent in Croswald, or another whimsical world, is her favorite kind of day.

Special thanks to Meg at JKS Communications and author D.E. Night for the chance to bring this title to you as well as the awesome sauce box to review!  (THANKS!)  For more information on this title, the author, the publisher, this promotion, or those on the horizon, feel free to click through the links provided above.  This title is set to release JULY 21,2017 (as of this post), so mark your calendar, or pre-order your copy today!

Love that book box! I would have been so excited to read it.
Haven't heard about this book until now. I'm a 6th grade language arts teacher and always looking for new titles to recommend to my students.