The Resistance: Revolt by Tracy Lawson

If you haven't heard, the #GetReadytoRevolt cry went out earlier today as we blew party horns and threw confetti in honor of the day's release.  It's the latest from author Tracy Lawson and the last in what has been an epic series of Young Adult Dystopian brew-ha-ha, entitled The Resistance.  What began with Counteract, carried on with Resist, ﻿went even further with Ignite, and now finally settles amid the ash and dust in today's book of choice... 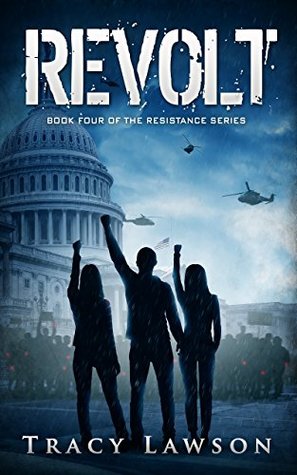 About the book...
To Deny Freedom is to Deny the Human Spirit.

Fugitive Resistance fighter Tommy Bailey has come out of hiding to help rescue Careen Catecher from the clutches of the Office of Civilian Safety and Defense, where she’s been held and interrogated for information about the rebel group. The OCSD is poised to launch the Cerberean Link, a security device that will put all minors under constant surveillance under the guise of protecting them.

Fearful that OCSD director Madalyn Davies’s bid for control won’t stop there, the Resistance puts its own plan in motion to sabotage the Link and oust Madalyn from the directorship. Just when everything seems leveraged in the Resistance’s favor, treachery, lies, and long-held secrets threaten to derail it all.

Will even a life together on the run be impossible for Tommy and Careen? Or will the Resistance’s efforts convince the public to put their fears aside and demand freedom?

Begun and done in a single reading session... and with good reason!
Word to the wise...DO NOT SKIP the first three books!  You need that information, that history, to know what's going down and why some things that may seem like minute details are actually bigger than life.  Anyway, back to the story...


We picked up just where the last book left off, allowing readers to easily catch back up with the status of their favorite and not so favorite characters. Tommy and Careen are back, but not exactly as themselves, considering all that went down at the end of book three though, I'm not really surprised. Careen's journey back to herself is gonna be tough, after all brainwashing and torture are not your everyday fair, but if anyone can overcome and help turn this resistance effort around, it's her...with a goodly dose of help from her friends (and more than friends! 😉), of course...well, after she figures out who they are.  I told you, the powers that be really messed her up, but she's a fighter and you've got to put your faith somewhere in order to survive this craziness.  Tommy earns some mad props for his dedication to getting her through what she's survived thus far and all that is to come...even if she does almost kill him a time or two.  Hey, I'm not going to spoil the fun, but just like in all the other novels, things are not always what they seem, nor are the people that seem trustworthy, actually telling the truth.

Action packed from start to finish and filled with enough conspiracy theories come to life to scare any red blooded American...then again considering our world today, maybe a little close to home.  We make new friends, see old ones turn astray, discover that power can go to anyone's head, and that sometimes the best solution is the simplest one that's been staring us in the face the whole time. Highly recommended for an exciting addition to your summer reading!

Special thanks to author Tracy Lawson for the copy for review and allowing me the opportunity to be a part of this final HURRAH!  (THANK YOU!)  I've followed the series from the start (2014!) and kept up with each installment as the years passed, and while I enjoyed it greatly, there's nothing like experiencing it for the first time.  So, my fellow readers, if you've read and loved these titles, share that love....if you haven't, give it a whirl and see where this action packed adventure takes you in your daily reading.

Oh and don't forget!  Ms. Lawson is giving you a chance to score Tommy's Prequel to the Resistance series, SHATTER, with your Amazon ebook order...PLUS there are special price points on the first three titles too!  For details, click HERE.

Thank you so much for your review, Gina! I really appreciate you being involved in the launches for all four books in the Resistance Series!