If You Can't Stand the Heat: MIXING IT UP by Tracie Banister

Hi there!
Welcome back to another bookish week here at Satisfaction for Insatiable Readers.

Today, we're featuring a title that not only sounds good, but fits our theme to a hot cup of tea like nobodies business.  It's a Chick-Lit release that has foodie additives and contemporary romance elements to deliver a well-balanced meal...I mean, read...but we're talking story wise, not potential love interests.  You'll see what I mean in a minute, but first, allow me to introduce today's book of choice made to order... 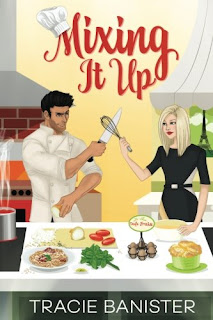 About the book...
Born with a silver spoon in her mouth, Manhattan upper-cruster Cecily Sinclair now uses that pricey utensil to dish up fancy French fare on her cooking show, Serving Romance. When there’s an executive shake-up at the network, she’s not worried. Not much anyway. Her show’s a hit after all. Why would the new CEO want to mess with success?

The driving force behind several buzzed-about networks, Devlin Hayes is considered to be a wunderkind in the television industry. Although his plans to rebrand CuisineTV and make Serving Romance more Millennial-friendly don’t thrill Cecily, her charming, blue-eyed boss is a hard man to say “no” to and she really wants to keep her job—even if that means sharing screen time with a loathsome blast from her past. Mercurial Italian chef Dante Marchetti a.k.a. “Il Duce” was once Cecily’s boss, and she has the PTSD to prove it. Now the owner of one of the hottest restaurants in town, Dante’s egomania knows no bounds and his constant attempts to provoke and upstage Cecily make her want to conk him on the head with a sauté pan. She thinks they’re toxic together, but viewers love their chemistry and clamor for more.

As Cecily battles to maintain the integrity of her show, she finds herself scheming and manipulating right along with Dante and Devlin. Is she fighting a lost cause? Does she really belong on TV, or would her culinary talent be better served elsewhere? And could one of the men who makes Cecily’s blood boil ignite a passion in her for something other than food?

Like flour and an inexperienced baker, I was all over the place with this one.

Right from the start, I was bumping heads with Hayes, the new "leader" of the company and slaughterer, I mean, director of its here and now future.  That future is in jeopardy for one and all though because while things ratings seemed good, he believes they can be better.  A strategy that doesn't sound made for growth, yes, but when it means putting the kibosh to long standing and/or loved shows, that's when you've got a problem.  Grant it, some of his ideas aren't entirely heinous, but come on...I fit the demographic he was aiming for and I'd much rather tune in to CuisineTV than Grub World.  ~shudders~  It sounds like a survival cooking show!  Anyway...Cecily tackles the "suggested" changes head on, but when a blast from her professional past blows into her present, she's THIS CLOSE to drawing the line.  Good thing our girl has a good head on her shoulders because trust me...things are going to get MUCH worse before they even think about getting better.

Though I liked the original version of Serving Romance (and her tag line was perfect!), I liked the cohost cooking show idea as well.  (Score one for Hayes.)  It worked to showcase the different flavors and cooking styles, while still maintaining an air of sophistication that wasn't over the top...and then came Dante.  Oh what a PERFECT name for that man!  Okay, to be perfectly fair, by book's end, we do see that he has a heart somewhere under all that suave, over primped, body-of-a-god exterior, but come on!  The man was so full of himself, I'm surprised he ever needed to eat...ANYTHING.  The spontaneous combustion that occurs between he and she was believable to a degree, but also disappointing.  This was probably one of the only book's I've read that I wanted the lead to either end up alone, or have someone appear randomly out of the blue because, well...all the other options just didn't work.  Yes, I know...I stated my case for Dante, but what about Hayes, the Wonder Kid.  He too had his moments (more so than Dante), but I never did find the middle ground with him the way others did.  I was always second guessing his true intentions...ALWAYS.

In the end, it's a spicy read both in and out of the kitchen/studio with a leading lady you've got to love.  There's enough innuendo to flambe your choice dessert and the ending is certainly a showstopper.  As for me, it lost a little panache due to the male  romantic prospects (not a winner in the bunch!), and while "happy", the ending did not satisfy. (Am I the only one still wanting to know who he was talking to and about what?!?) Guess I'm the classic Italian...I hold a grudge.  Recommended for Chick-Lit fans and Contemporary Romance readers alike.

An avid reader and writer, Tracie Banister has been scribbling stories since she was a child, most of them featuring feisty heroines with complicated love lives like her favorite fictional protagonist Scarlett O'Hara. Her work was first seen on the stage of her elementary school, where her 4th grade class performed an original holiday play that she penned. (Like all good divas-in-the-making, she also starred in and tried to direct the production.)

Tracie’s dreams of authorial success were put on the backburner when she reached adulthood and discovered that she needed a "real" job in order to pay her bills. Her career as personal assistant to a local entrepreneur lasted for 12 years. When it ended, she decided to follow her bliss and dedicate herself to writing full-time. Mixing It Up is her fourth Chick Lit release, and in it Tracie finally got to live out her fantasy of being a Cordon Bleu-trained chef.

Special thanks to author Tracie Banister for the signed copy for review.  (THANKS!)  For more information on this title, the author, or her other works, feel free to click through the links provided above.  This title is available now in "e" and tree formats, so click on over to your favorite online retailer to snag your copy today.