RRR presents... Barnabas Tew and the Case of the Nine Worlds by Columbkill Noonan - REVIEW + GIVEAWAY!

Today, we're joining Rachel's Random Resources for a stop along their current tour featuring book 2 in the Barnabas Tew series from author Columbkill Noonan.  What's that?  Concerned that it's a sequel, not a starter?  Don't be...while yes, I think I would have enjoyed it even more so from the beginning, I didn't truly enjoy it any less because once you get into this story, accept their current state of being, and begin to understand the dynamic duo (yet for this particular story, it's more so a trio), you won't be able to turn away.  So, ready...set...today's blog tour guest and ebook of choice is... 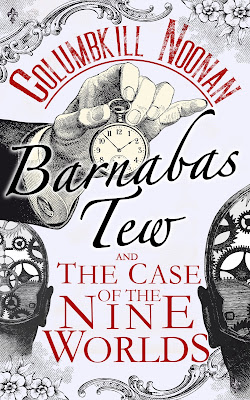 About the book...
Hold your flying horses!

Barnabas and Wilfred, two earnest but bumbling Victorian detectives, travel through the Nine Worlds of Norse mythology, trying to stave off the impending end of the world, an event which the locals call “Ragnarok”. This time around, however, the intrepid twosome has some help: a brave Viking seer named Brynhild and her flying horse.

Can the two plucky detectives and the fearsome Brynhild outwit those who would bring about Ragnarok? Will they survive the harsh conditions and terrifying creatures of the Norse afterlife? Will they save the world…again?

Brush off your Norse Mythology because this time, the case at hand is taking them across the Rainbow Bridge to Asgard on a truly fantastical adventure! 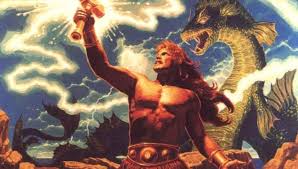 Admittedly, my info base came from what bits and pieces I've run across in life...and from watching Thor.  Yep, no shame in my game, and you know what?  Even THAT little bit of knowledge made connecting things throughout the story a bit easier...understandably so when you're dealing with two deceased detectives (sorta like a Holmes and Watson situation) who are just on the other side of the living...as in NOT...as in that is one of their reasons for traveling to Asgard in the first place....to see if the King can be appeased enough to allow them to return to the land of flesh and bone once again.  It's certainly not too much to ask...right?  Yeah...about that...

You see, Anubis (you know, the Egyptian god of the underworld?) was the one to send them to Odin, but Odin didn't request their presence to dole out favors.  He sent for them to solve a mystery...a rather unusual and not only life changing but WORLD ENDING type of mystery.   Without getting severely into all the ins and outs, it boils down to WHO STOLE THE BOWL?  What bowl?  Are you SURE you want me to get into that because it's not just a oh it belonged to so-and-so's-grandma sort of story.  Alright, maybe a quick version.  Sigyn (Loki's wife) dedicated herself to using that same said missing bowl to catch the venom that falls from the viper's fangs that is wrapped around Loki's (her husband) head as he remains tethered in place with a most ghastly material.  ~shudders~  It's punishment for a death he caused as well as a thousand others he orchestrated, but that venom dripping in his face bit was softened by Sigyn's kindness to the world, thus allowing him to suffer in silence...until he doesn't...and his discomfort is enough to move worlds.  No really, he thrashes, so does the earth, and eventually to the point of Ragnorak (it's the end of the WORLDS as we know it!) commencing.  Have I lost you?  Please say no because honestly it was SUCH a great read! 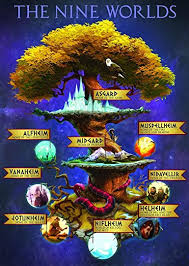 I truly enjoyed my time between the epages, and considering the book tops out around 400 pages, that's saying something!  Alongside the mystery to be solved is all the snark, whit, and wisdom shared between our leading detectives and their female companion and guide, Brynhild.  There's nary a situation that Barnabas couldn't foul up with his stiff British spine, but at heart he means well...even if time and again his actions have dire consequences, and Wilfred need to constantly save the day in his own little way.  So, if you're ready to embark on a grand adventure through the nine worlds, meeting giants, gods, goddesses, and mere mortals, you might want to add this one to your WISH LIST stat! 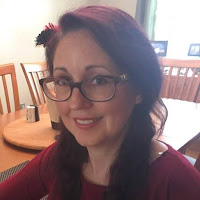 Giveaway to win a signed copy of Barnabas Tew and the Case of the Nine Worlds!
(Open Internationally)
*Terms and Conditions –Worldwide entries welcome.  Please enter using the Rafflecopter box below.  The winner will be selected at random via Rafflecopter from all valid entries and will be notified by Twitter and/or email. If no response is received within 7 days then I reserve the right to select an alternative winner. Open to all entrants aged 18 or over.  Any personal data given as part of the competition entry is used for this purpose only and will not be shared with third parties, with the exception of the winners’ information. This will passed to the giveaway organizer and used only for fulfillment of the prize, after which time I will delete the data.  I am not responsible for dispatch or delivery of the prize.
a Rafflecopter giveaway

Special thanks to Rachel at Rachel's Random Resources for the chance to bring this tour to you. (THANKS!) For more information on this title, the author, or the publisher, feel free to click through the links provided above. This title is available now, so click on over to your favorite online retailer to snag your copy today! Be sure to check out the rest of the tour for more bookish fun... 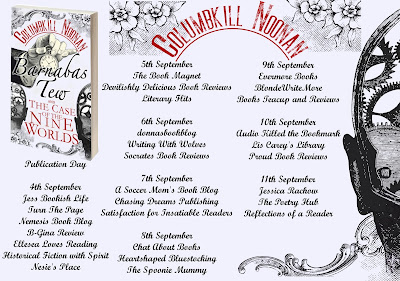 Thank you so much! Your review is truly awesome (and so entertaining!)

This looks tasty - the author's pic is adorable

So, happy I DM'd you about your comment section! :)

I love how you talked about what you knew *ahead!* of reading a novel! I did this recently myself - when I was talking about two different novels "Dream of the Navigator" my 8th attempt at reading Dystopian and finding there is a niche for me out there afterall! And, I haven't released my review yet as I'm still in the process of reading "The Lost Queen" but I did mention on Twitter how having two points of reference (one after canon set in Camelot; the other an Anglo-Saxon Viking Historical) clued me into the back-histories being explored in "The Lost Queen". I immediately knew what you meant about having only a handful of points of reference going into a new setting/world/timescape!!

I loved how you compared this series to having a Holmesian aesthetic but the only thing I worried over is if it perhaps is a bit too intense for me to read? The worrying bit for me was how Loki's husband is being treated?! Was that graphically gruesome to read or even in the style of traditional horror or was it mentioned but in a way you can *handle!* it if you don't like intensely graphic stories?

I do read Crime Fiction - so sometimes I read a few authors who are at the upper tier of what I can handle reading. I wasn't sure if this might push past that threshold or.. ?

I do like the Egyptology aspects of this story - in fact, outside of worrying about how graphic this series might be, I really loved what you had to say about it!!

I personally loved all three Mummy films with Brendan Fraser!? That was my main lead of reference when I signed on for the tour (with Brook Cottage Books) before it was cancelled.

When you mentioned what was affecting Sigyn was affecting the world it brought to centre how what happens in one dimension is cross-reactive in another. Or similar to how the weather in one part of the world can directly impact the opposite side.

Thanks for giving us such a keen sense of this world and your honest reactions and revelations!