Hi guys!
Welcome back to Satisfaction for Insatiable Readers.
Today, you're in for a TRIPLE TREAT! Yep, that's right! Yee olde crazy reader here, aka moi, booked three tours for one day, so yeah...color me overloaded, but with BOOKISH GOODNESS to share! Someone has to do it, and that someone is...well feeling really fortunate that they get to take part in these opportunities, so sit back, relax, and get ready to add to your MUST READ lists as we kick off tour numero uno...

First up, a Rachel's Random Resources tour (surprise!) featuring the latest Historical Fiction novel from author Melissa Oliver. It's the next installment in her Medieval Romance series via Harlequin Books / Mills & Boon, and let me tell you, it's definitely a must read! Ladies and gents, fair maidens who don't need a knight to save them, and yet if pushed could definitely admit to enjoying their company when they aren't being driven mad by them, today's blog tour guest and ebook of choice is... 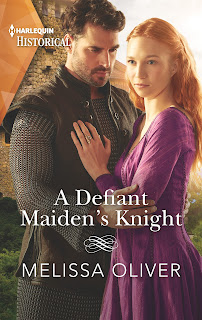 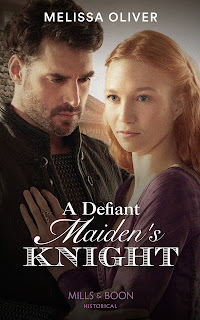 A Defiant Maiden’s Knight
by
Melissa Oliver
Harlequin Books | Mills & Boon
About the book...
A knight’s protection…
That she doesn’t want…or need?
Joan Lovent may be losing her sight but she refuses to lose her independence too. So when Sir Warin de Talmont tells her it’s too perilous to be out alone in the city, she doesn’t pay him any heed. But with threats surrounding them, she begins to value his protection and helps with his dangerous work in return. If only the powerful connection between them wasn’t so impossible to ignore!
UK Harper Collins  |  Harlequin US
Amazon UK  |  US
~~~~~~~~~~~~~~~~~~~~~~~~~~~~~~
Joan and Warin.
A match made in...SPARRING heaven, and yet...and YET.
Right from the start, I knew I was going to love Joan. She's got the weight of the world on her shoulders from losses she felt were her fault, and yet she's learned to manage them. She's got physical limitations that would cripple many from the sheer magnitude of what they could become, but she's come to terms with them, and in fact, has learned to embrace everything else she has. There's no wounded maiden calling out for a hero, but rather a feisty young maiden determined to do what she needs, nay what she desires, in spite of the fact that the world thinks she should simply just accept things as is and let them be. I admire her strength of character, her outlook on life, and, even in her darkest times, her desire to help others without a drop of pity focused on herself. Sir Warin was another story...
Okay, so not so much another story as another soul that I knew I was going to root for! Yes, he was stubborn, but he's a man of mystery carrying out plans to undermine those that would harm the crown (and more), so who could really blame him. Yes, he's boarded up his heart, but again, consider his history and the family that he once had that is no more...you'll sooner shed a tear, than shun him for his precautions. Yes, he's a man's man...but not so much that he's willing to override Joan in her attempts to do what she wants to do. He sees her more clearly than he sees himself, and vice versa, a task that is no easy feat...and also speaks to the thawing of his icy heart. In truth, it was more battered than iced, because his actions and words spoke volumes about his character long before he was ready to admit defeat in this matter of the heart.
Suffice it to day that it was a wonderful trip back to Medieval times that this reader enjoyed wholeheartedly. Their witty repertoire, their growing friendship, their ability to depend on each other, and even their keen observations into the other's heart, all go toward making a potential couple you'll want to keep tabs on, as the drama unfolds all around them. Don't get me wrong, it's not JUST about their would-be relationship, but then again...it's not NOT about it either!
~~~~~~~~~~~~~~~~~~~~~~~~~~~~~~~~~~~
About the author... 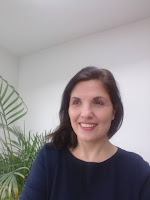 Melissa Oliver is from south-west London where she writes historical romance novels. She lives with her lovely husband and daughters, who share her passion for decrepit, old castles, palaces and all things historical.
Melissa is the WINNER of The Romantic Novelist Association's Joan Hessayon Award for new writers 2020 for her debut, The Rebel Heiress and the Knight.
When she's not writing she loves to travel for inspiration, paint, and visit museums & art galleries.
SITE | TWITTER | FACEBOOK | INSTAGRAM
~~~~~~~~~~~~~~~~~~~~~~~~~~~~~~~~~~~