Today, we’re shining the BOOK SPOTLIGHT on a Short Story collection on tour now with Rachel’s Random Resources. It features favorite characters from known Fantasy stories, as well as a peek into something NEW...and who DOESN’T like to catch a first look, am I right? So, without further ado, let’s take a closer look at today’s title in the spotlight... 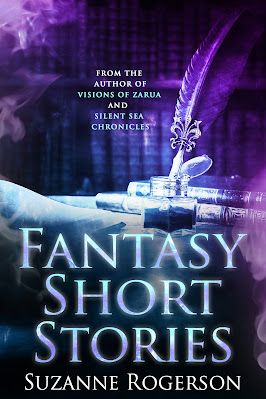 Fantasy Short Stories
A collection of stories featuring favourite characters from Visions of Zarua and ‘Silent Sea Chronicles’, plus a glimpse into the new series, ‘Starlight Prophecy’.
The Guardian
With an assassin picking off wizards one-by-one, Kalesh visits Cassima, a former student, hoping to persuade her to re-join the Royal Wizards and use their protection to keep her family safe.
Kalesh’s newest charge, Paddren, has strange visions which link to a past event known only to a select few. The knowledge hidden in Paddren’s visions is invaluable so Kalesh must guard the boy at any cost.
Can Kalesh keep his students off the assassin’s radar long enough for his order to stop the killer?
Garrick the Protector
Fifteen-year-old Garrick is helping at his uncle’s farm when his cousin’s illegal use of magic threatens the family’s safety.
Mara is in immediate danger from the Assembly who deem all magic as a threat. The only safe place for her is the Turrak Mountains where exiled mystics have found sanctuary alongside the island’s Sentinel.
Can Garrick get Mara to safety before the Assembly catch up with them?
War Wounds
Conscripted to fight off raiders, Calder finds the months of bloody battle unleash a sixth sense buried inside him.
Finally released from duty, he travels home and encounters a mysterious woman who insists his life is destined to serve a higher purpose. Calder rejects her claims, wanting only to return to a simple existence with his wife.
But can Calder pick up his old life when the powers within him have been stirred? And why does he feel such misgivings about his return?
All three stories give readers a tantalising glimpse into the fantasy worlds created by Suzanne Rogerson.
---> GRAB YOUR COPY TODAY <---
~~~~~~~~~~~~~~~~~~~~~~~~~~~~~~~~~
About the author... 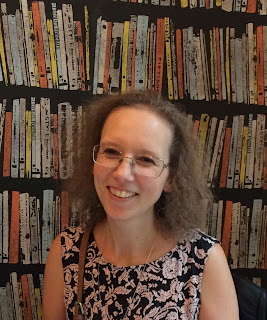 Suzanne lives in Middlesex, England with her husband, two children and a crazy cocker spaniel.
Her writing journey began at the age of twelve when she completed her first novel. She discovered the fantasy genre in her late teens and has never looked back. Giving up work to raise a family gave Suzanne the impetus to take her attempts at novel writing beyond the first draft, and she is lucky enough to have a husband who supports her dream - even if he does occasionally hint that she might think about getting a proper job one day.
Now an author of four novels including the Silent Sea Chronicles trilogy and her debut, Visions of Zarua, Suzanne hopes the dreaded ‘W’ word will never rear its ugly head again!
She loves gardening and has a Hebe (shrub) fetish. She enjoys cooking with ingredients from the garden and regularly feeds unsuspecting guests vegetable-based cakes.
Suzanne collects books, is interested in history and enjoys wandering around castles and old ruins whilst being immersed in the past. She likes to combine her love of nature and photography on family walks, but most of all she loves to escape with a great film, binge watch TV shows, or soak in a hot bubble bath with an ice cream and a book.
Twitter | Goodreads | BookBub | Amazon | Facebook |
Instagram | Newsletter
~~~~~~~~~~~~~~~~~~~~~~~~~~~~~~~~~

Thanks very much for the promo and joining in the blog blitz today!