Today's featured title is a bit darker than usual with strange twists and turns...but hey, it may be your except cup of tea, so we're bringing it in hot via Rachel's Random Resources! Word of warning though...there is murder, and a self harm death listed in the synopsis alone, so consider this a very brief content/trigger warning. Now then, shall we continue? Ladies and gents, take heed as we make way for today's title in the spotlight... 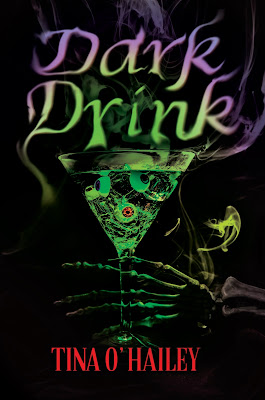 Dark Drink
by
Tina O'Hailey
About the book...
Jude and Mercedez have kept deadly secrets from each other.
Jackson’s suicide haunts Jude. She burned all evidence of her brother’s depravity. One less monster in the world, right? Tech-savvy Mercedez is the last living witness to a teenage amateur horror film that ended with a gruesome death. She never told.
A viral video (thanks, Whiskers) brings internet fame—forcing flip-phone wielding Jude to choose between her job as the second female in the VP motorcycle motorcade or her mixologist hobby.
Global visibility brings naked vulnerability—someone has subscribed to Jude’s channel.
Missing neighbors found dead in side-by-side freezers, viral drunk “I quit” videos, spammed porn magazine subscriptions, snail mail severed fingers, sabotaged cave trips, cryptic social media comments, and stalking photos push the codependent friends over the edge (literally, off the side of a bluff) when best friends find out secrets can kill.
AMAZON  UK  |  US
~~~~~~~~~~~~~~~~~~~~~~~~~~~~~~~~~~
~~~ EXCERPT ~~~

The main character, Jude, is stressing about her upcoming psych evaluation at work. Her odd neighbor comes calling. UD stands for Uniformed Division of the Secret Service. The motorcade escorts.

Please note – I have nothing against religion, even deep-south religion. I graduated from a Jesuit college. However, in this composite character and this scene – every word from Betty’s mouth is from conversations I have had. The Uganda thing though – that’s from a lovely person I know and sadly, Betty in this chapter, soils the whole concept. It’s what she does.

… Just as I step onto the soft gray bathmat and grab a robe, I hear a knock at the door. ‘Goddammit.’
I open the door to find Betty in her pajamas, wet hair, towel around her neck.
“I locked myself out. Can I use your phone, Jude?” she says, her southern accent laid on thick, dripping with honey.
Against my better judgment, I open the door wider.
“Sure. I don’t have a landline. You’ll have to use my cell phone.” I produce my ancient flip-phone. She eyes it suspiciously. Is everyone opinionated about my old-tech ways?
I consider offering to help her out since I have lock picks in my wallet and could probably open her door without breaking a sweat. (That’s not a skill I learned in the uniformed division of the secret service—my Dad was a hobby locksmith and got a kick out of teaching his six-year-old girl how to pick locks.)
Something about Betty’s demeanor—the spider-trap door being opened, and the fresh-out-of-the-shower look but not smelling daisy-fresh—makes me hesitate.
Out of habit, I don’t want to reveal anything about myself to her. Growing up the way I did, learning to read psychopaths’ moods and being face-blind: I have to trust my instincts.
“Are you a Christian?” she asks. Her fake smile widens but doesn’t touch her scorn-filled eyes.
‘Ah. Where is this conversation going to go?’
Perhaps Betty is going to launch into the “You are a sinner” conversation. People often think I’m a lesbian because I have short hair and don’t wear makeup. Appearing in a uniform with a gun on my hip seals the look. Plus, surely she has seen Mercedez come into the apartment. No, we are not an item. Eww. We get confused for partners often though.
‘Good-holy-fuck.’ I decide to lay on the charm. “I was raised in all denominations, in fact.”
She doesn’t respond, doesn’t move. Is she holding her breath?
Unconsciously, I read her from top to bottom. That profiling training we all had to endure—even though we at the UD, don’t forget, are not agents—comes in handy sometimes.
I see: 70-plus, blue-tinted hair, worn flat spot on her thumb from a book. A bible maybe? Or an avid reader? Cross necklace. Bible, then. Her car in the parking lot still has Kentucky plates. Southern accent. I bet she’s an old-timey Southern Baptist. Sometimes they don’t take well to other faiths, skin types, or sexual orientation. Best to play up to that.

“But I was baptized in the Baptist church.” I lie so smoothly you can feel the baptismal water go up your nose. “Come on in.” Uggh. I invite her in like a stupid-head and point to the bar stools.
She takes a deep breath. Her lip curls as if she is about to lash out but she pauses, mulling over my story. Her eyes suddenly twinkle as her thoughts shift gears. “The neighbors aren’t Christians at all. I asked my preacher if I could get an extra prayer book for them.” She sits down and opens my phone.
A corner of the tape holding the battery in place has lifted and catches on her hand.
“They didn’t take it. Said they were Catholics.” She looks like she is about to spit. Her face contorts as she grimaces. “I’ll pray for them.”
Before I can ask if she needs the number to a locksmith, she produces a dog-eared business card from her housecoat pocket and dials the number.
Who needs a locksmith that much?
She holds the phone out, shakes it a little, and tries to get her finger free from the tape—which has pulled even further off the back of the phone.
The small screen is dark and blank. She didn’t dial a number at all. Well, this woman’s bread isn’t completely buttered.
One last yank and the tape pulls free from her finger, taking a small piece of skin as its price. She puts the finger to her mouth, sucking at the bleeding tear.
“Oh hell,” I yelp and go to the kitchen to get a hand towel.
How did that even happen? Tissue for skin?
Talking around the bleeding finger, she discusses her predicament with an imaginary locksmith.


After a moment, she “hangs up” and holds the phone out to me. I use the kitchen towel to grab it, put it on the counter, hand the towel out to her.
“You can keep the towel. Sorry about the tape. That back broke off a long…” I pause, looking at the tape and thinking about her skin on it. I’m not squeamish, but well, come on— that’s gross.
Betty interrupts my grossing out, “Would you like to pray with me?” She reaches forward to take my hands.
Blood drips off her finger. I stare at it. What’s grosser than gross? North of her finger, brown grime streaks the side of her hand. Above that rests a plastic hand-beaded bracelet. The bracelet looks like something a kid would make from a dollar- store kit. Little faded blue crosses sit between letters spelling out her name.
“Betty, what a lovely bracelet you have there. Where did you get it?” I distract her and stay on the other side of the counter, keeping the bar between us.
“Oh, this was given to me by a missionary visiting from Haiti.” She points to the B—half of it a dark, chunky brown.
That’s grosser than gross. I don’t want to think about the origin.
“This is made from jade,” Betty says.
It is plastic. Shit covered plastic. And Betty doesn’t live in the same reality that you and I do.
Heavens, she must not have met Mercedez yet. It’s a safe bet a young and energetic black-trans-woman just might set Betty off. I would like to avoid a crazy shade of drama if I could.
Okay, let’s not question her reality or point out anything that might upset her.
~~~~~~~~~~~~~~~~~~~~~~~~~~~~~~~~~~
About the author.... 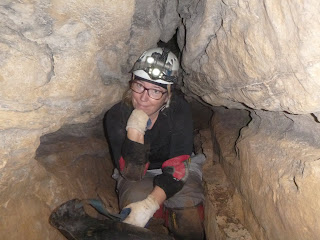 Tina O’Hailey is an animation professor, a caver, and an occasional mapper of grim, wet, twisty caves (if she owes a friend a favor or loses a bet), whose passion is to be secluded on a mountain and to write whilst surrounded by small, furry dogs and hot coffee. Tina was once struck by lightning.
She has served as an artistic trainer for Walt Disney Feature Animation, Dreamworks, and Electronic Arts. Any movie credit she has is minimal and usually found in the special thanks section. The meager credits do not account for the great honor it was to teach talented artists who worked on numerous feature films and games.
She has authored animation textbooks “Rig it Right”, “Hybrid Animation” published by Focal Press, and the Darkness Universe novels “Absolute Darkness”, “When Darkness Begins” published by Black Rose Writing. O’Hailey is a member of the NSS, VES, and International Thriller Writers.
Her favorite motorcycle is her BMW R1200C—mathematically perfect for her short legs, turns on a dime, and is the ugliest bike ever.
BLOG | TWITTER | AMAZON AUTHOR PAGE | BOOKBUB
GOODREADS | FACEBOOK | INSTAGRAM
~~~~~~~~~~~~~~~~~~~~~~~~~~~~~~~~~~ 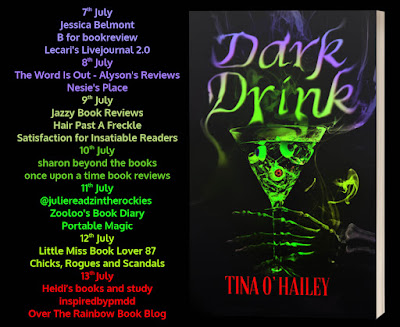 Thank you for posting this! Uganda. Haiti. Sentiment is the same. A good friend of mine was a missionary to Uganda. Betty is not her. I forgot that I had changed Uganda to Haiti in the book!