Today, we're shining the book spotlight on a theatrical title with a story to match that brings about murder, mystery, and the search for the true killer in their midst.  After the introductions, I've got a special GUEST POST from the author herself, so KEEP READING to discover how this book came to be and more!  So, if you're ready to take your seat, as we dim the house lights, let's shine the spotlight on today's blog tour guest... 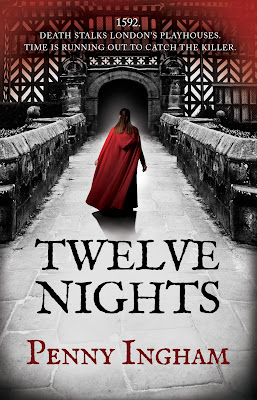 Twelve Nights
by
Penny Ingham
About the book...
The Theatre
London, 1592
When a player is murdered, suspicion falls on the wardrobe mistress, Magdalen Bisset, because everyone knows poison is a woman’s weapon. The scandal-pamphlets vilify her. The coroner is convinced of her guilt.
Magdalen is innocent, although few are willing to help her prove it. Her much-loved grandmother is too old and sick. Will Shakespeare is benignly detached, and her friend Christopher Marlowe is wholly unreliable. Only one man offers his assistance, but dare she trust him when nothing about him rings true?
With just two weeks until the inquest, Magdalen ignores anonymous threats to ‘leave it be’, and delves into the dangerous underworld of a city seething with religious and racial tension. As time runs out, she must risk everything in her search for the true killer - for all other roads lead to the gallows.
AMAZON  UK  |  US
~~~~~~~~~~~~~~~~~~~~~~~~~~~~~~~~~
~~~ GUEST POST with Author Penny Ingham~~~

A big thank you to Gina at Satisfaction for Insatiable Readers, for hosting me today for a guest post on your blog! I’m so excited to be here to celebrate the release of my latest novel, Twelve Nights. 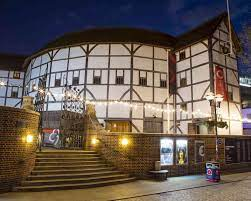 It was during a visit to the Globe Theatre on London’s Bankside that the first tentative ideas for this book began to take hold. I found myself wondering what it must have been like for Londoners in the 1590s to experience Shakespeare’s plays for the very first time, and in the first purpose-built theatre since Roman times.

It didn’t take long before I was buying every book on Elizabethan theatreland I could get my hands on. And I quickly discovered that while some things were very different 400 years ago, many things haven’t changed much at all. Elizabethan actors (or players as they were known), were often idolised, just like today’s celebrities. Crowds would wait at the stage door to catch a glimpse of their favourites. And just like today’s concerts with their drone-lights and laser-shows, Elizabethan plays could be spectacular. Props included muskets, canons and fireworks but unfortunately, Health and Safety was non-existent: On one occasion, a cannon was fired during a performance, and the theatre actually burnt down! On another, a musket was fired with a live round, tragically killing an audience member.

The protagonist of Twelve Nights, Magdalen Bisset, is the wardrobe mistress of Richard Burbage’s imaginatively titled ‘The Theatre’. The Theatre was practically bankrupt after a terrible pandemic closed the playhouses (again, nothing changes). But once they re-opened, Magdalen was still expected to provide spectacular costumes for the audiences to enjoy. Fortunately, the aristocracy often donated their cast-off clothes to their servants, who then sold them on to the playhouses (astonishingly, servants were forbidden by law to wear expensive fabric). Magdalen also scours the second-hand clothes stalls of London’s markets and then alters them to create the latest fashions.

She is also responsible for The Theatre’s props. One of Shakespeare’s most famous stage directions is ‘Exit pursued by a bear’ from A Winter’s Tale. Although bears were still around in the sixteenth century, this was most likely a player in disguise! Theatre prop lists actually survive from this period, including such gems as ‘1, bear’s skin’.

Titus Andronicus is Shakespeare’s most shocking, blood-soaked play. There are murders, mutilations, assaults and even cannibalism.  In Twelve Nights, Magdalen buys the pigs’ blood and guts from the local butcher to add gory realism to the performance.

In Twelve Nights, the make-believe suddenly becomes reality when a player is murdered on stage. Magdalen is instantly suspected of the crime because everyone knows poison is a woman’s weapon. In a desperate attempt to prove her innocence, Magdalen ignores anonymous threats to ‘leave it be’ and delves into the dangerous underworld of the city. Here again, I discovered that some things have actually changed very little over the last 400 years. Elizabethan England experienced an influx of immigrants fleeing persecution on the continent. Whilst some welcomed them with open arms, others were actively hostile to the incomers, blaming them for taking housing, jobs, and even for spreading the plague!

‘Would you be pleased to find a nation of such barbarous temper that, breaking out in hideous violence, would not afford you an abode on earth … What would you think to be thus used? This is the strangers’ case, and this your mountainish inhumanity.’

As Shakespeare’s great friend Ben Jonson famously said, Shakespeare was ‘not for an age but for all time’. 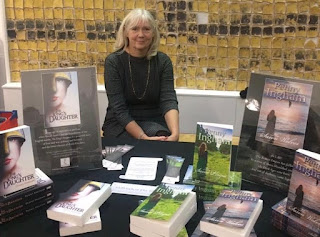 I was born and raised in Yorkshire where my father inspired my love of history from an early age. He is a born story teller and would take us to the top of Iron Age hillforts, often as dusk was falling, and regale us with stirring tales of battles lost and won. Not surprisingly, I went on to study Classics at university, and still love spending my summers on archaeological digs. For me, there is nothing more thrilling than finding an artefact that has not seen the light of day for thousands of years. I find so much inspiration for my novels from archaeology.
I have had a variety of jobs over the years, including working for the British Forces newspaper in Germany, and at the BBC. When our family was little, the only available space for me to write was a small walk-in wardrobe. The children used to say, ‘oh, mum’s in the cupboard again’.
I have written four historical novels: The King’s Daughter explores the story of Aethelflaed, the Lady of the Mercians. The Saxon Wolves and the Saxon Plague are both set in fifth century AD, a time of enormous upheaval and uncertainty in Britain as the Romans departed and the Saxon era began. My latest is something a bit different. Twelve Nights is a crime thriller set in sixteenth century London, and features William Shakespeare and Christopher Marlowe.
I now live with my husband in the Hampshire countryside. Like many others during the pandemic, we decided to try growing our own fruit and vegetables – with mixed results! We can only get better!
FACEBOOK |  INSTAGRAM  |  TWITTER  |  SITE
~~~~~~~~~~~~~~~~~~~~~~~~~~~~~~~~~
YOUR CHANCE TO WIN...
...a paperback copy of Twelve Nights!
(Open to UK Only)
*Terms and Conditions –UK entries welcome. Please enter using the Rafflecopter box below. The winner will be selected at random via Rafflecopter from all valid entries and will be notified by Twitter and/or email. If no response is received within 7 days then Rachel’s Random Resources reserves the right to select an alternative winner. Open to all entrants aged 18 or over. Any personal data given as part of the competition entry is used for this purpose only and will not be shared with third parties, with the exception of the winners’ information. This will passed to the giveaway organiser and used only for fulfilment of the prize, after which time Rachel’s Random Resources will delete the data. I am not responsible for despatch or delivery of the prize.
a Rafflecopter giveaway
~~~~~~~~~~~~~~~~~~~~~~~~~~~~~~~~~

Special thanks to Rachel at Rachel's Random Resources for the chance to bring this tour to you and to the author for the guest post. (THANKS!) For more information on this title, the author, this promotion, or those on the horizon, feel free to click through the links provided above. This title is available now, so click on over to your favorite online retailer to snag your copy today and be sure to check out the rest of the tour for more bookish fun!