Today, you're in for a trio of bookish fun STARTING RIGHT NOW! First up, we've got Rachel's Random Resources on deck with a stop along their current tour starring a story with SO MUCH HEART that you know from the first glance that it's gonna bring all the feels along the way. After the intro, KEEP READING for a special GUEST POST from author Marilyn Cohen de Villiers on that eternal debate about whether a work is fact or fiction! Ready, set, let's bring the spotlight around as our focus turns to today's title in the spotlight... 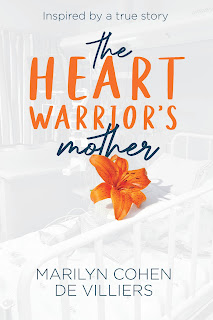 I was born and raised in Johannesburg, South Africa, the youngest daughter of an extraordinarily ordinary, happy, stable, traditional (rather than observant) Jewish family. After matriculating at Northview High School, I went to Rhodes University in Grahamstown where I served on the Student’s Representative Council (SRC), competed (badly) in synchronised swimming and completed a B. Journalism degree. This was followed by a “totally useless” – according to my parents – English Honours degree (first class), also at Rhodes.
With the dawning of the turbulent 1980s, I started my career as a reporter on a daily newspaper, working first in the news and later, the finance departments. During this period, I interviewed, among others, Frank Sinatra, Jeffrey Archer, Eugene Terre’blanche and Desmond Tutu. I caught crocodiles; avoided rocks and tear smoke canisters in various South African townships as protests and unrest against the Apartheid government intensified; stayed awake through interminable city council meetings and criminal and civil court cases – and learned to interpret balance sheets.
I also married my news editor, Poen de Villiers. Despite all the odds against us coming as we did from totally different backgrounds, we remained happily married for 32 years and three days. Poen passed away as a result of diabetes complications on 15 March, 2015.
After the birth of our two daughters, I ‘crossed over’ into Public Relations with its regular hours and predictability. My writing – articles, media releases, opinion and thought leadership pieces and so on – was published regularly in newspapers and other media, usually under someone else’s by-line. I returned to my roots as a journalist in a freelance capacity some six years ago, writing mainly business and IT articles.
So why, after a lifetime of writing non-fiction, did I decide to try my hand at fiction?
The catalyst was the unexpected death of a childhood friend and colleague in 2012. This spurred me to take stock of my life, to think about what I had achieved. A few months later, I decided to try and write a novel. This turned out to be A Beautiful Family which was published in July 2014. The fiction bug had bitten, and my second novel, When Time Fails, was launched in September 2015, followed by Deceive and Defend, in 2018. Although this was not intended when I first started writing fiction, the three novels together constitute The Silverman Saga trilogy
Unlike my earlier novels, my latest book, The Heart Warrior’s Mother, was inspired by a true story.
SITE  |  FACEBOOK
~~~~~~~~~~~~~~~~~~~~~~~~~~~~~~~

Special thanks to Rachel at Rachel's Random Resources for the chance to bring this tour to you and to the author for the guest post. (THANKS!) For more information on this title, the author, this promotion, or those on the horizon, feel free to click through the links provided above. This title is available now, so click on over to your favorite online retailer to snag your copy today and be sure to check out the rest of the tour for more bookish fun! 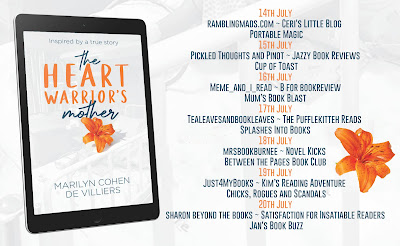