Happy Friday the 13th to you!
For those of you going about your day as usual, I applaud you.  For those hiding under their beds with their laptops reading this right now, make room for me!  I'm not overtly superstitious or anything, but it does seem that Fridays that fall on the 13th of the month tend to hold some sort of sinister energy or something...which of course led me to wonder....just where did this superstition come from?

The long and short of it is this...there are many theories out there to explain where our collective fear of a date/day came from spread through many cultures.  Whether you choose to believe in any number of them is entirely up to you.  Perhaps it is all in the mind, but then again, thoughts and beliefs can be pretty powerful stuff...which leads me right into the featured book of the day.  Today's book of choice on this supernaturally charged Friday the 13th is.... 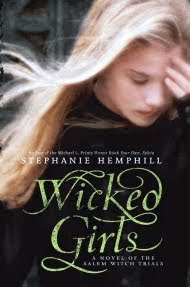 Wicked Girls:
A Novel of the Salem Witch Trials
by
Stephanie Hemphill

This is a fictionalization of the events that were historically documented so long ago in Salem.  Seven young girls and the power they wield thanks to the superstitions and beliefs of society.  The year is 1692.  Families are close, communities closer...or so they would like to think.  Religion is the central point of their lives.  As in society today, so was it back then...values and morals were taught, but not everyone chose to live by them.  One day, two young members of the congregation fall mysteriously ill.  Their bodies wracked with pain, twisting in agony.  Times beings as they were, they were thought to be under the power of dark forces, their young lives being tainted by black magic or worse...the Devil himself.  The young ladies were cared for and placed upon pedestals thus relieving them of their unknown status and replacing it with the eye of the public and a place of power.  Seeing this outcome, other young ladies seeking to escape their dreary lives and the unfortunate circumstances of their existence took to having fits as well, but with the addition of one thing....sight. 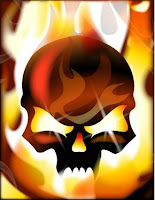 The sight enabled them to see those that would cause them harm spiritually and thus expose them to the masses.  A good thing in a time of need and purging, right?  I mean, they wouldn't want evil to live among them in their peaceful little towns.  The problem comes in when the innocent can not be separated from evil, nor fact from fiction.  It is true that many of the accused are guilty in one way or another, but of witchcraft...that's a much harder charge to prove.  Are the girls really seeing the ministrations of darkness at work or merely carrying out revenge on behalf of those that can not?  Oh the wicked webs we weave....each day that passes they become harder and harder to break free from, and the girls are about to learn just how sticky they can get. 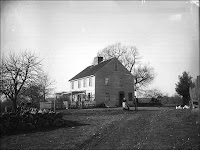 This was one of my first YA reads where the book was written in prose.  I have to say....I'm not a huge fan of the style...but it worked well enough for this tale.  The fiction aspect is used to fill in the blanks so to speak on the daily lives and seemingly insignificant happenings of the girls, though as you read, you begin to understand that everything they did had a greater meaning than at first glance especially when dealing with (and surprisingly as well) young Ann Putnam, Jr.  She is a feisty young girl to say the least and when things start to go awry, you'd better hope you are in her good graces.  Mercy Lewis, a servant in their household, falls under the spell of young Ann and eventually succumbs to not only acting out as the other girls, but eventually becoming their makeshift leader.  Margaret Walcott remains herself throughout the events, selfish, full of jealousy, and seeking the constant attention of one boy by the name of Issac, though he actually be quite the scoundrel himself.  The other girls fade in and out of the inner circle, but always keep in line lest an accident befall them.

What starts out as child's play for these girls, quickly develops into something much bigger then themselves...something of which in time, most of them wish they never had a hand in.  It seems to me that their actions were merely a way by which they themselves and the adults in their lives could extract revenge upon those in society that had slighted them.  There are some that did truly deserve to pay for their wrong doings, but not all.  The lives of both guilty and innocent stain their hands red.  For all their actions and finger pointing, they may as well have hung those accused and convicted themselves.

For me though, the characters were a tad hard to connect with on an individual level; something I've read the author struggled with during the editing process.  Though I had no trouble following the story, I found myself glancing back several times to the titled section I was reading to see which young lady was speaking thus.  There is actually a positive aspect to this observation however.  Even though it presented a struggle when trying to hear each voice separately, it worked in a way since the girls intended to move as a group. All of there actions were to be coordinated so as to keep the most power between them and avoid skepticism, so in a way this fused voice worked for the story.

I must give the author a great many thanks for including the real stories in brief of each main character and those accused upon reaching the books end. It provides for a delightfully unexpected romp through a history that is still so much alive in our minds today.  There is even a list of sources used by the author in creating this work so that you, the reader, can investigate things further to satisfy your curiosity.  A good read for those in favor of the poetic style as well as those bewitched (pardon the pun) with the magical history from our own shores.  There's something here for history buffs as well as paranormal fiction fans. 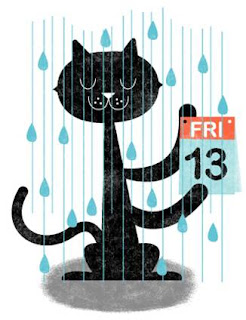 Review copy received courtesy of Kim at HarperCollins Children's Books.  (THANKS!)  For more information on this title and their full catalog, visit their website or follow along on Twitter.

COMMENT CREATOR
Riddle me this...on this Friday the 13th, curious minds want to know, what's your take on the superstitious side of the day?  Do you believe that bad things tend to happen more?  Or are you with the crowd that thinks it's just the same as any other day?  Do tell!

I blame my fear entirely on the movie Friday the 13th. I watched it waaaaay too young. :)

Michelle: Oh...you poor thing! ^_^ I wasn't really allowed to watch scary movies as a kid but doubt I would have faired much better. Nowadays they can be predictable at times, but ya gotta love 'em... ^_^

I haven't been able to find a prose novel that I really, really liked yet. This book does sound good though.

As for Friday the 13th, nothing bad happened to me! It was a bit of a long day. I try to stay away from superstition or else I'll freak myself out.

Melanie: Yeah..I'm not certain on this style overall, but thus far, not my preference. LOL on the Friday the 13th bit...glad you played it safe. ^_^