The Princess Games by Danai Kadzere

Hi guys!
Welcome back to another week here at Satisfaction for Insatiable Readers.

Can you believe it?  Christmas is almost here!  Only 4 more sleeps to go and the big DAY is upon us.  Here's hoping all of you that celebrate are well on your way to being fully prepared.  As for me, I've still got to wrap...yep.  Ugh.  Use to love it and if I had the time, I still would but it's a past tense sort of love at this point with the busyness this year.  No worries, it'll get done.  Anywho, back to the books!

Today, we're shining the spotlight on a title I had all intentions of featuring LAST month, but again with the busy talk, one thing led to another and it fell to the wayside.  Trust me when I say though, it wasn't for lack of interest or story quality because really, I had an AWESOME time!  Ready to read all about it?  Here we GO!  Today's ebook of choice is... 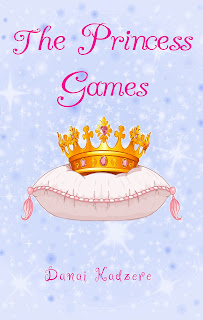 About the book....
King Winkle and Queen Periwinkle have a problem. They need a princess, and they need her fast. With the upcoming peace-keeping marriage between Prince Linus of Branninia and the princess of the fair Kingdom of Hoggenbottom, it's a bit risky to admit they don't have a princess.

Instead, they decide to host The Princess Games. Soon enough, the fairest maidens of the land are gathered in front of the castle, fairy-godmothers in tow! With a goofy king, an obsessive compulsive advisor, and a fairy godmother whose spells do whatever they want, these games are about to get interesting.
Even if Emma and her clumsy Fairy Louise can manage to do well in the competition, she'll have to get past the expert spells of Fairy Faye and the beauty of Laralyn, who is intent on pleasing her ambitious mother at any cost.

Prepare to enter the realm of Middle Grade magic as we take part in a series of games unlike any other, the end result being the selection of ...the next princess?

Yes, you did indeed read that correctly.  The next princess wasn't being born from the royal family but brought in by them.  In truth, I wasn't sure what to expect.  The synopsis sounded fine and dandy, but I've been mislead before...such is NOT the case here!  The easiest way to describe it is like a toned down version of The Hunger Games...same in life changing outcome after participation, minus the impending death (though some do end up a bit crisp) and starvation for their village if they lose, plus lovely wardrobe changes and fairy godmothers for all.  These games aren't combat riddled, but some might as well be with the intensity that the girls and their fairies participate.  It's quite literally let the best snoot win if the girls alone have their way....good thing they don't.

Our two stars per se are Emma and Laralyn and though they come from the same village, they couldn't possibly be any more different.  Emma is so spunky and sure of herself.  One of so many odd daughters living in less than desirable conditions but better than some, she was sent not with hope imbued in her to actually win but to stay as long as she can to aid the family in extending the small harvest this year.  Sad, huh?  It's not to say they didn't love her, or believe in her, but the most they were willing to hope for was one less mouth to feed for a short time...what they end up with is something entirely different.  Laralyn on the other hand is much more a product of what her mother wants her to be than who she truly is.  It just goes to show you that a pretty face and all the yes-and-no-sirs in the world won't necessarily make you a shoe in for first place.  By book's end, both girls will have their eyes opened regarding many things but perhaps the biggest of them all is that things are not always what they seem and that goodness lies in us all if we only CHOOSE it. 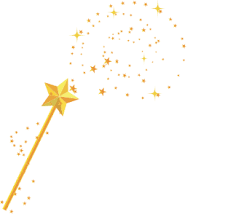 Overall, a LOT of fun with a pinch of magic and danger to balance things out.  Oh, that magic mentioned?  It comes mostly in the form of the fairy godmothers and let me tell you, they are a hoot!  One is so prim and proper, while the other is rather unorthodox, but you know what?  BOTH work...though the latter might pull in favor seeing how it's not every day that a kingdom holds "games" to find their princess...and trust me the one they find will be one of a kind (or should I say two?  You have been teased.... ^-^). It's so much more than potential princesses finding a crown or hand in marriage.  It's about having faith in yourself, courage to follow your instincts, and above all, love.  Recommended read for Middle Grade fans of all ages.

Special thanks to author Danai Kadzere for the ebook for review.  (THANKS!)   For more information on this title, or author, feel free to click through the links provided above.  Wouldn't you know?  This title is available now in eBook and tree book formats so you can easily purchase a copy in time for the gift giving holiday or present a crafty IOU and deliver the in-hand-edition afterwards. Just sayin'....

I must admit reading the synopsis I wasn't overly impressed. That is until I came to the bit about the characters - an obsessive compulsive advisor, I'm loving the sound of this.

Great review, this sounds like such a fun read.