BLOG TOUR: The Truth About Goodbye by Russell Ricard

Well, I don't know about you, but it's been a BUSY week both book and work wise.  So much so in fact that I took yesterday off...well, it was a regular day off work but a break on the blog.  No worries, there was reading, just no blogging...but we're back at it again today with a stop over from a familiar team.

Today's title came to my attention via TLC Book Tours and stars the work of a debut novelist itching to make his way onto your bookshelf.  Will it happen?  That all depends on you, but here comes a peek into my adventure through the pages.  Ready or not, here comes today's book of choice... 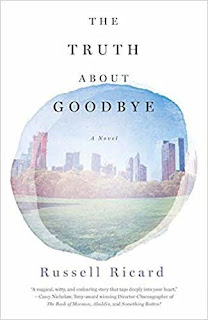 About the book....
Sebastian Hart has dealt with a lifetime of goodbyes. And now, a year after his husband Frank’s death, the forty-year-old chorus boy still blames himself. After all, Sebastian started the argument that night over one of Frank’s former date items, someone younger than Sebastian who still wanted Frank.

Challenged by his best friend, the quirky ex-Rockettes dancer Chloe, Sebastian struggles toward his dream of becoming a choreographer and grapples with romantic feelings for Reid, a new student in his tap class.

Ultimately, Sebastian begins to wonder whether it’s his imagination, or not, that Frank’s ghost is here, warning him that he daren’t move on with another love. He questions the truth: Is death really the final goodbye?

So, here's the deal...
The author writes what he knows (not a bad thing) which really puts you right there in the head space of the character.  You can feel the anxiety, angst, and heartbreak that runs a mile a minute through Sebastian.  He's had a great loss, after all, and while Arthur is a fuzzy miracle worker (cats, gotta love 'em!) and Chloe a doctor in her own right (though I wouldn't actually take her "prescriptions"...just sayin'), on their own, they are just two pieces of the bigger puzzle called his LIFE that he needs to pull things together, whether he knows it or not.  Bring on the journey of self-discovery with enough setbacks to bring anyone to ground zero!  Yes, my friends...it's definitely a case of "darker before the dawn"....BUT, the follow up number certainly serves to dazzle.  It's a twinkle toe step through a proverbial field of tulips once a peace is reached within his restless soul, allowing the past to settle in the past, and the future to shine its rays of potential on those dreams left to die.

In the end, I was pleased with the journey and found the voices authentic to what I envisioned for a few slightly jaded New Yorkers still seeking their HEAs after the last curtain call.  For those curious but not asking, it offers an alternative relationship to those normally showcased (i.e. male and male), but for the doubly curious, it matters not.  It's a story of love, loss, and life after it all...and who can't relate to that? 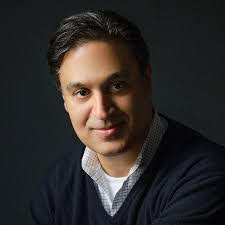 Russell Ricard is a veteran musical theater performer who s appeared in regional, national, and international productions and on Broadway. He received his MFA in creative writing from The New School. The Truth About Goodbye is his debut novel. He lives in Forest Hills, NY, with his husband, cat, and a lovingly supportive stand-up desk named Ruth

Special thanks to Lisa at TLC Book Tours, author Russell Ricard, and the Wise Ink team, for the copy for review as well as the chance to bring this tour to you.  (THANKS!)  For more information on this title, the author, the publisher, THIS TOUR, as well as those on the horizon, feel free to click through the links provided above.  Be sure to check out the rest of the stops on the tour for more reviews, posts, and chances to win!