Mirabelle Harbor: You Give Love a Bad Name by Marilyn Brant

Today, we're taking a trip back to Mirabelle Harbor with one of my favorite authors, Marilyn Brant!  It's a series, yes (or rather, YEEEESSSS, with the mandatory fist pump action of awesomeness), but they can be read as standalone titles.  How do I know?  From my own experience, of course!  Let's see, I've read books 1, 5, and now 3, in that very order, and though it's definitely a case for the more the merrier, they worked just fine.  Anywho, getting back on topic...

Our armchair journey started out as my Friday read pick and ended up as my late night-couldn't-put-it-down-until-the-final-epage-was-turned companion.  That's right, it didn't survive the night but could you really blame me?  Well, I guess you could seeing how I haven't actually told you anything about it yet, but trust me, you won't hold it against me when all is said and done.  Ladies and gents, get your wish lists ready because today's title is on deck... 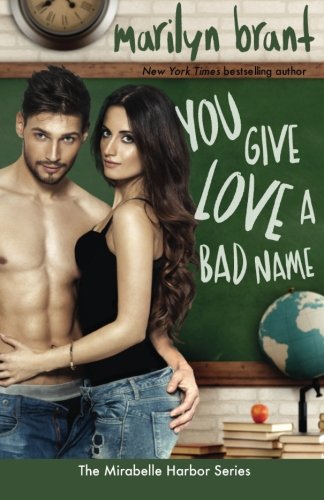 About the book...
"Nothing but love, 24/7" is the slogan of Mirabelle Harbor's only radio station, 102.5 "LOVE" FM. On the verge of turning thirty-five, local DJ Blake Michaelsen is well-known for several reasons: his very sexy on-air voice, his omnipresent family, his eligible bachelor status, and his reputation as one of the most impulsive men in Chicago's northern suburbs.

High-school French teacher and lifelong romantic Vicky Bernier is not at all wild about people who exhibit reckless conduct. (Blake.) Or men who have gigantic egos. (Blake.) Or grownups who still act like teenagers. (Blake, again.) She deals with enough adolescent behavior during the school day. Unfortunately, she's the staff advisor to the Homecoming Committee, and they've chosen him as their DJ for the big fall dance.

What happens when a man whose job it is to play love songs for a living is forced to admit his deepest secret-that he doesn't believe in true love-only to discover that the one woman who might capture his heart is the same woman who distrusts him the most?

No matter what you call it, with love there's an exception to every rule.

She's hopeless romantic, teaching the younger generation one of the "love" languages, and holding out for her own Mr. Darcy.  He's got a voice most women melt for, spins the sounds of love for a living, but isn't so much a believer in Mr./Mrs. Right...more so of "right now".  What happens when their two divergent paths meet at a crossroads neither saw coming?  A most unexpected outcome, that's for certain, but one that'll leave them both as believers, one way or another...

Okay, so, I was more cryptic than I intended, but I don't want to spoil it for you!  It's definitely a read to experience first hand (as are the rest of this author's works), and there's nothing worse than having it ruined for you.  Still, this is a review, so I'll endeavor to impart a few thoughts from my own experience without over sharing.  Deal?  Here goes...

...Blake, Blake, Blake, Blake, BLAKE!
Despite that oh-so-hot exterior complete with "I'm-too-mistrusting-of-love-to-tame" air of indifference, I saw your marshmallow center.  The moments of terror you were put through punched holes in your never-growing-up exterior and we SAW YOU for who you really are, or could be if you owned it.  Grant it, there was a short span of time that I really wanted to punch you in the face.  No, it wasn't for the bantering, or the innuendos, it was when you were acting like a total girl even when you got what you wanted.  Yes, I said it.  You were acting like a girl and I say that with the utmost respect for my gender.  After you manned up (or is it better put as OWNED UP to what was really happening), we were square once again and on our way to bliss-ville...and what a trip it turned out to be!

...let's talk about you, Vicky Bernier!
I definitely think we would have been friends had I lived in your (technically fictitious) town.  Your love of animals, ability to hold your tongue despite needling from not-so-grown men, and desire to hold out for a relationship in lieu of a one night stand are all totally respectable traits.  Do I hold it against you that on one particular point, you conceded?  Nope.  In fact, I'm giving you a high five because of it.  It was on YOUR terms.  YOU made the decision.  You weren't coerced into it, or so caught up in the moment that your head was simply turned.  You made a conscious decision and hey, who could blame you?  The fact that it may have backfired in unexpected ways, well now...how could you have POSSIBLY known THAT would happen?  I mean, I know I didn't expect it...and I don't really think THEY did either, know what I mean?

In the end, their eventual togetherness (though for the moment or forever, who could say?) made a great weekend (or night...definitely night) read.  It's filled with wonderful characters (including a particularly brilliant bartender! ^-^), matters of the heart, window steaming action (though more blush versus full on play by play ....thank you very much!), and a totally awesome (sorry, had to work my 80's in there somewhere...you'll get it when you read it) ending you won't want to miss.  Bookmarks up for Marilyn Brant on another fabulous read fit for her fans, as well as those of Contemporary Romance in general.

Marilyn Brant has been told she writes with honesty, liveliness and wit (descriptors she’s grown terribly fond of) about complex, intelligent women — like her friends — and their significant personal relationships. Although her favorite pursuits undoubtedly involve books, she proves she’s not just a literary snob by confessing her lifelong fascination (read: obsession) with popular music, especially from the ’70s & ’80s, most flavors of ice cream, and a variety of sensuous body lotions/oils. Her family believes she’s lost unquantifiable hours to the allure of “Tasty” videos on Facebook, but she refuses to substantiate this claim.

Special thanks to author Marilyn Brant for the ebook for review.  (THANK YOU!) For more information on this title, the author, or her growing body of works, feel free to click through the links provided above.  This title is available now in "tree" and "e", so be on the lookout for it on a bookstore shelf or virtual retailer of your choosing.

Loving the image of you, sitting on your settee, all excited waiting for the arrival of one of these books. Alas a series that doesn't appeal to me. I'm gad you are finding so much pleasure in them.

Gina,
Your reviews are always like gold to me because you read so widely and write so thoughtfully about the stories you're reviewing. That I've been lucky enough to be one of the authors you've read & reviewed multiple times is a point of great pride for me...thank you! I'm so honored you chose to spend your Friday night with my characters and truly grateful that you enjoyed their romance. Blake & Vicky say "merci" and I do, too :) . xox