Today, we're joining RABT Book Tours as we SPOTLIGHT a new-ish Middle Grade title throughout the blogosphere.  It's got whimsy, it's got wishes, it's got lessons to be learned, and fun to be had.  What more could you want?  Oh...the title.  Well, that WOULD be a great place to start.  *ahem*  Ladies and gents, please allow me to introduce today's title in the spotlight... 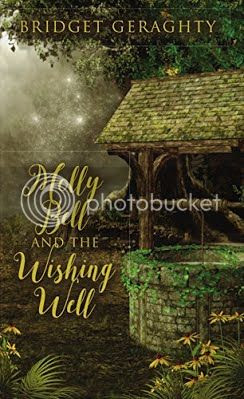 Molly Bell is an eleven-year old girl who used to be a whimsical, sporty type of a child with a zest for living. All that has been turned upside down by the untimely death of her cherished mother two years ago. To make matters worse, her father is getting remarried to a high-maintenance beauty that Molly seemingly has nothing in common with, and she comes with an annoying six-year old son, Henry, who finds a way to wreck everything in his path.


Molly can't find anything about her new circumstances to be excited about, until her Aunt Joan tells her about the wishing well at Molly's grandparents' farm. According to Aunt Joan, every wish she ever made there came true. And it just so happens that Molly and Henry will be staying at the farm for a week while their parents are on their honeymoon. Molly is convinced if she could just find that wishing well, she could wish for her mom to come back to life and everything will be okay again.

But Molly is in for a few surprises, and more that a few hard lessons about being careful what you wish for when the consequences of Molly's selfish desires wreak havoc on her entire family. Can Molly make things right again through the wishing well? Or will she need to find it within herself to bring back the joy in her life that has been missing all this time?

Bridget Geraghty lives in northern Illinois with her husband and three children.  She taught elementary school for eight years before focusing on writing.  It is her sincere hope that her stories inspire and uplift the minds and spirits of her young readers.

Special thanks to the RABT Book Tours team for the chance to bring this promotion to you.  (THANKS!)  For more information on this title, the author, or those tours on the horizon, feel free to click through the links provided above. This title is available now, so click over to your favorite online retailer to pick up a copy today.