Today, I'm more than excited (we're talking fangirl levels here!) to be playing host to a stop along the Penguin Young Readers blog tour starring the latest (dare I say, greatest?  Oh yeah...I DARE!) addition to the Hamster Princess series from author/illustrator Ursula Vernon.  I fell in love with the author's work once upon a time when I was working at a local bookstore.  It was Dragonbreath that brought me in (if you've not indulged in reading it, you seriously should), but I'm totally sticking around for Harriett, aka the Hamster Princess.  Ready or not, fair readers, here comes today's book of choice and blog tour guest, fresh off the beanstalk.... 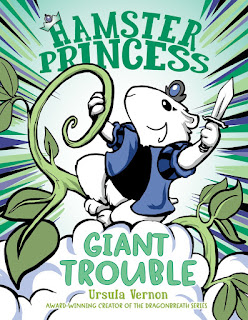 About the book...
A magical beanstalk leads to a GIANT surprise in book four of Ursula Vernon's critically acclaimed Hamster Princess series.
Harriet Hamsterbone doesn't go looking for trouble. Somehow it always finds her. So she isn't completely shocked when a salesman attempts to sell her some magic beans, or when one of those beans grows into a towering beanstalk leading up into the clouds. But even Harriet is surprised to find a giant castle--complete with one very poetically challenged giant-- at the top of it. And she certainly never thought she would make a new friend named Strings who is half harp, half hamster. But Strings isn't the giant's guest--she and a rather large goose are his prisoners! This calls for a heroic rescue, and Harriet is just the hamster for the job.


From the first release to this the fourth, Harriett has been a HOOT!  The stories are adventure filled with danger around many corners as she tackles fairy tale after fairy tale of evil intent...all aimed at her at some point or another.  Good thing she's got the bravery thing down pat and it doesn't hurt that she kept the GOOD part of her initial curse.  Don't know what I'm talking about?  Well then, you've got some catching up to do.  ^-^  Anyway... 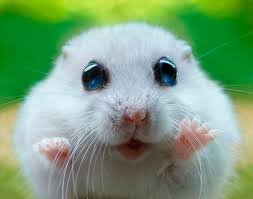 So, here we are facing the worst enemy yet...a pushy salesman.
AAAAAHHHHHHH!
No, really!  He's selling magic beans and we all know what THOSE lead to...and Harriett is too smart to even think of accepting that offer, but what to do when your trusty battle quail gets his beak into things.  Yeeeaahhh...better get a really sharp axe or prepare to climb because this puppy isn't coming down on its own, but that doesn't mean something else won't....dun dun dunn...

Seriously guys, this book rocked!
Harriett was at her hamster best, swinging into action, taking charge, laughing in the face of danger...okay, quietly at first because really, if you don't have to wake a giant, you don't want to wake a giant.  The new friends she makes are right in tune (HA!  Inside joke!) with her, the appearance of old friends was a genuine surprise but so well timed, and the dangers slayed carefully enough for the intended audience leaving us with a spectacular ending...well, for now anyway.

So, if I haven't gotten the point across yet, I LOVE THIS SERIES and this release is no exception. The author practices her craft to near perfection, giving us not just another bookish entertainment option, but a heroine to count on when times get tough. 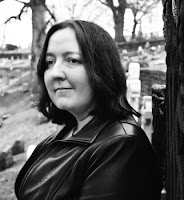 Ursula Vernon is a full-time author and illustrator whose work has won a Hugo award and been nominated for an Eisner. She loves birding, gardening, and spunky heroines, and thinks she would make a terrible princess. Ursula lives with her husband in Pittsboro, North Carolina.

Special thanks to Chelsea at Penguin Young Readers for the copy for review as well as the chance to bring this tour to you.  (THANK YOU!)  For more information on this title, the series, the author, or the publisher, feel free to click through the links provided above.  This title is available now via Penguin Young Readers, so be on the lookout for it on a bookstore shelf or virtual retailer of your choosing.

For more Hamster Princess fun, be sure to check out the rest of the tour!

Enter for a chance to be one (1) grand prize winner and receive a set of Hamster Princess books, including Harriet the Invincible, Of Mice and Magic, Ratpunzel, and Giant Trouble (ARV: $51.96), or to be one (1) of five (5) second place winners to receive Hamster Princess: Harriet the Invincible (ARC: $12.99 each).
NO PURCHASE NECESSARY. Enter between 12:00 AM Eastern Time on May 8, 2017 and 12:00 AM on May 15, 2017.  Open to residents of the fifty United States and the District of Columbia who are 13 and older. Winners will be selected at random on or about May 18, 2017. Odds of winning depend on number of eligible entries received. Void where prohibited or restricted by law.

I am going to love reading these books. I have always had a hamster and will enjoy reading about this hamster princess who looks tough and smart.