Today, we're celebrating the BOOK BIRTHDAY of author Ann Marie Frohoff's, Heavy Influence:  The Complete Series.  It's a combination Romance, Young Adult, New Adult, rock star story, that follows the ups, downs, and in-betweens of two star crossed, love hungry teens that seem to bring out the best AND the worst in each other.  Curious?  Well then, far be it from me to leave you waiting.  Ladies and gents, put your hands together for today's book birthday title in the spotlight... 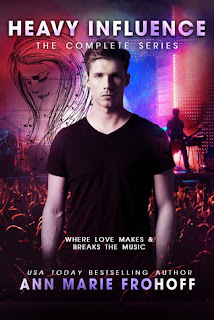 About the book...
The complete, highly-rated, six book Heavy Influence Series. Where love makes and breaks the music. Heavy Influence takes you on a heart thumping journey through the trials and tribulations of a rising rockstar who reaches unimaginable fame, yet the only thing his heart desires is having the love of his life by his side. From angsty teenagers and forbidden love to lusty twenty-somethings, Jake & Alyssa will endure more than love and loss. Their happily-ever-after will bring more than bargained for.

First things first, this is a hella long ebook (I mean, it DOES include 6 books of varying lengths, so long makes sense), so if you're not in it for the long haul, break it up and let your eyeballs have a sec to relax.  Second, it's shelved as a Romance, which it is (however obtuse at times), but it would easily fit with older Young Adult titles or the New Adult category.  Third, a brief glimpse...girl next door meet boy next door, seemingly for the first time, or at least for the first time when hormones have kicked in.  They've known each other forever, but only known as in friends...now there are sparks that they aren't quite sure what to do with.  She's a high school freshman, he's a senior-turned-rock-star-in-the-making, and together they could be explosive...or simply spontaneously combust from more than just physical desire.  Trust me, when the phrase "sometimes love just isn't enough" pops up, you can't but wonder if they just might be right.  Anywho, let's break this sucker down into more digestible pieces....

SKID OUT - #0.5 - A pretty good start to the series...we get to know Aly and Jake from their own points of view as well as each others, while catching a glimpse of what might be around the corner. Think girl/guy next door, life long friendship taking a turn for something more...and some rock n roll.

FIRST KISS - #1 - So, much more growing up happens in this first full length book of the series. From young love to beyond full on jealousy, unrequited crushes to misconstrued actions, broken hearts to broken faces, and yet the spark ignited still lingers. Even when they've both hit rock bottom in their own ways, even when everyone else is against them, scheming, lying, and what not...love still remains.  But is it worth it?

FEVER PITCH - #1.5 - So, Aly and Jake have reunited (sorta) with no awkwardness (kinda) and a happily-ever-after looming on the horizon (ugh...rain check?). This story is full on Aly's point of view and we can see how she's thought things out, but is letting love truly be blind. Not sure about Jake at this point; seems to have really fallen into the trappings of rockstardom, despite his moments of sweetness. Definitely a wait and see game, no matter who you're rooting for...

BROKEN NOTES - #2 - Aly and Jake have done a lot of growing up this time around as time marches forward waiting for no man or woman, but some things never change, like this caustic thing their relationship has turned into. Way too much drama even for rock stars...though my heart did stumble over Dump's story arc.

HIGHER OCTAVE - #2.5 - So, we've flashed forward...Jake is clean again, going solo, interested somewhat in a woman, but still determined to win Aly back. Aly is moving forward with Nathan, graduating college, and still tempted by Jake but seemingly not as much as he might be. Past sh*t is about to hit the fan and the mysterious Mr Todd makes an appearance.  Think the lady from Devil Wears Prada with possible mob connections...

LOVE AMPLIFIED - #3 - The drama rolls on with a surprise thanks Sienna, a lady friend of interest for Jake, a potential marriage to someone other than Jake for Aly...and an ending tied up with them all in the tangle. It's been quite a ride and the final scenes leave us with just as much feedback as the rest of the rocking and rolling tale...

Overall, it was a roller coaster ride that didn't let a moment slip by as we followed Jake and Aly from pubescent meetings to full on affairs.  Seriously, it's pretty much EIGHT YEARS covered in six books, leaving you no doubt as to what these two were or weren't up to.  Though I've discovered I'm only a binge reader in certain cases (not this one, eek!), it doesn't mean you aren't,....or that you wouldn't actually put a virtual bookmark in it to sample other worlds inbetween...and so, I say if you're a fan of Young Adult, New Adult, or just blame rock star romance, CHECK OUT THE HEAVY INFLUENCE SERIES for your next pick! 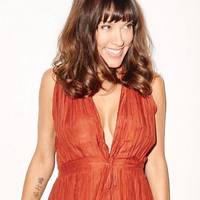 Ann Marie ("Annie") Frohoff grew up in sunny Southern California. As a teen and young adult she spent her time frequenting and living in nearly every beachside city up and down the coast. She settled in Hollywood at 19 working in film and TV. Soon her itch to keep moving took over again, taking her to Hawaii for a time and then back to LA. She’s now settled in the South Bay area of Los Angeles with her family. Her wanderlust and propensity to live life out loud has brought her many life experiences she shares through her character(s).

Annie has now also delved into the supernatural fantasy world drawing inspiration from song lyrics, friends and travel; building realms of vastly complex characters and plot lines; weaving history, fantasy and heavy doses of romance together. You will be kept turning the pages of “The Zodiac Wars" and “Precious Metal: The Prince and the Gypsy” book series in the future. Both series of books are currently in development, along with other one-off titles.

Special thanks to author Ann Marie Frohoff for the ebook for review.  (THANKS!)  For more information on this series, the author, or her other works, feel free to click through the links provided above.  This set is available now, so click on over to your favorite online retailer to snag your copy today!

Until next time, remember...if it looks good READ IT!