Today, we're joining TLC Book Tours for a promotion already in progress starring a work of Historical Fiction via Thomas Nelson.  It's the first in a new series (which was a total shocker to me because somehow I missed that tidbit...curious to see how it connects to the next) from a new-to-me author and in all honesty, I fell in love with the cover at first glance.  Seriously, it's SO PRETTY and the story within, well that's not to shabby either.  Ready or not, here comes today's title in the spotlight... 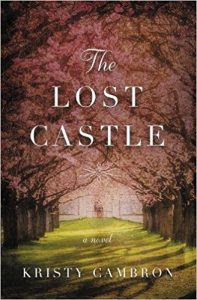 About the book...
Launching a brand-new series, Kristy Cambron explores the collision of past and present as she discovers the ruins of a French castle, long lost to history.

A thirteenth century castle, Chateau de Doux Reves, has been forgotten for generations, left to ruin in a storybook forest nestled deep in France's picturesque Loire Valley. It survived a sacking in the French Revolution, was brought back to life and fashioned into a storybook chateau in the Gilded Age, and was eventually felled and deserted after a disastrous fire in the 1930s.

As Ellie Carver sits by her grandmother's bedside, she hears stories of a castle . . . of lost love and a hidden chapel that played host to a secret fight in the World War II French resistance. But her grandmother is quickly slipping into the locked-down world of Alzheimer's, and Ellie must act fast if she wants to uncover the truth of her family's history.

Sparked by the discovery of a long forgotten family heirloom, Ellie embarks on a journey to French wine country to uncover the mystery surrounding The Sleeping Beauty--the castle so named for Charles Perrault's beloved fairy tale--and unearth its secrets before they're finally silenced by time.

Set in three different time periods--the French Revolution, World War II, and present day--The Lost Castle is a story of loves won and lost, of battles waged, and an enchanted castle that inspired the epic fairy tales time left behind.

This is the story of how one woman found more than she ventured out to discover about her family, her history, and herself.

Ellie was a determined young woman set on delivering some semblance of peace to her ailing grandmother, while taking the first step on a journey she never knew was intended for her.  The places she sees, the people she meets, the connections she makes, all create a spectacular backdrop for a story that will steal your heart.  The long forgotten castle adds a certain air of mystery.  The family working the surrounding lands brings a palpable heart to the seemingly silenced emotional landscape.  The forbidden nature of it all creates the challenge from which Ellie will not back down from, eventually granting her more than simply access, but a kinship of sorts with all that's transpired.  It was wonderful following the ladies, both past and present, down the roads of their fated futures, and seeing the strength of character they possessed in times that were more than earthshattering, but heart quaking.

For me, the hardest part was keeping the stories straight.  Don't get me wrong, each stands on its own two feet with its own feisty (if unexpected) heroine (of a sort) and a remarkable tale to tell that ends up connecting throughout the span of lifetimes, but in the moment, things would get a bit fuzzy. We kept bouncing back to the past and journeying through a memory of its own past, then would flit back to the future, or at least its own future, only to wind up in another era all together.  It left my head a wee bit woozy from time to time.  Eventually though, things fell into place and the day progression in each timeline was forward marching, allowing this reader at least an easier time of keeping the past with the past, the present with the present, and the future just on the horizon.

In the end, it was a grand adventure with spectacular views, a magnanimous leading lady no matter the time period she may be in, and journey of the heart you won't soon forget.  Take a chance on waking this sleeping beauty and get whisked away by all the stories she can tell... 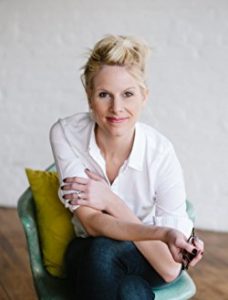 Kristy Cambron has a background in art and design, but she fancies life as a vintage-inspired storyteller. She is the bestselling author of The Ringmaster’s Wife, named to Publishers Weekly Spring 2016 Religion & Spirituality TOP 10. Her novels have been named to Library Journal Reviews’ Best Books and RT Book Reviewers’ Choice Awards Best lists for 2014 & 2015, and received 2015 & 2017 INSPY Award nominations. Kristy’s first Bible studies, THE VERSE MAPPING SERIES, will release in 2018.

Kristy holds a degree in Art History/Research Writing, and has 15 years of experience in education and leadership development from a Fortune-100 Corporation. Kristy lives in Indiana with her husband and three sons, and could probably be bribed with a coconut mocha latte and a good read.

Special thanks to Lisa at TLC Book Tours for the chance to bring this tour to you as well as the Thomas Nelson team for the ARC for review.  (THANKS!)  For more information on this title, the author, the coming series, THIS TOUR, or those on the horizon, feel free to click through the links provided above.  This title is available now, so be on the lookout for it on a bookstore shelf or virtual retailer of your choosing.

BEFORE YOU GO...
DON'T MISS YOUR CHANCE TO WIN A COPY OF THE BOOK AND A SIGNED TOTE OVER ON INSTAGRAM!

Wow, there is SO MUCH in this book that sounds awesome to me! I'm so glad you enjoyed it.