Do You Remember the Time...: My Name is Memory by Ann Brashares

Hi there!
Welcome back to Satisfaction for Insatiable Readers!  I hope your holiday weekend went well and that you enjoyed your time with family and friends (or a even a good book, they count too).  My time was spent reading (of course), doing a little bit of work (someone's gotta do it), grilling (our typical activity for this past holiday), and taking in a movie or two (or three actually).  Managed to see The Bounty Hunter (lots of fun), Sex and the City 2 (don't get me wrong, much love to the gang and all, but the story seemed a bit lacking...still, enjoyed it though), and we even rented The Stepfather (yeah...definitely makes you think what you REALLY know about a person...~shivers~).

Today...it's back to the "grindstone" so to speak so it was all about playing catch up but I did manage to get a few books read (in full)over the weekend....today's post included.  This one comes to us from an author you may have heard of (okay, more than likely HAVE heard of) but in a genre that differs from her infamous series.  Today's book of choice is.... 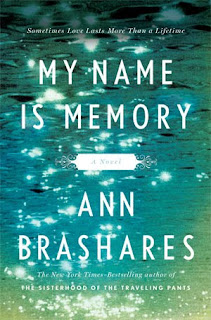 My Name is Memory
by
Ann Brashares

This is the story of a love to last the ages through every lifetime kept alive in the surviving soul of one that remembers....always.  Daniel has always been Daniel....or rather, he's been given many other names but chooses to hold on to some semblance of himself by keeping the name that brought him one step closer to the love of his life, Sophia.  Once upon a time (though that sounds like a fairytale opening and this is pretty far from a fairytale), many lifetimes ago, Daniel and Sophia met for the very first time.  You see, he had a brother by the name of Joaquim whose tendencies were of the violent and possessive sort.  They were so extreme that even his family would breathe a sigh of relief when he left on long journeys or ventured into war.  Upon receiving word that he would be returning home one night with his new wife, preparations were made to make the "happy" couple feel welcome.  They say love changes a man (or woman....but here we're focusing on the bad news brother)....in this case, I wish that were true.

Married bliss seems to escape the grasp of this tortured (or torturing) soul and unfortunately it also eludes his new bride.  Sophia is a sight for sore eyes....namely Daniel's eyes.  He is immediately enraptured with her beauty and spirit yet unwilling to step over the sacred boundaries set by marriage...that is until he hears her suffering at the hand of his brother late that night.  In an attempt to set things right, he intrudes upon their intimate "disagreement" in the hopes of sparing her bodily harm....no such luck.  As a last resort, Daniel whisks Sophia away to destinations unknown (at the time) in hopes of hiding her until his brother's impassioned rage passes and they can seek a more permanent end.  Unfortunately, that "end" reaches Daniel before he is able to make it back to her...at least in this lifetime. 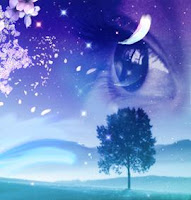 Imagine being born, living, dying, and then starting all over again with the knowledge you had already acquired.  It sounds like a dream since you'd have all these years of experience under your belt, but at the same time your here and now does not contain that same "you" that once existed.  That is the dilemma Daniel is faced with.  Here he is with a lifetime, no...many lifetimes of memories, with the love of his life(times) in reach yet he is unable to approach her as he is since her memory does not reach as far back...or does it?  Many things can be worked on so to speak within the human body, why not also the mind?  That would certainly explain the strange dreams she has been having as of late.  Dreams that tell of a secret message left behind many lifetimes ago....one that only she can unlock as she was the one that left it behind.  Will Sophia be able to surface long enough for the present day Lucy to find the answers she needs before it's too late?  Or will history be forced to repeat itself yet again for this ill-fated pair?  Only time will tell....and that is the one thing that seems to be running out this time around. 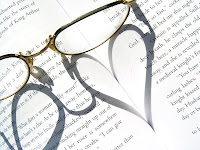 Mesmerizing, enchanting....two of many words that can be used to describe this moving tale.  You can't help but fall into step with the characters the author has created.  Daniel is such a trusting soul even when experience would show he should be otherwise.  He never gives up even if it may seem as though to do so would be wiser.  His love for Sophia is so pure that merely the thought of one day being in her life in any capacity is enough to keep his soul searching for hers throughout each life.  Sophia, or Lucy as she is known present day, comes to terms with the situations she faces with surprising strength and yet does not heed the warnings her inner voice keeps repeating (well....love IS blind after all...).  Joaquim is just too evil and vindictive to mention for very long, while Ben, another gifted with memory, is both teacher (to Daniel as he has been around even longer than him) and comic relief (once trying to seduce Daniel when he, Ben,  comes back as a woman).  It's certainly a cast with those to root for and against.

Writing wise, I enjoyed the fact that while the story does leap from past to present and back again, it does so in individual chapters and in a different font making it easier to follow.  Never once did I question if they were in present times or telling of a past life....definitely a plus when reading this type of novel.  Now, the story line here speaks straight to your heart.  While the beginning is somewhat slower as you are trying to understand the concept of Daniel and his exceptional memory, by mid-book you are gathering downhill speak that will carry you straight til the end.  As you approach that destination though, I must say that you might want to apply the breaks just a bit.  It's not that it didn't end well, it's just that it didn't feel like quite enough closure for the story to me.  I mean we know about the fates of the characters more or less, but it felt like there should have been MORE instead of less...perhaps the option to create a sequel if the author so chooses.

All in all....I thoroughly enjoyed this read, quite more than I thought I would at the start (a happy surprise indeed).  Recommended for older teens and adults due to a few intimate encounters....more blush-worthy than graphic but still, younger readers are forewarned.  This book was scheduled for release today (06/01/10) so be on the look out for it in your local store!  For those of you that recognize the name, Ann Brashares also has the infamous Sisterhood of the Traveling Pants series to her name as well as a few other titles.  If you haven't read this YA series, might I suggest it for a weekend read...though there are four books in the series, they go by quickly (too quickly) and are definitely a favorite of mine.  As for the song reference in the post title for today...it's a throwback to 2001 that I just couldn't resist including.

Special thanks to Lydia at Riverhead Books for the ARC for review.  (THANKS!)  To learn more about this title and many more, check out their site, Facebook, or follow along on Twitter!  For more information on author Ann Brashares, visit her website for the latest.

Okay, so I am almost finished with this and can't really read your review, but wanted to stop by and say, yay! I'm really loving this and can't wait to come back and REALLY read what you thought.

The1stdaughter: LOL. I definitely know what you mean...glad you are enjoying it and look forward to your thoughts when you have finished. ^_^

I finished this over the weekend & reviewed it today, too!

Just a note about the conclusion (or lack thereof)---this is the first in a planned trilogy so the ending is purposely open-ended.

This one's already on my wishlist. I can't wait!

Very interesting!! I'll have to check into this one!

I am pretty excited for this one! I love Brashares and it sounds like a fun summer read. Great review!

This book is on my TBR list--it sounds like a wonderful read. Thanks for sharing!