Elliot and the Goblin War by Jennifer A. Nielsen

Hi there!
Post number two for today, here at Satisfaction for Insatiable Readers.  First spot, went to the final contest in celebration of 'Spooktacular Finds In Reading'.  If you haven't entered any of the four....um, why not?  No, seriously...these are open until 10/30/10 so you still have time to get your entries in.  Special note...there is one contest ending this Sunday 10/24/10 where you have a chance to win 1 of 3 copies of a great book about a library cat...perhaps you know him...just click over on the right hand sidebar under 'Current Contests' to check out all the fun.

Speaking of fun, today's second post is SO MUCH FUN.  I mean really, I can't imagine who wouldn't be able to have a great time with this book, honest.  The spooktacular find for the day....GOBLINS....and they have some rather big plans too.  Rather than keep you in suspense, let me just step right into it.  ﻿Today's book of choice is.... 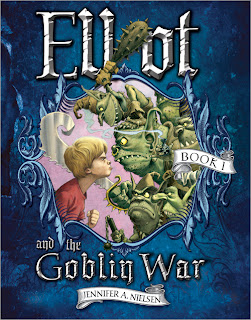 Elliot and the Goblin War
by
Jennifer A. Nielsen


Ah, yes. Good old Halloween. The pumpkins, the scarecrows, the houses decked in orange and black. So much fun to be had at this time of year for both the little ones and those that will remain forever young at heart (*raises hand*). Elliot Penster was ready for a little trick or treating fun of his own…what he got was a wee tad more. You see on this Halloween night there is more to fear than fear itself as there is more out there than merely other kids and adults dressed in ghoulishly fun garb.  The creatures of the Underworld have surfaced to quench their unending craving for….pickles? *checks text again* Yep, pickles….and a side of Brownie (with a capital “B” since we’re referring to a creature or being not the dessert….for which I now have a craving… *mmm brownies*). After a brief encounter of the Goblin variety dubs Elliot as a hero in the eyes of a few select citizens of the Underworld, his future is set in motion, and it's one he couldn't possibly expect…especially since he has no idea it's coming! Will Elliot be able to face the coming challenges especially when someone on the inside is working against him? Will the Goblins be his undoing? More importantly….what’s with the pickles? No use looking back as this adventure lies full steam ahead! 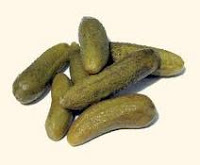 The start to a great new Middle Grade series, you DO NOT want to pass this one up! Seriously! I’m not kidding! But I will stop talking in exclamations here shortly! Okay! Here I go! *ahem* Moving on…

Elliot is such a likeable character and his family is so quirky you almost wonder how they fit together (I think we all feel like that sometimes)...but like all families, they do and quite well. His younger brothers seem to be off in their own world at times but are a source of unexpected brilliance when needed. His grandfather who has a penchant for stealing things (not maliciously…just at random) also has a heart of gold all his own and revealed in time. His sister’s cooking leaves much to be desired but she tries and the effort is full of love. His mother and father round out this little bunch and I must say, their outlook on life is…well, rather odd and yet refreshing all at once. There’s a apart where their…wait, no, can’t say that….okay, where something blows up and they are all like…no worries, we still have each other. (See? A tinge disturbing because I mean HELLO, something blew up…but at the same time heart warming.) 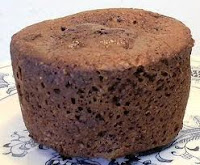 On the other end of the spectrum, we have the Goblins in all their green, bubbly glory seeking to rule the Underworld yet afraid of a little bath (you’ll see). The Brownies who much prefer peace would rather not fight (to the point they just stand there and get gobbled up) and much prefer a great big glass of turnip juice if you please. If you really want to punish either group, give them un-frosted chocolate cake EVERY DAY without milk….that ought to do the trick. Moving on to the storyline…

Imaginative, creative, whimsical, and any other word you could scrounge out of the thesaurus meaning something akin to these. The author's engaging writing style not only keeps us up to date on what's happening in our world versus the Underworld, but it draws readers right in by talking directly to them...er, us. It’s a little bit of Series of Unfortunate Events (without the so unfortunate parts) with a good shake of Nathaniel Fludd, Beastologist (without an Aunt Phil or helpful gremlin) for good measure with a storyline all its own. In short, a great adventure for readers of all ages and one I will certainly be watching for the next installment’s release. 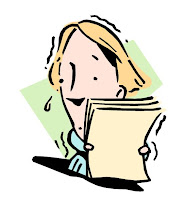 Word to the wise….heed the warning on both the back of the book and within the first few pages though! It seems several other readers didn't quite make it through the book in one piece! *gulp* Glad I was among the lucky that did! (..or did I? AHHH!)

The book used for this review was delivered to me (though not much help of the mailing folks, but lots of help from the author) as a prize from a contest held by the author herself. (THANKS!) For more information on this book and her future works in progress, visit her site or follow along on Twitter!

This sounds fun! I should suggest it to my nephew.

Great review! This sounds really cute! I’ll have to check it out.