The Skull Ring by Scott Nicholson

Hello again!
How goes it in YOUR part of the world?
Hopefully bookishly fun at the very least.  On my "read" radar, exciting news indeed.  I did it! I did it! What is it that I've done? Oh, well I finally finished the eBook that kept lingering in my "Now Serving" sidebar. It's linger status really happened due to my overflowing love for actual paper copies of books versus eBooks combined with my lack of time to read this particular version of literature. *SIGH* Such as the world is today though, a lot of folks are making the switch. I for one.....am not. It doesn't mean I won't read an eBook (cuz I will). It doesn't mean that I don't own an eReader (cuz I do). It simply means that it is not my preference and at least for the foreseeable future will remain that way. Enough of my ranting, you came for a review, did you not? I better deliver then. 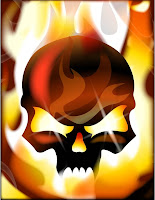 Today's review is featuring a title landing squarely in the Horror genre with all the elements perfect for a Halloween time read. The spooktacular find....hard to pinpoint exactly.  Let's leave it at EVIL in general for this one.  If you are easily creeped out, you might want to read this one during daylight hours, with your protective significant other or your best fuzzy friend that will scare away the shadows in the night....I'm just sayin'. Today's book of choice is.... 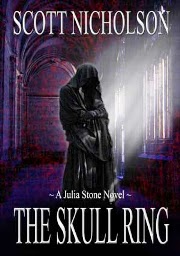 The Skull Ring
by
Scott Nicholson

Julia Stone has many problems in life, the least of which span the range of normal that you or I encounter from time to time. Yes, work worries her. Yes, her boyfriend situation is in a rather questionable status. Yes, money is something that stays in the back of her mind. Empathizing with her, are we? Still....do you have a past that your subconscious is trying desperately to shove into the deepest corners of your mind lest you remember the horror bestowed upon you and watch as your world collapses? Ha...gotcha there don't I? Julia Stone has just this problem. As a child, she was unwittingly introduced into a dark world of evil filled with rituals, sacrifices and creeps; as an adult, those memories laid to rest are trying to break free and skew her vision of reality along with it. Part of this is the work of her therapists, after all...uncovering the truth will set her free....right? Don't be so sure. There's something sinister at work here and the who or what behind it has yet to make itself known. Is Julia ready to throw a light on those events that have scarred her in more ways than one? Better question still....are you ready to bear witness to all she uncovers?

Sounds creepy, right? Well....let me say this; for me, this one is a double-edge sword. I can see where people could be easily wigged out by the contents and story line....I mean it includes Satanic rituals, worshippers, sacrifices, murder, evil people, evil forces, just to name a few. If you have an over active imagination where things you read tend to leave you with residual creepiness afterwards, you may need to skip this one for those reasons alone.....or at the very least, turn on that light I recommended at the beginning of the post. Was I creeped out? No...or at least not in the ways that you would think. Let me explain....

First, I could not connect with the main character for the life of me. I tried...I did.....just wasn't happening; perhaps her own sense of self doubt made her an ill taste to my reading senses. Let's face it, we all doubt ourselves from time to time but really this girl...it hides around every corner. How could anyone go through life like THAT? It may be her circumstances that created that problem, I mean she does have a past that's just screaming for a horror movie version to be made but still....something just kept the connection from being made between me and her...which leads me to my second point.

The point of view is a woman...written by a man. Now, I'm not pulling a feminist card out or anything here, I mean there are plenty of books written from the point of view of a male or female when the author is of the opposite sex.....but this one, for me, some of the scenes that seemed to be meant as a comfort or close experience just weren't. There's one instance where he's describing how Julia could be healed with only a touch (mind out of the gutter, it's meant differently than it sounds there), but because of WHEN it appears in the writing, after several rather vivid and disturbing scenes were just relived, it feels dirty, not touching. But I digress...

The book has its moments that whisk you away on a whirlwind of action down a twisting path of endless corridors; it does. The down side? After you're caught up in that particular section.....it drops. The in between time was mostly filled with narratives and inner monologues that seem to have been written to keep you wondering just who is crazy, which version of reality is actually real, and just where the story is going to end up once and for all. Even the ending is a contradiction as a final jab is thrown in to make you second guess that scene...and an unexpected scene it is.

To its credit, the creepy stuff I mentioned before will certainly keep you raising that eyebrow skeptically or devouring passages with hungry eyes whether you are drawn deeply into the story or not. The cast of characters surrounding Julia is an odd assortment as well but suited perfectly for the story as written. From the therapists who raise more than enough suspicions (in my opinion) to the boyfriend who is simply slimy (you'll see if you read it)...every person you encounter is someone who's ethics and moral compasses are in question, not to mention their sense of self and beliefs.  The skull ring does appear several times in the book and with an adequate amount of fanfare each and every time.

All in all, I would caution younger readers as to the content of the novel.....certainly would say readers should be at least older teens if not adults. Would I pick it up again? Sad to say, probably not. Will I be reading anything else by this author? Yep...I mean really, one book does not make or break an author to me. In fact, I have another of his title's to read later this month, so cross your fingers...we'll see how it goes.

This eBook was received for review from author Scott Nicholson. (THANKS!) For more information on this title as well as his other works, visit his site or follow along on Twitter. Don't forget to check out the stops along his blog tour currently in progress for a chance to win one of 20 Kindles! His stop here at SFIR is scheduled for the 21st, so be sure to check back for your chance to win.

Well done on the completion of that e-book.

This one sounds like a seasonal read but not for me I'm afraid as like your self I have heard a few bloggers say it is quite scary and not a book they'd recommend for children and when it comes to being scared easily I class myself as aged about 8.

Whirlwind of action? Nice ! I love when that happens :)

I really liked this book, so much so that I'm in the process of translating it into German. It's not only fascinating but a great psychological study. We all have different tastes when it comes to reading. Fortunately. That's what makes it interesting!
Christa Polkinhorn
Author of Love of a Stonemason

I love that you make mention that though the book wasn't exactly for you, you still would be happy to try the author again. It's definitely possible that he just isn't fit for this genre? Either way I don't think I'll be picking it up, just on account of me getting to creeped out easily. Fantastic review!

chelleyreads: Certainly creepy enough for it! ^_^

Petty Witter: Thanks! LOL on the easily scared bit....I understand though! Have quite a few friends the same way, so you're in good company.

Christa Polkinhorn: Yes, agreed. Different tastes in books helps bring out the world of flavor in them all. Thanks for stopping by and best of luck on the translation.

the1stdaughter: Hmm...interesting thought there. Not sure. I haven't read a lot of books in this genre specifically to really say one way or the other on that....but either way, it seems to be where his heart/passion lies, so KUDOS on the effort, follow through, and drive! Thanks for the kind words too...^_^...and no worries on the easily creeped out part, plenty of other readers right there with you.