Grandmother..what big EYES you have!: The Story of Little Red Riding Hood

Hi there!
Welcome to a weekend edition of Satisfaction for Insatiable Readers.
Why a weekend edition?  Well, because it of course falls on the weekend (silly reader) and there are just SO many good books and so very little time that even though weekends are generally kept fairly light, all time must be utilized.  Does that answer your question?  *waits for nod*  Good....and away we go!

Today's post is a childhood favorite and deals with the spooktacular find of....the WOLF.  Yep and not just any old wolf either; one with a particularly calculating mind.  Without further adieu, may I present today's book of choice.... 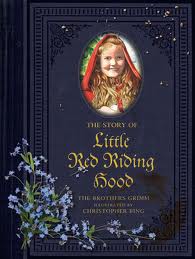 Little Red Riding Hood, the young girl with a heart of gold, was sent out by her Mother to take her ailing Grandmother some provisions to help speed her recovery.  Being the sweet girl that she was, Little Red happily obliged and set out on the half hour journey to the cottage in the woods.  Little did she know that lurking in those very same woods was a conniving old wolf looking for a tasty little snack just about Little Red's size....

In this new edition of the childhood favorite, the classic story is preserved﻿ and yet added to remarkably with the beautiful illustrations supplied by Christopher Bing.  The colors are rich and bring a rosy glow to Little Red, much as one might imagine this sweet girl would have had in life.  The drawings are detailed not only in the style used which applies liberal amounts of precision lines and lines of texture, but also in the way the scenes are laid out.  With every turn of the page, you are greeted with another two page picture spread capturing both the lay of the land and the emotions conveyed in the written passages running along the bottom of each scene.  From the beauty of Little Red's cloak to the natural wonders of the forest both great and small, your imagination gets a wonderful boost from all your eyes will behold.  There are even sprigs of fresh flowers that could have been picked by Little Red herself for her Grandmother strewn along the edges of the page....a wonderful touch and another way the illustrator's attention to detail is displayed.

Although the illustrations are more than enough to set this edition apart from so many others, there are two other unique and rather fascinating aspects that readers will want to take note of.  First up...the inclusion of another tale detailing a meeting between Little Red, Grandma, and ANOTHER wolf (since we know what happened to the first one...right?).  This time around, the wolf is even MORE calculating than the first but Grandma also gets to show off her smarts as they try to outwit him.  Second inclusion to mention is at the book's end.  There is a small folded "book" of sorts attached to the inside back cover containing another translation of the original story.  Though much the same generally speaking, it doesn't end quite as neat as we've come to believe, serving out a moral that is decidedly truthful if not very straightforward...."...children...especially young girls, pretty, well bred, and genteel, are wrong to listen to just anyone."  It goes into more detail but I'll let you discover that one your own (don't want to spoil the extras for you completely).

In summary, a recently released edition of the timeless classic that is certain in this reader's opinion to make a great addition to any reader's library.  This book was released a few short weeks ago, so be on the look out in a store or online outlet near you.  Special thanks to Lara Starr at Chronicle Books for the review copy.  (THANKS!)  For more information on this title and many more in their current catalog, visit them online or follow along on Twitter.

What a beautiful looking edition :)

That story still kind of scares me, like Goldilocks. I don't know why. Not one of my favorites, I guess!
I'm a wuss.

Sounds intriguing...and I love beautiful illustrations, so will have to take a look!

Now I'm really sad I passed this one up! It looks fantastic and like something Littlebug may get into in a few years from now. I'll just have to get a copy the "old fashioned way" LOL. Love your review though, it's hard to make those old stories come to life for kids now and so it's nice to hear of "newer" versions that do a good job.

Sam: Agreed! The pictures are lovely...

Cleverly Inked: Yep. One to see!

Michelle: Well I mean I know why...hello? The ending? Not necessarily one of the "pretty" stories but still a classic. ^_^

Alexis561: Yay! Definitely worth it for the illustrations alone.

The1stdaughter: Exactly! Bringing the classics back to life for a new generation of readers is hard, but I do think this one did it quite well. ^_^