The Frog Prince...Continued by Jon Scieszka

Hi there!
Welcome back to a new week here at Satisfaction for Insatiable Readers!
Here's hoping you are having a great day and blue skies are all that await you this week.  What's that?  Why am I so chipper today?  Oh, no reason....

﻿Hehe.
Yup.
Today's the day and so this post....totally pre-scheduled and probably all by it's lonesome unless I feel like logging in later on...doubtful, but ya never know since I luvs talking with all of you out there in the bloggy world.  But enough about me...let's get this PAR-TY started!  Today's post features a book from my own personal library as in straight from the heart of Mount Book-ulus itself.  It pays a visit to a childhood classic while adding its own unique twist (hmm, sorta like each birthday does if you think about it).  The book of choice for today is.... 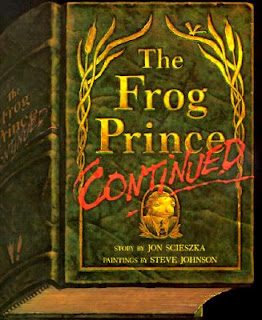 The Frog Prince...Continued
by
Jon Scieszka
painting by
Steve Johnson

﻿Once upon a time there was a frog....a girl kissed him (yuck!)...he turned into a prince...and POOF!  They lived happily ever after...or did they?  What REALLY happens to fairytale characters once we close the door on this very small chapter in their lives?  I mean they hardly even know each other!  How could they possibly know if they'd get along...have similar tastes...etcetera?  Is ONE kiss supposed to cement their relationship for all time?  What if it was just a fluke?  Here's your chance to find out....

Okay, I know what you're (probably) thinking....why on earth did she choose this book for Halloween?  You say WHY...I say, WHY NOT?  Let's break it down for a second here.  It has witches (several), magic (good and bad), and a frog...well, a frog prince, but he could still be used in a potion I'm sure since he kept the frog tongue according to the pictures which definitely puts him as more frog than prince in my book.  Also, did you see the cover?  *waits patiently while you scroll up*  The word "continued" is scrawled across the front in red...looks pretty ominous if you ask me (and you did ask, right?  Just making sure I'm not hearing voices now.... *glances around*).  Speaking of the cover...though my copy is a paperback, I love the look both front and back of an old-timey book with a worn leather cover and gilded letters across the front; definitely gets you in the mood for a good story...and it doesn't disappoint.

The characters from the original story are reintroduced to readers after their wedded bliss has reached an end and real life has taken hold.  In an effort to solve their problems, the Frog Prince (or is it more appropriate to say "former-frog-now prince"...) sets out to seek magical aid.  I won't go into too much detail since the story is rather short and thus easy to spoil, but his ensuing adventure takes a Goldilocks and the Three Bears turn as he encounters witch after witch after witch.  A great detail to note about these gals...they are all from other fairy tales!  That's right!  Despite the fact that our now-prince-former-frog was a frog for many a day, he's even heard of them before and was wisely warned to avoid them if possible.  The fun part of this aspect is in discovering which witch is which (say THAT ten times fast), or rather which stories they are from through the meticulous details inserted within the paintings.  See if you can pick them out along the way and then discover through the story itself whether you were wrong or right!  Oh, and the ending...bet you won't see THAT one coming...okay, well you'll see the ending since you'll be turning the pages but what happens, you won't guess.

All in all, a fun read from cover to quick ending; another win for picture and storybook fans in a supposedly declining market (we'll see about that).  Recommended reading fun for all ages.  As this title came from my own bookish treasure trove, there's no one to thank for a review copy....but should you wish to learn more about it, my own version lists Puffin Books as the publisher, so stop by their site for a looksie.

And this sounds absolutely hilariously like something I must read. I love fairy tale variations, and the Frog Prince is such a fun one ... Definitely gonna keep my eyes out for this one!

Happy Happy Birthday!!!
Oh, I hope you are having a fantastic weekend, and enjoying a day to yourself! Missed you today, but I completely understand!


PS...Love the review, may pick it up for the Turkeybird. :o)

RivkaBelle: Thanks! ^_^ And yes....definitely a fun/funny book. Short but full of laughs and smiles.

The1stdaughter: Thank you! ^_^ Yes, the weekend was great, love all the birthday fun and ready to jump back into the mix. Oh and yes...I think Turkeybird would like this one eventually! Definitely fun...

Big fans of Scieszka at our house. Love how you worked in Halloween.

Happy Birthday Author: Thanks for the bday wishes and the kind words! Yes, I think every has at least a little fangirl or guy in them for this author.

This sounds like a very fun read! Thanks for the review!