Happy Monday to you fellow insatiable readers!
I hope your weekend was filled to the brim with good times and the week treats you well.  To help get you started off on the right foot, today's post is a happy happy one indeed.

That's right!
It's time to wish another book and fabulous author a HAPPY BOOK BIRTHDAY as their latest effort makes its way into the land of the published.  Today's celebration is for the third installment in a Middle Grade series that is perfect for readers of all ages.  Full of adventure, myth and lore all whilst incorporating a few well placed facts about the here and now.  Today's book of choice is.... 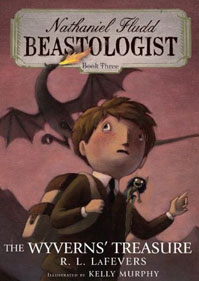 After their latest adventure (What's that?  You need a reminder?  Just check back to Friday's post, or click here...), Nate and Aunt Phil return home to an unexpected surprise....someone's been in their house! Well, perhaps in is not the right word here, more like ransacked!  Cornelius (the dodo bird that lives at Aunt Phil's) only escaped the intruder because he had been knocked out in the initial scuffle and the baddies thought he was stuffed. When asked who they were, he reveals the blackguard's face looked like....Philomena (Aunt Phil)! GASP!  But, wait a minute...how can THAT be?  She was with Nate solving the mystery of the Basilisk escape.... *ponders*

Oh no! It looks like one of the descendants (Obediah) of the eighth Fludd son (Octavious), the black sheep of the family as it were, is back and looking for quite more than a family reunion. As if this wasn't enough to take in, news travels to this world weary pair that the wyverns are rampaging near Wales...a situation that needs their IMMEDIATE attention!  What to do, what to do...but staying true to their family occupation of sorts they go where they must.  Wales, ahoy!  What will they find waiting for them in this new destination?  What on earth ARE wyverns and why would they rampage?  Strap in tight and be prepared for a bumpy ride as the Fludd Beastologists are on the case....

Let us begin with a small explanation.  What are wyverns?  Wyverns are one of the last surviving breeds of dragons in western Europe (according to the text). Apparently they can talk, but it's so low, it sounds like grumbles usually to the human ear, the use of an ear horn works to decipher it. They like shiny things, and mead...but not for an un-introduced person to look them in the eyes lest you prefer to be extra crispy on your way out...and that's just for starters!  Consider it Wyverns Training 101 if you will.  These facts come into play more than once as Aunt Phil and Nate try to figure out what exactly has them in an uproar...or perhaps whom.  *dun dun dunnnn*

This book reacquaints us, even if ever so briefly, with Cornelius the *ahem* "lovable" Dodo and housekeeper of sorts to Aunt Phil and freshly introduces new characters that will obviously play a vital role in upcoming stories.  Without spoiling it for you....we learn the true identity of the "mysterious man" that's been trying to abscond with the 'Fludd Book of Beasts' as well as a few good speculations as to why he is in hot pursuit.  The one question that is sadly alluded to but not ever really answered (at least not with concrete evidence as of yet...which leaves room for hope even if ever so small) is whether Nate's parents are really and truly gone or just merely being held captive by baddies we've yet to discover.  Either way, Nate is shaping up to be quite a marvelous young man.  He's brave and stout of heart, not afraid to do what's right despite the consequences and a marvelous reader of those in his care (aka the beastie friendlies...and non....that are in his charge).  There is a lovely example of this towards books end, but alas, to reveal it would spoil it for you...let's just say that he makes a few final decisions based on something he recognizes within himself that is reflected in another.  (Confused?  Hope not...but that's the most I can say while giving away the least!)

A few more things to love about this book...the author once again employs her unique ability to intertwine a fascinating story with lessons to be learned throughout.  You learn of Pavlov's experiments (you know, the dog and the bell and the behavior association...) as something similar is utilized within the book.  A fascinating spin on where geodes come from is also introduced although the truth of that matter may be more fiction than fact (it is fun to imagine though!).  The illustrations are once again a central feature that not only keep the book moving forward but allow for a little visual play time as well.  Check out the chapter headers....you'll see what I mean...definite props to the illustrator.  Lastly, I love how close the stories in the series fall in regards to the time line.  Books one through three cover a mere two weeks in the storyline....an unspoken promise of many adventures yet to come. Good!  I hate saying goodbye (even if it's just until the next re-read) to characters I love.... 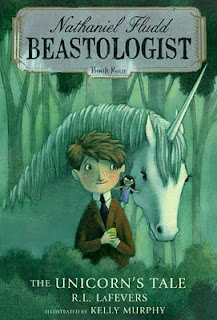 This book was scheduled to hit shelves everywhere today (10/04/10), so be on the look out at your favorite store or online retailer.  ALSO, special fun fact to note...the FOURTH book in the series, The Unicorn's Tale already has a listed release date as well (as of this post, 04/04/11) so once you finish this fun chapter, it won't be TOO much longer til you get to set out on your next adventure with Nate and Aunt Phil....I know my calendar's marked!  I mean not only is it in a series I've so far enjoyed immensely, it deals with UNICORNS (educated guess from the cover...see it over there --> ) which I've always loved!

ARC for review read via NetGalley.  (THANKS!)  To take a look at their current catalog of new and upcoming reads, visit them online or follow along on Twitter.  To find out more about the author, her website and Twitter feed are prime for the reading.  Last but not least, the publisher, Houghton Mifflin Harcourt, and their extensive catalog of books are accessible via their website or...guess where?  Yep, Twitter!

I love your idea of a happy book birthday. Thanks for another informative review, I really like the look of this book.

I'm putting those little suckers on hold right now at my library.!

"I'm flying high...deFYING gravity. And nobody in all of OZ, no Wizard that there is or WAS, is ever going to bring meeeeeeeeeeeeeeee down...(look at her, she's WICKED)..."

I LOVE that musical!

I picked the first few books up in this series the other week. They sound so awesome.

Thanks for the great review :)

I should grab this for my nephew.