Hi there everyone!
Welcome back to Satisfaction for Insatiable Readers!
It's Friday.  The end of another week.  The gateway to the weekend.  Before you dust off your sneakers and run for the door, I present to you a suggested book to accompany you on your weekend reading adventures.  It's the second in a series, and the perfect magical, whimsical read for all ages.  Making it the first of the "Spooktacular Finds In Reading" for the month, let's get the review under way, shall we?  Today's book of choice is.... 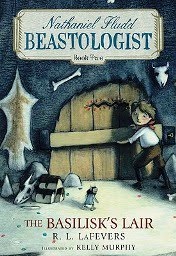 Aunt Phil and Nathaniel have just helped save a phoenix so a little rest and relaxation is in their future, right?  WRONG!  That mysterious stranger that was out to steal the Fludd Book of Beasts is BACK and somehow seemingly at the root of their next problem....an escaped basilisk!  You know...the creature that can kill a man with its glance, wilt bushes with its breath and has poisonous venom highly prized by evil minds everywhere. ~shudders~ Yes, somehow this mythical beastie has been set lose of its humble domain and from the looks of it...it was intentional.  Who would want to create such havoc?  Better still, WHY?  If the beastologists are even going to try to decipher this mystery, they best keep their wits about them lest they reach a fate which would render them unable to assist...

What can I say....I read this throughout the course of one day...yep, that's right! Why? Why?  Because...it's just THAT good! Seriously, given the chance to work it's magic, you'll become a fast fan in no time.  I fell in love with the series after reading book one via NetGalley back in September 2009 (link to my review just in case you're curious), so when I discovered book three was coming out October  4th, 2010, I HAD to read it!  Now, I know, I know...this post is about book two, not three, but see there's a little story to that, which I'm about to share.  I discovered book three's release date when perusing the eBook site in search of a midday read.  Seeing that I had apparently missed book two's release, I searched the site, but to no avail.  Alas, I was torn!  I wanted to read book three, but could not (and would not) until I read book two.  As most of us are, I happened to be on Twitter at the time and lamented my lack of finding the second title.  No big deal, right?  Who DOESN'T do that!  Well, in this case, my random wail was heard...by the author!

Yep, that's right!  Author R. L. Lafevers, fabulous person that she is, had been counted among my tweeps for some time (okay so since back in 2009 when I read the first book) as both someone I follow and that follows me back. *smile*  She happened to see my tweet and TADA!  I am now the proud owner of a SIGNED copy of book two!  ~happy dance~  It is proudly on display right next to the open spot for book one that I just happened to order a week or two prior to this incident....go figure.  So a BIG special thanks to this author for not only the book but for the fabulous series that it is a part of!  (Yes, I know I'm saying fabulous a lot here, consider it the word of the day because it just fits...)  With that said, on to my thoughts...


Book two was a definite joy to read as I stepped back into the world of Nathaniel Fludd and his newly found beastologist-in-training duties. In this book (as in the first), you get an adventure and a learning experience all in one...and guess what?  Younger readers not always up for a "fun learning experience"....won't even notice!  That's how well it blends into the story.  If readers have questions along the way or simply wish to refresh on some of the people, places, and things they learned along the way, Nathaniel's guide to all of these references is included at book's end.  Speaking of Nate....

You've got to love Nathaniel.  He always follows his heart, even if it happens to go against Aunt Phil's instructions; lucky for him, it usually pans out.  Actually, it's not so much luck that's on his side as there are plenty of unfortunate things that happen to him and around him (such as the whole reason he is even with his Aunt....his parents disappearance!), but more his use of critical thinking and the ability to apply both what he has learned AND observed.  Take his little pal Greasle for example (promise, this example won't ruin the story).  She's a gremlin, one of the very creatures that falls under their jurisdiction and yet considered a pest to be gotten rid of since they tend to suck every last drop of oil from things making engines and such not run quite so well.  Aunt Phil's first reaction, even in her esteemed wisdom, is to be rid of her, but not Nate.  Nate sees that she has the ability to go against the grain, holding her ingrained urges at bay, and become not only usual, but a friend (that aids them quite well when needed if I do say).  It's that type of heart and courage that will aid him in this adventure and many more to come.... 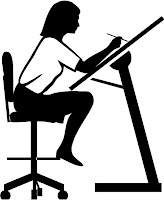 Last but not least, we can't forget the illustrations.  That's right!  It may be a Middle Grade series (genre wise at least) but they did not forget to provide visual stimulation along the way.  Utilizing classic pencil drawing techniques, the illustrator, Kelly Murphy, takes things one step further by bringing the pictures to life in the line shading and character expressions.  Did I fail to mention that Nathaniel likes to draw during his expeditions as well?  I wonder what those would look like....oh, wait...I don't HAVE to wonder; they're included!  Even the chapter openers have illustrations, and in this case, they are bones.  The fun part of that?  See if you notice something that happens along the way in this space as the chapters progress.....it's subtle but a nice touch.

Recommended reading for all ages; whether young or young at heart, the magic will sweep you away.  Stay tuned for the book birthday of book three coming up on Monday (10/04/10) when it becomes available in a bookstore near you!  You can be sure we'll be celebrating it right here on the site, so check back in for a look at all the fun you're in store for.  For more information on author R. L. Lafevers or illustrator Kelly Murphy, feel free to click on the links throughout this post....believe me, there is much fun to be had at both of their sites.

I always find some great treasures for my sons box here.

Gotta read this one and the first one. It sounds like a fun fast read for me this season.

Michelle: Yes, definitely a FUN series to check out, can't wait for the next one..and...OMG! The random musical numbers are going to crack me up! ^_^ *ponders which one to return the favor with*

Sweeping magic? What a recommendation! :)

This sounds like the perfect Middle Grade novel and one I've really been wanting to read. I absolutely love when a book turns into a learning experience without the reader being blatantly aware of it, it makes it much more enjoyable.

Definitely on my list! Thanks for another fantastic review. :o)