Hi guys and gals!
Welcome back to Satisfaction for Insatiable Readers...the place to be when your habit is reading, and it's one you never hope to kick.  Speaking of addictions...

Today, we're playing host to a RABT promotion starring a Young Adult Fantasy/Paranormal title that is going to have all the vamps and demigod fans atwitter.  Good news?  It's the first in a current trilogy (I say current because one never knows when an author will choose to revisit a series) AND the other two titles are also ready to be devoured should you embark on a binge session.  The not-so-good news?  There was one little hitch I stumbled on in my ride through the epages, but we'll touch on that in a second.  First and foremost, allow me to set the stage for you because tiny low aside, you're gonna want to get in on this series.  Ladies and gents, DO NOT MAKE EYE CONTACT with any characters you may encounter in today's post but have your wish list at the ready!  Today's ebook of choice is... 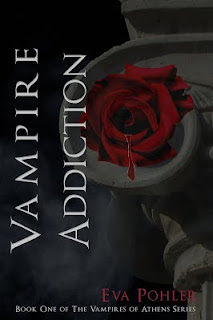 About the book....
Some call them “tramps.” In Greek, they are called vrykolakas, or “vryks,” which sometimes gets translated to “freaks.” They are the vampires of Athens, created centuries ago by the Maenads. They live in caves beneath the acropolis, without economic resources and according to rules imposed on them by the Olympians. They are forbidden from turning humans into vampires, which happens when all of the blood is drained; however, they are allowed to drink from a willing mortal. Some mortals are willing because a vampire bite will infect the body for six hours, and, during that time, the mortal has the powers of flight, invisibility, strength, speed, x-ray vision, and mind control. Such great power can become irresistible, though dangerous and addicting to mortals.

As seventeen-year-old Gertie, studying abroad from New York, uncovers the unfathomable secrets of this ancient city, she unwittingly becomes a catalyst in an uprising led by Dionysus, the god of wine and lord of the vampires.

This is the story of one self-proclaimed vampire lover (as in the lore and mystic, fictitiously of course) that learns that ever-so-hard lesson of being CAREFUL WHAT YOU WISH FOR.

Gertrude, aka Gertie, is a bookworm like you and I, that's still seeking her place in this crazy old world.  With much enthusiasm on her parents part (they don't really connect with her, go figure), she lands on the shores of Athens and in a mess of mythical proportions. How so?  Well, you see, her host family has ties to a demigod, for reasons I can't reveal or the surprise will be ruined, as well as one particular vampire, despite the fact that they abhor the race as a whole (seriously, their bite marks on a mortal are called "tramp stamps").  Messy huh?  You don't even know the half of it...and the other half is complicated by the fact that our previously unwanted flower is now a social butterfly to an extent and everyone wants a piece of her here...only problem is, some ACTUALLY want a piece of her, or rather the part running through her.  ~shudders~  If she can keep it in her veins for a while, she may just make it out alive....then again, have I mentioned one of the two sides to her love triangle is a vampire?  Yeah...

Character wise, I was pleased.  Gertie was likable enough and written with today's teens in mind (complete with GoodReads references).  I appreciated her candor, her reactions to situations that were frankly beyond belief (quite the level headed one here), and her desire to help others pretty much to the detriment of herself (okay, so that may not be a GREAT trait, but she was kindhearted and sought the good in others).  I did wish she would take a step back from things at times to assess the situation, but that just wasn't her...she was more react-now-think-later.  Now for someone that was definitely more assessing, we have to look at Hector (love option numero uno), and if we add in some major secretiveness, we can easily apply that assessing nature to Jeno (love option numero dos).  OH these two, there were times I wanted to murder both and others where I could see Gertie's indecision clearly.  What's that?  You didn't think she could have BOTH now, did you?  As for the others, her host family, though loving, was filled with too many secrets and had they been shared at the start, may have avoided the utter catastrophe at book's end.  *shakes head*  Hindsight is said to be 20/20, though with vampire powers they should've been that from the start....

Story wise, I was a little torn. I liked the mix of mythology, both vampiric and Greek, with the bit of a history lesson along the way.  I appreciated the quest created for Gertie to lead a life of her own with those that will actively care for her, and the pitfalls she faced along the way.  The histories built into the tale for the Angeli family, Hector, and Jeno, were certainly interesting and kept readers invested in the large-ish cast of characters.  The use of traditional vampire lore was great to see, though I have no problem with sparkly vamps (^-^), even if it was unusual to see all the powers manifest in each being (that's A LOT of power!).  My small hang up came actually with something that happened towards the story's beginning that was danced around a time or two but never explained.

There's a scene where Gertie jumps off a boat to save Hector (before she knows who/what he is), they are saved in dramatic fashion that suggested she might have been hallucinating, and wakes up naked in his bed.  *-*  She rightly accuses him of drugging, he vigorously denies it, and...that's pretty much it.  It's brought up again later on when she's had another black out of sorts, this time with Jeno involved, and while it's explained away as a result of vampire influence...that doesn't explain that first scene.  Hector is not a vampire.  He didn't associate with them...exactly.  He doesn't have that type of power...so what's with the skin session that supposedly wasn't?  Like I said, confused on that one point, but the rest, I was definitely rolling with.

In the end, despite a few plot holes, I was left VERY curious to see just what the future holds for these characters...especially after the betrayal, love triangle, and twist in the final moments.  Eek!  Suffice it to say that the second and third books are now on my wish list.  ^-^  Recommended for YA Fantasy and Paranormal fans; it's got the glitz, the glamours, and enough old school vamp style to keep die hard purists satisfied, but enough of the feels to give a stilled heart a skip or two. 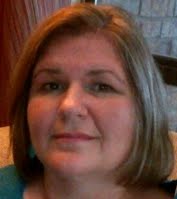 Eva Pohler is the Amazon bestselling author of The Mystery Book Collection and four series for young adults: The Gatekeeper's Saga, The Gatekeeper’s Saga Spin-Off Series, The Purgatorium Series, and The Vampires of Athens. Her books have been described as "thrilling" and "addictive." A Kirkus reviewer said of The Gatekeeper's Sons that it was "sure to thrill Hunger Games fans."

A reader herself, Eva writes in multiple genres, but all of her stories blur the line between reality and fantasy, truth and delusion, and draw from Eva's personal philosophy that a reader must be lured and abducted into complete captivity in order to enjoy the reading experience.

Special thanks to Cami at RABT for the ebook for review as well as the chance to bring this tour to you.  (THANKS!)  For more information on this title, the series, the author, THIS TOUR, or those on the horizon, feel free to click through the links provided above.  This title is available now, so be on the lookout for it at an online retailer of your choosing in both ebook and tree book formats.

Wow. This book sounds fantastic. Thank you for posting your review.

Thank you for posting

Thank you for having me!