Today, we're got Rachel's Random Resources on deck with a stop along their current featuring the work of author Frances Kempton. It's the first release in a planned trilogy and, from the sound of things, it's going to be QUITE the story filled with murder, mystery, magic, and curiosities. Sound like your bag? Great! Let's get in step with today's title in the spotlight... 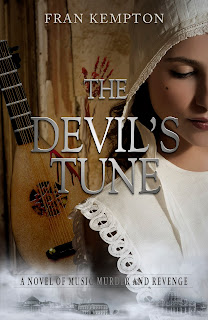 The Devil’s Tune
by
Frances Kempton
About the book...
Carlo Gesualdo, prince, composer and murderer has his wife and her lover killed in Naples in 1590. The wife's maidservant,Laura Scala, witnesses the events and vowes to avenge her mistress.
The princess, Donna Maria d'Avalos, rescued Laura in Sicily after she had been raped at the age of thirteen. Laura devotes her life to her saviour and after the murders she spends years of her life trying to be revenged on the musical prince.
The scene moves from Sicily to Naples and Venice, back to Naples and finally to the New World. Laura believes she is carrying a curse. Everyone she becomes involved with appears to suffers misfortune and death.
A Jewish girl in the Venetian ghetto is kidnapped and sold into the Sultan's harem, Laura's daughter is placed in an orphanage without her knowledge, the artist Caravaggio uses Laura as a model and meets a tragic end.
Three beautiful pearls given to Laura by her mistress play a part in the story. Is Laura really cursed - or is it her connection with the murderous prince who dabbles in the occult?
A gypsy woman is burned at the stake, a Venetian gondolier meets a mysterious fate and Laura becomes a skilled herbalist and poisoner by default before the story ends in the New World. The background to these events is the strange and compelling music of Gesualdo.
AMAZON UK | US
~~~~~~~~~~~~~~~~~~~~~~~~~~~~~~~~~~~~
~~~ EXCERPT ~~~
At the castle the artist Caravaggio urges Laura to do what she has planned to do for years, poison Gesualdo.
‘I thought you had more sense, Laura. A man like the prince, a murderer, a sadist, there must be plenty of people who would like to kill him.’…
Later-
It was important to keep your wits about you in that kitchen. Donna Polissena and her German assistant tried out their poisons on the staff, especially on any of the pages who had displeased her. Mostly, they suffered mild stomach upsets. The Germans were not as skilled as the Italians in these matters.
One day, I heard one of the pages whispering to another that he should place “something from our friend” in the dish that was to be served to the prince and his wife. The something appeared to be a slice of bread covered with a sauce. I thought that the poison must be in the sauce, but in that I was mistaken. There was still the matter of the mysterious soup that Castelvietro had been stirring. I needed to find out what it contained.”
**Thank you for featuring me on your blog.  My pleasure!  :)
~~~~~~~~~~~~~~~~~~~~~~~~~~~~~~~~~~~~
About the author... 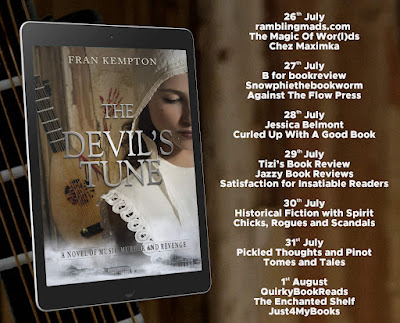