Here’s hoping your 4th of July celebrations went off without a hitch, and if the weather misbehaved, like it did in my neck of the woods, you at least got to spend some time with friends and family. Today, we’re shining the BOOK SPOTLIGHT on a title now on tour with Rachel’s Random Resources. It’s the first book in a planned series and, from the sound of things, the story itself has some heavy plot twists to unravel before reaching book’s end. But, let’s not get ahead of ourselves, as we must do things properly and introduce the title...along with a SPECIAL EXCERPT to tantalize and tease! Ready or not, fair readers, today’s title in the spotlight and book of choice is taking center stage... 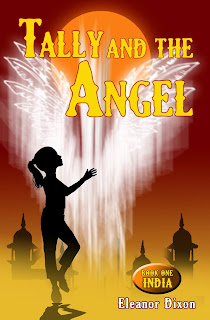 Tally and the Angel
by
Eleanor Dixon
About the book...
When Tally discovers her pendant is home to the Angel Jophiel, she knows life will never be same again. But what good is an angel who won’t appear in front of others? Especially when she needs to convince her friend Balvan she knows where the kidnapped children of India are being held. Will Jophiel help Tally and Balvan escape the kidnappers’ clutches, or will they all perish?
AMAZON US | UK
~~~~~~~~~~~~~~~~~~~~~~~~~~~~~
~~~ EXCERPT ~~~

It is the evening of the funeral of Tally’s mum. Dad has been into her room to say goodnight and give her a gift with a letter that Mum had left for Tally. He also talked to her about his future plans and Tally is feeling pretty wretched.

Tally couldn’t obey her mother. She couldn’t ‘not cry’. The tears burned down her cheeks and her throat did that horrible achy thing it does when you try to weep quietly. It had been such a wretched day. She wanted her mum to be here, to hold her and make everything all right.

She looked at the pendant. How come she’d never seen mum wearing it?

Probably because how was anyone able to wear such a chunky thing? It would stick in her chest and keep her awake all night, she thought crossly, and she shoved it onto the bedside table. A precious object it may be, but it wasn’t her mother. It wouldn't change anything. It might be priceless, but it could be worthless for all she cared at that moment. It wouldn't bring Mum back and that’s all she wanted. She would figure it out in the morning. Right now she wanted only to cry herself to sleep.

She’d better put the lid on over the angel first though, she thought, and she reached out. Then she snatched her hand back. How odd! Hadn’t his eyes been closed before? Now they looked very much open, like they were looking at her. Something compelled her to pick the pendant up.

Tally expected it to be cold, but it was warm, and although made of stone it didn’t feel scratchy or hard. She studied the chain. It wasn’t long enough to slip over her head, but there was a clasp, so tiny it was nearly invisible. She opened it easily though and put it round her neck.

There! She didn’t even have to fumble - she did it up with no help from anyone and let the heavy, yet strangely light angel pendant fall onto her chest, just below her collarbone. Then she lay down and pulled the duvet over her ears.

She had got cold sitting up. She carried on weeping but did it quietly into the pillow. She didn’t want Dad to hear her. He was probably dealing with his own sadness and wouldn’t want to cope with hers too.

Eventually she got drowsy. The pendant seemed to nestle against her chest like a miniature hot water bottle. Then she had the strangest sensation, as if she were shrinking; getting smaller and smaller until she was no bigger than the tiny angel and he could stretch his huge wings and fold them all around her to warm, comfort and protect her. They were so soft, like duck-down or a fleecy blanket, yet strong enough to hold her weight as if she herself had become a feather. Her deep sadness lifted, and she allowed herself to sink into the downy depths of the angel’s wings and drift gently off to sleep.

My school life was spent in a girls’ boarding-school specialising in classical ballet and on leaving I danced professionally, touring Europe, for 4 years. After that I ran my own ballet school in Athens, Greece and simultaneously volunteered as a veterinary nurse, as my love of animals is the driving force in my life. I returned to England with my horse and my cat, and now live on a smallholding in Shropshire with various farm animals and a constant stream of pets.
I started writing while in Greece and completed a Creative Writing Course with the Writers’ Bureau. The same year, I won an annual competition in the Writing Magazine for an adult Fairy Story.
On my return to England, I wrote two children’s books, but my new life, caring for Highland Cattle, sheep, hens and pets, coupled with extensive global travel, meant that writing for publication took a back seat. I continued my love of writing with a daily journal and amusing travel blogs of each trip.
I am now writing full time and TALLY AND THE ANGEL is the first of a planned series. Their next adventure takes place in Canada, in North Yukon and the third in Japan. I intend them to have adventures in Greece, Egypt, Peru, Africa – anywhere I have been, really.
My first book THE GRACEFUL GHOST is shortlisted for the UK Selfies 2021 Award.
SITE | FACEBOOK | INSTAGRAM
~~~~~~~~~~~~~~~~~~~~~~~~~~ 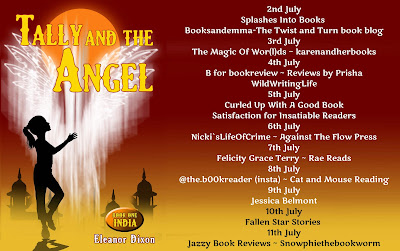