Today, we’re teaming up with Rachel’s Random Resources to shine the BOOK SPOTLIGHT on a title that just might be your next must read! To tantalize you further than you average “read all about it”, we’ve also got a special excerpt just for you. So, get ready...get set...as today’s title in the spotlight takes center stage... 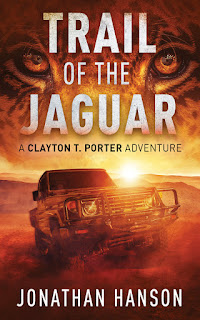 Trail of the Jaguar
by
Jonathan Hanson
About the book...
Biologist and wildlife photographer Clayton Porter witnesses what appears to be a routine drug-smuggling flight across the Arizona-Mexico border. Instead, he uncovers a sophisticated operation involving a secret lodge high in the Sierra Madre, canned hunts for endangered jaguars, a ring of opioid-dealing doctors in the U.S., and a string of cartel victims partially consumed by a large predator. After he unwittingly throws a wrench into the works, Porter becomes a target of revenge, and resorts to skills from his military service to save himself and those close to him.
--→ GRAB YOUR COPY TODAY <---
~~~~~~~~~~~~~~~~~~~~~~~~~~~~~~~~~~~~~~~~~~~
~~~ EXCERPT ~~~
I have chosen for an extract a passage that introduces one of the central characters in the book, an eighty-ish ex-Green Beret who owns the sprawling ranch where the book’s protagonist lives in a remote adobe cottage. The protagonist and narrator, Clayton Porter, has just been released from the hospital after a harrowing interaction near the border that resulted in a gunshot wound.

Downhill about a mile, along a winding two-track, was the main ranch house, a much larger, sprawling affair with an adobe core from around the same time period as the upper house, and four or five additions, built as needed and out of whatever materials worked or were cheapest at the time—stone, red brick, plastered concrete block. An Aermotor twice the diameter of the one at the uphill house drew enough water for the stables and corrals out back, which housed a half dozen well-bred working quarter horses, several from famous Hashknife lineage. The solar array was four times the size of mine and fed a massive bank of Rolls-Surrette batteries, backed up by a ten-kilowatt diesel generator.

I pulled up to the big house and parked the brand-new rental 4Runner which, astoundingly, Hinwood had somehow arranged through official channels while my Land Cruiser was recovered and trucked over to New Mexico to have its engine replaced by my long-suffering mechanic friend. I wasn’t sure if they were buttering me up to keep me from thinking about a lawsuit, but if so they were wasting their money—I’m just not the opportunistic litigious type. Nevertheless, I was enjoying the air-conditioned 4Runner, which rode a lot better than the Land Cruiser and was thus much gentler on that .40-caliber hole through my hip.

A black-and-white border collie that had been dozing in the shade on the porch stood and watched the strange vehicle warily. When I shut down the engine he barked several times until I opened the door and shouted, “Kit! What’s up with the barking?” At the sound of my voice the barks changed to high-pitched yips, and the dog leaped off the porch and raced toward me at top border-collie speed, which is alarmingly fast when you’re in the way. At the last second he skidded and turned sideways so the body-slam collision-velocity with my legs was reduced to twenty miles an hour or so—at least that’s what it felt like to the bullet hole. I kneeled down gingerly and accepted a flurry of licks, then the dog bounded off to lead me to the porch. As I mounted the steps I braced myself for the next greeting, and sure enough as I passed under the massive beam supporting the outer edge of the roof a huge black cat leaped from it onto my shoulder, secured himself with what felt like about sixty claws, and began purring loudly enough to rattle the screen door I was approaching. I reached up to scratch behind his ears and said, “How’re you doing, Pounce?” Which elevated the purring another notch.

Through the door came a baritone voice, “’Bout damn time you were back. Gettin’ tired of watering your damn flowers and feeding your damn chickens.”

He wasn’t at all, of course, but had to say so.

I opened the door and stepped into the cool, dim great-room that was the original core of the house. The wood plank floor creaked under my boots. Across the room a large window revealed a U-shaped courtyard partially shaded with a porch that edged the perimeter. Emory oaks in several red-brick tree-wells shaded the rest. Beyond was the blue shoulder of the Rincon Mountains.

Inside, the first thing one noticed—if one was aware of such things—was that most of that wood floor was hidden under exceptionally large Navajo rugs of exceptional quality—Two Grey Hills, Ganado, Chinle, Burntwater. Smaller and even finer examples graced the walls, in between pieces of western art hung so casually they could only have been originals—a sketch by Remington, a landscape study from Moran, a Catlin portrait, and, more contemporary but by far the most visually arresting, a Grand Canyon landscape by Peter Nisbet the size of a sheet of plywood, in which the Colorado glinted beneath rain-slicked rock ramparts, and evening-lit golden storm clouds seemed to billow out of the canvas.

The furnishings were a farrago of outrageously hokey mid-fifties cowboy furniture and outrageously expensive English antiques. A wagon wheel chandelier with fake kerosene-lamp globes hung over an Arts and Crafts dining table. A brace of pine and orange-vinyl reading chairs repeated the Westward Ho motif and were lit by a cholla-skeleton lamp with rodeo scenes and a jackalope silkscreened on the shade, while across yet another Two Grey Hills rug a Chesterfield sofa sat regally aloof, its tufted leather a deep burgundy under the glow of a black-shaded Bestlite, Winston Churchill’s favorite desk lamp.

At a beat-up workbench under the Nisbet, Jedediah Carson sat winding silk on the stripping guide of a bamboo fly rod he was finishing for a customer who had ponied up something north of $5,000 in advance for it. He was wearing a headband magnifier and was working by the light of a modern chromatically corrected LED lamp—the cholla lamp and Bestlite were reserved for atmosphere.

Jed pushed back the magnifier, looked up at me, and said, “Damn, son, you look like something pulled half your stuffing out through the back zipper.”

“Damn,” for as far back as I could remember, was the only cuss word Jedediah Carson ever used, but he used it frequently.

I walked over to the bar cart—which rode on miniature wagon wheels and employed a cow horn as a towel rack—poured three fingers of Black Maple Hill 16 into a couple of tumblers, and carried them over to the desk.

He pushed back his chair, set the magnifiers on the desk, and switched off the lamp.

Thirty minutes later he got up and walked around the desk to stand in front of me. So I stood up too, and he enveloped me in a bear hug—which, since Jedediah is a head taller than my five-ten and outweighs me by sixty pounds, actually felt like a bear hug despite his eighty-ish years. Ouch. Hadn’t I mentioned I’d recently been shot? In my ear he said, “Dammit, boy, if I lose you, too, I’ll never forgive you.” To my shock his voice choked up.

That was the thing about Jedediah: Just like his furniture, you could never, ever predict him. 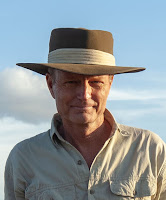 Jonathan Hanson grew up northeast of Tucson, Arizona, with Sabino and Bear Canyons as his backyard, providing him with years of desert expeditions, hunting like the Apaches and building wickiups (which failed spectacularly).
He has since written for a score of outdoor and adventure magazines including Outside, National Geographic Adventure, Nature Conservancy, and Global Adventure, and has authored a dozen books on subjects including natural history, sea kayaking, wildlife tracking, and expedition travel.
Jonathan’s exploration experience encompasses land- and sea-scapes on six continents, from the Atacama Desert to the Beaufort Sea, from the Rift Valley to the Australian Outback, and modes of transportation from sea kayaks to sailboats to bicycles to Land Cruisers.
He has traveled among and worked with cultures as diverse as the Seri Indians and the Himba, the Inuit and the Maasai. Jonathan has taught tracking, natural history writing, four-wheel-driving techniques, and other subjects for many conservation and government organizations.
He is an elected fellow of the Explorers Club and the Royal Geographical Society, and a charter member of Backcountry Hunters and Anglers, and lives in Southern Arizona with his wife of 37 years, Roseann Beggy Hanson.
You can follow Jonathan’s Overland Tech and Travel blog and order signed books at ExploringOverland.com.
FACEBOOK  |  INSTAGRAM
~~~~~~~~~~~~~~~~~~~~~~~~~~~~~~~~~~~~~~~~~~~