Today is a two post sort of day, and up on the docket first is our latest Rachel's Random Resources tour join featuring your next potential must read! It's darker, and a bit scary, but who doesn't like a little fright now and then with a startling who-dun-it just ready and waiting for you? SO, with that in mind, let's get to the intro's, then dive between the pages as we meet today's title in the spotlight... 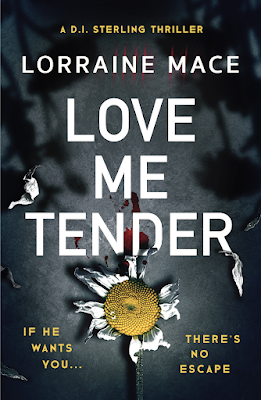 Love Me Tender
by
Lorraine Mace
About the book...
IF HE WANTS YOU . . . THERE'S NO ESCAPE.
A brutal murder . . .
Responding to a tip-off, newly promoted Detective Chief Inspector Paolo Sterling arrives at an apartment block to find the dismembered body of a young woman. And with no indication of a break-in, all signs suggest the killer was known to her.
An abduction in plain sight . . .
Then the victim's friend is snatched with no witnesses and the unanswered questions mount up.
At the same time, Sterling's team are leading the surveillance of a local club, thought to be involved in a drug operation. But when one of his colleagues ends up in hospital close to death, Paolo begins to lose his grip.
A detective on the edge . . .
With the odds stacked against him, and time running out, can DCI Sterling uncover the truth before it's too late? Or will this case finally tip him over the edge?
AMAZON UK
~~~~~~~~~~~~~~~~~~~~~~~~~~~~~~~~~~~
~~~ EXCERPT ~~~
DCI Paolo Sterling is talking to DS Connors (CC) about a drug case that is ongoing at the same time as the murder investigation.
CC nodded. “The day shift are watching The Pipe, but I doubt anything will go down in daylight, sir. Once the Chief gave that press conference and announced his intention of shutting down the clubs known to be involved in drug dealing, the people at The Pipe must have realised they were being watched. I can’t help feeling it would have been better to keep quiet and let us get on with the job without alerting the dealers.”
Paolo sighed. “Probably, but the Chief was dealing with political pressure. It’s always the way, you know that. A kid dead from a drug overdose isn’t news, but the daughter of an MP dead from a drug overdose makes the front page. Sally Mendip’s death forced the Chief’s hand. George Mendip is spouting off in the press that we aren’t doing enough to protect innocent victims, so the Chief felt he had to prove we were on the job.”
CC snorted. “Innocent victim? Is he not aware his daughter was a known user and might even have been a dealer herself?”
Paolo shook his head. “No parent who’s lost a child, no matter what the circumstances, sees them in any light other than the best. We know she was dealing, but on autopsy Dr Royston wasn’t able to determine if her overdose was accidental or deliberate. We can’t even be sure she wasn’t murdered. All we know is that The Pipe seems to be at the centre of the bad drugs flooding our streets. I understand George Mendip’s need to rage and want answers, but Sally isn’t our only victim. We’ve lost too many young people in the last few months and I can’t let his grief affect the way we conduct this investigation.”
~~~~~~~~~~~~~~~~~~~~~~~~~~~~~~~~~~~
About the author...

Born and raised in South East London, Lorraine lived and worked in South Africa, on the Island of Gozo and in France before settling on the Costa del Sol in Spain. She lives with her partner in a traditional Spanish village inland from the coast and enjoys sampling the regional dishes and ever-changing tapas in the local bars. Her knowledge of Spanish is expanding. To stop her waistline from doing the same, she runs five times a week.
Author of the D.I. Sterling series of novels, Lorraine has been engaged in many writing-related activities. A columnist for Writing Magazine, she has recently stepped down from writing two columns for Writers’ Forum and also her role as head judge of the magazine’s monthly fiction competitions in order to concentrate on her own writing. She is currently writing two standalone psychological thrillers for Headline Accent.
She also runs her own private critique and author mentoring service.
SITE | BLOG | TWITTER | FACEBOOK
~~~~~~~~~~~~~~~~~~~~~~~~~~~~~~~~~~~ 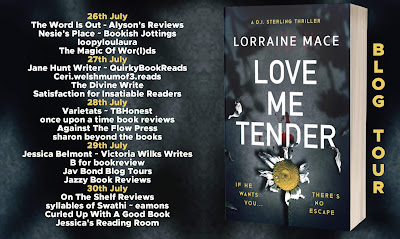