Today, we've got a SPECIAL GUEST POST to share from author Nikola Scott as her latest work, The Orchard Girls, ventures forth through the online bloggy world via Rachel's Random Resources! First, we shall share a spotlight of that very title, and THEN we'll get to the author's generous share of her favourite World War 2 reads! Ready, set, let's read all about it... 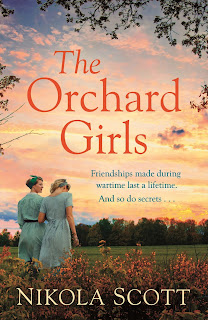 The Orchard Girls
by
Nikola Scott
About the book...
London, 2004. Frankie didn't always have it easy. Growing up motherless, she was raised by her grandmother, who loved her – and betrayed her. For years, the rift between them seemed irreparable. But when their paths suddenly cross again, Frankie is shocked to realise that her grandmother is slowly losing control of her memory. There is a darkness in her past that won't stay buried – secrets going back to wartime that may have a devastating effect on Frankie's own life.
Somerset, 1940. When seventeen-year-old Violet's life is ripped apart by the London Blitz, she runs away to join the Women's Land Army, wanting nothing more than to leave her grief behind. But as well as the terror of enemy air raids, the land girls at Winterbourne Orchards face a powerful enemy closer to home. One terrible night, their courage will be put to the test – and the truth of what happened must be kept hidden, forever . . .
--> SNAG YOUR COPY TODAY <--
~~~~~~~~~~~~~~~~~~~~~~~~~~~~~~
~~~  Fall in Love with History: My Favourite World War 2 Reads  ~~~
...with author Nikola Scott 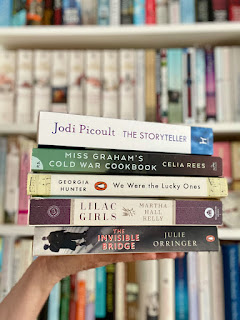 I’ve always loved history. Not so much the grand battles and key dates, but rather, history as it was experienced by actual people: wives seeing their husbands leave for the front, mothers opening the door to devastating news. Families cowering in air raid shelters, seamstresses sewing uniforms, riveters building bombs.
We used to be surrounded by witnesses able to give first-hand accounts of all the things they’d seen in the first half of the last century. But with each passing decade these voices are fading, so it’s especially lucky that we have such an abundance of historical fiction and nonfiction to take us back there.
I’m fascinated especially by the years around the second world war, so much so that two of my novels were set during that time. It was such a pivotal battle of good versus evil, requiring such courage of people from all walks of life. I love reading about these seemingly small acts of bravery coming together to pit humanity against abject horror.
So I’m thrilled to be dropping into the blog today to share a selection of my favourite WW2 reads.
We Were the Lucky Ones by Georgia Hunter
Based on a true story, this novel follows the Kurc family from pre-war years all the way through to the close of the war. Separated and devastated by war’s atrocities, the Kurcs want only one thing: to survive as a family and ultimately reunite. It’s sweeping and powerful – I absolutely loved it.
The Invisible Bridge by Julie Orringer
This one is a little quieter, but its spirit is so beautiful and haunting that it stays with you long after the last page. A Hungarian architecture student arrives in Paris in 1937, tasked to deliver a mysterious letter to a young widow, an errand that will change his life forever…
The Storyteller by Jodi Picoult
This story of a young baker who befriends an old man and realizes the depths of his dark past turns our attention to those who were part of the Nazi regime and got away with it. It deals with difficult questions of retribution and atonement and has a very thought-provoking ending. Jodi Picoult is a wonderful writer, whose books always make you think differently about something familiar.
Lilac Girls by Martha Hall Kelly
On the eve of WW2, the lives of three women – Caroline, a New York socialite, Kasia, a young Polish woman, and Herta, a German doctor – intersect when Kasia is sent to notorious Ravensbrück Concentration Camp. I cannot recommend this enough, it’s such a powerful, fast-paced, gripping read.
Miss Graham’s War by Celia Rees
This is a recent favourite, in which a teacher is sent to 1946 Germany, ostensibly for administrative work and setting up schools, but really to draw remaining Nazis from their hiding places. She uses a cookbook to smuggle coded messages back to England. It’s a vivid portrayal of Germany immediately after the war, and once again challenges some clear-cut black and white assumptions. Get your hankies ready for the ending!
The Orchard Girls by – me!
I’m including one of my own in this list, not just because it’s publishing this week and I’m too excited not to share the thrill of that, but also because it highlights an important part of WW2 history: women in the services. With the men called to the front, women filled many non-traditional roles, affording them new levels of independence and emancipation which weren’t always viewed kindly by the community around them.
The Woman’s Land Army was such a service. They kept the country from starving, but that didn’t necessarily mean they were welcomed with open arms. Farming was a male domain at that time, and the influx of girls – in trousers, on tractors, catching rats and castrating sheep! – aroused a lot of suspicion. I wanted to explore this conflict between age-old prejudices and women determined to do their bit. So The Orchard Girls is set on a 1940 Somerset orchard estate, where a group of Land Girls are forced to hold their own among a hostile community and survive by the power of their friendship and determination.
~~~~~~~~~~~~~~~~~~~~~~~~~~~~~~
About the author...

Nikola Scott started out in book publishing and worked as a crime fiction editor in America and England for many years. Turning her back on blood-spattered paperback covers and dead bodies found in woods, she sat down at her kitchen table one day to start her first novel — and hasn’t stopped writing since. Obsessed with history and family stories (‘How exactly did you feel when your parents gave the house to your brother?’) she is well-known – and feared – for digging up dark secrets at dinner parties and turning them into novels.
Her first two books, My Mother's Shadow and Summer of Secrets, have both been international bestsellers and were translated widely around the world. Nikola lives in Frankfurt with her husband and two boys (and a kitchen table).
Once a month, Nikola sends out a popular newsletter about writing, reading, book news, freebies and loads of therapeutic baking. Join in here if you’d love to be a part of it all: bit.ly/NikolaScottNews
SITE | FACEBOOK | TWITTER |  INSTAGRAM | PINTEREST
~~~~~~~~~~~~~~~~~~~~~~~~~~~~~~~~~

Special thanks to Rachel at Rachel's Random Resources for the chance to bring this tour to you and to author Nikola Scott for the great guest post. (THANKS!) For more information on this title, the author, this promotion, or those on the horizon, feel free to click through the links provided above. This title is available now, so click on over to your favorite online retailer to snag your copy today and be sure to check out the rest of the tour for more bookish fun!

Lovely to meet Nikola. I was saddened not to be able to feature this book but I've added it to my Wish List.