Today, I'm pleased as punch to be hosting a stop along this Rachel's Random Resources tour for a NEW Historical Romance title you won't want to miss! It's from author Amanda McCabe whose work you may already be aware of, but if you haven't yet made her acquaintance, you are sorely missing out! Ready to see why? Please...ALLOW ME! Today's blog tour guest and ebook of choice... 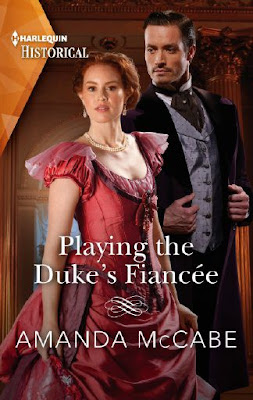 Playing the Duke’s Fiancée
by
Amanda McCabe
About the book...
A pretend proposal
For the unconventional heiress
When American heiress Violet Wilkins crosses paths with William, Duke of Charteris, she has extremely low expectations of the “Duke of Bore.” But when this seemingly stuffy aristocrat offers her escape from a dreadful arranged marriage, she leaps at the chance! To her surprise, the arresting Charles whisks Vi into an exhilarating make-believe romance. And as she gets to know the man behind the title, she can’t help wanting more…
AMAZON US | UK
~~~~~~~~~~~~~~~~~~~~~~~~~~~~~~~~~~~~~~
Oh my goodness, this was SUCH a great read!
Catching up with the Wilkins sisters was pure joy! Reliving the connections already built with characters from previous releases was such fun! Getting to know Violet and the "Duke of Bore" was simply delightful! I honestly can't say I was bored for a moment, felt like wandering from the page, or was tempted by other online pastimes that we all generally feel calling away our time. I was simply glued to the epage, every chance I got, and reveled in getting lost in the story.
Violet was a strong woman, happy to pursue her heart's desires...photography (mind out of the gutter, this is a HISTORICAL Romance...there's generally more couth involved)...despite it being frowned upon by most to do so. I mean, she lived in a time when marriage and an heir was the goal, the standard, the thing to do...but if we learned anything from her sister's story, that's just simply not how the Wilkins girls live! Enter her new neighbor, William...aka the "Duke of Bore". In truth, he's anything but, but reputations are easy to come by and harder to be rid of, so it suited his purpose to leave things as such...at least until he meets Violet. Seen from afar and with no introduction, she already stole into his heart...then we just had to wait for his head to catch up with things! The bargain they strike to meet both their needs temporarily was brilliant, especially since it allowed them more time together to explore what neither could quite acknowledge nor quite deny.
If you're a Historical Romance fan, this is DEFINITELY a MUST READ recommendation from me to you, and if you haven't checked out the author's previous releases, I highly suggest you do.
~~~~~~~~~~~~~~~~~~~~~~~~~~~~~~~~~~~~~~
About the author...

Amanda wrote her first romance at the age of sixteen--a vast historical epic starring all her friends as the characters, written secretly during algebra class (and her parents wondered why math was not her strongest subject...)
She's never since used algebra, but her books have been nominated for many awards, including the RITA Award, the Romantic Times BOOKReviews Reviewers' Choice Award, the Booksellers Best, the National Readers Choice Award, and the Holt Medallion. She lives in Santa Fe with a Poodle, a cat, a wonderful husband, and a very and far too many books and royal memorabilia collections.
When not writing or reading, she loves taking dance classes, collecting cheesy travel souvenirs, and watching the Food Network--even though she doesn't cook.
Amanda also writes as Laurel McKee for Grand Central Publishing, the Elizabethan Mystery Series as Amanda Carmack, and the Manor Cat Mystery Series as Eliza Casey.
SITE | FACEBOOK | INSTAGRAM | PINTEREST | TWITTER
~~~~~~~~~~~~~~~~~~~~~~~~~~~~~~~~~~~~~~

Special thanks to Rachel at Rachel's Random Resources for the chance to bring this tour to you as well as the ecopy for review. (THANKS!) For more information on this title, the author, this promotion, or those on the horizon, feel free to click through the links provided above. This title is available now, so click on over to your favorite online retailer to snag your copy today and be sure to check out the rest of the tour for more bookish fun... 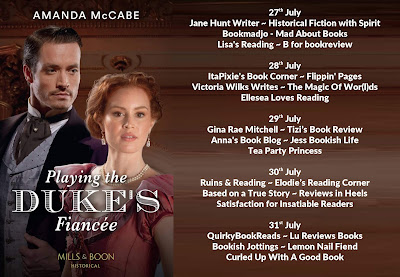