Today, we're welcoming playing host to a stop along the Historical Fiction Virtual Book Tours route for a Young Adult Historical Mystery!  (Fitting, right?  ^-^)  It stars the work of a new-to-me author that really brought something special to the page.  So, grab your gumption and prepare, there's danger ahead as we meet today's book of choice... 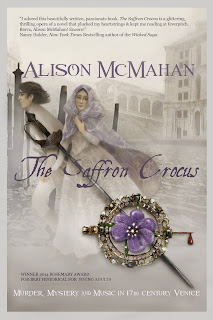 About the book...
Venice, 1643. Isabella, fifteen, longs to sing in Monteverdi’s Choir, but only boys (and castrati) can do that. Her singing teacher, Margherita, introduces her to a new wonder: opera! Then Isabella finds Margherita murdered. Now people keep trying to kill Margherita’s handsome rogue of a son, Rafaele.

Was Margherita killed so someone could steal her saffron business? Or was it a disgruntled lover, as Margherita—unbeknownst to Isabella—was one of Venice’s wealthiest courtesans?

Or will Isabella and Rafaele find the answer deep in Margherita’s past, buried in the Jewish Ghetto?

Isabella has to solve the mystery of the Saffron Crocus before Rafaele hangs for a murder he didn’t commit, though she fears the truth will drive her and the man she loves irrevocably apart. 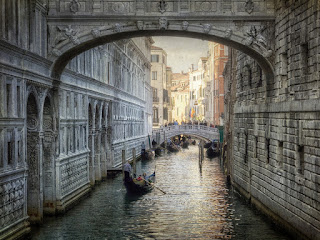 A fast paced, young adult read filled with the mystery promised and so much more.

It speaks of a time when women were respected and yet only so much.  They were permitted to be seen but not speak their own minds freely.  They were allowed to visit with male callers but not without a chaperon in attendance.  They were given the chance to let their voices soar in song, but only in the venues chosen by the men that surrounded them.  Yes ladies, it was a man's world.  *grumble grumble* For our leading lady Isabella, that proved a very difficult point to accept for she desired to sing in the infamous all male choir and wouldn't you know it, between fate and circumstance...she got just what she wanted.  Or did she?  You see, that "dream come true" came at a price most high with consequences undesired and a change of heart most unexpected.  Though it fulfilled one wish, it opened the door to so many more...good thing she's not a girl to take things lying down.

I really enjoyed getting to know Isabella.  She was full of spunk and a healthy appetite for life despite the fact that society wasn't really in her favor at the time.  She didn't let the day rule her though it tried; she let her heart and mind work together to sort through the good, bad, and deadly.  Her unanticipated (yet arranged to some degree by his own mother, Margherita...who has an interesting past of her own!) connection with Rafaele packed a punch, though little in any form of "action" actually occurs.  That's right ladies and gents, it's back to a time when the words both said and unsaid really made a difference as well as the belief in one another.  Speaking of Rafaele, though he acted the spoiled brat at times, he wasn't without his good qualities, the more of which came out as he learned about his own history.  It was great watching him grow from the experiences he had as well as the reciprocated feelings from one lovely girl.  The tortures he survives are certainly stomach clenching but the limited detail included won't have you face first over any buckets any time soon.  (Good balance!) 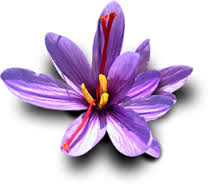 In conclusion, whether a fan of Historical Fiction or simply the Young Adult genre, this book has something that will appeal to you.  The musical inclusions along the way make the story soar right off the page and into your heart as we say hello and goodbye to several souls along the way.  The mystery at its heart is actually bigger than itself and extends to several key people you won't necessarily expect truly keeping you on your toes as you make your way through the labyrinth.  Recommended as much for its beauty and grace as for its murder and mystery to teen through adult readers. 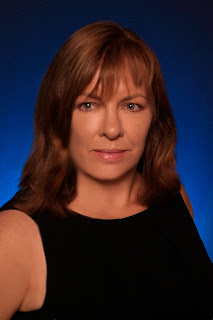 Alison McMahan chased footage for her documentaries through jungles in Honduras and Cambodia, favelas in Brazil and racetracks in the U.S. She brings the same sense of adventure to her award-winning books of historical mystery and romantic adventure for teens and adults. Her latest publication is The Saffron Crocus, a historical mystery for young. Murder, Mystery & Music in 17th Century Venice.

She loves hearing from readers!
Connect with her today via these online sites...

Special thanks to Amy at HFVT for the review copy as well as the chance to bring this tour to you!  (THANKS!)  For more information on THIS TOUR, the title, author, publisher, or future promotions, feel free to click through the links provided above.  This title celebrated its book birthday December 2014 via Black Opal Books, so be on the lookout for it on a bookstore shelf or online retailer of your choosing.